So a couple of weeks ago this started and i hoped it would go away but its not. Ive been to Audi and they want £60 to plug it in... Even though he told me that there computer has said its the switch (But its not he said...?) I had taken my car in for something else and asked about this thats how i know this.

So i said i would have it done but cancelled as i could not make it but then I'm thinking maybe i can sort it.

The dash lights won't come on but the needles do and other buttons. The lights outside stay on all the time now when the car is started and the light switch won't do anything, no fog lights either. I also don't get the home lights anymore.

Its now saying the rear brake light is out too (Bulb is fine but not lighting up) So ill be getting new ones today i hope and see if that helps but does anyone have a clue whats up here?

Ive had both sides out at the back to look of rust and everything is clean within my lights.

Please check the video out and you will see.

Many Thanks!
Team Nardo

Where in the country are you? Best idea is to find somebody with VCDS and offer a couple of beer tokens to diagnose it for you.
Genuine Ross-Tech VCDS Owner - Lincolnshire & Humber Area
A

Have you checked all your fuses? Check the owners handbook to see if any fuses correspond to the problem that you are suffering. Might be that simple.
2012 A4 2.0 TFSi Quattro

Agreed water in the cem , if it was anything like mine 2010 avant it was pretty damp. Easy to take out and open up. Stuck mine in the airing cupboard to dry out. Then cleaned the obviously dirty contacts with acf50. Put back together, back in car and a generous spray of acf50 in the rear compartment. No faults on dash and everything fine! Think my water is coming form rear was wipe.
NULL

I must be think, whats a CEM? Ill give that ago.

Not looked at fuses but didn't think it would of been them, guess i should look there too.

Thanks for the help by the way
Team Nardo

Not sure what it stands for but think it is the control unit? Mine is an avant and is located in the boot on the right side and lies flat on the floor with two plugs going into it. Whatever you do though is don't turn the ignition on with it removed!
NULL

Yeah I've got the avant too, do you mean in the bit where you remove the side panel (12v socket in) and its in there? Think there is some fuses as you open it?

Eigdoog said:
Yeah I've got the avant too, do you mean in the bit where you remove the side panel (12v socket in) and its in there? Think there is some fuses as you open it?

Yep that's the one, some fuses! Personally never seen so many fuses in a car! My right side was soaked! Stuck an electric fan in the boot to dry it out!

Box lies flat on the floor close to the arch, clips out and then remove the two plugs. The box then can be split in half quite easy. Just be careful with the contacts inside. I could take a picture tomorrow if you want?
NULL

Why would the module in the boot affect all the lights? As far as I can tell all the headlights, dash light fogs etc are all controlled by the Onboard supply control unit J519.
The fuses for this are located in the end of the dash fuse box 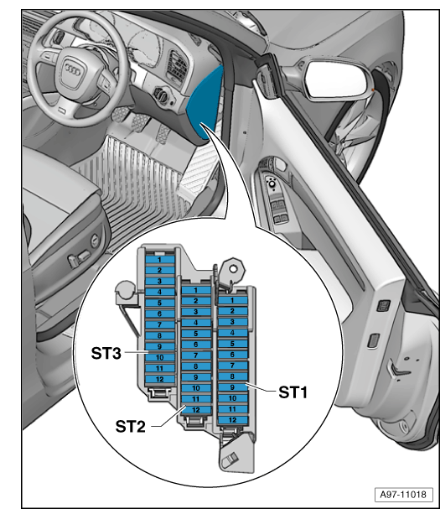 The CCM in the boot seems to control all the rear lights and indicators and a few other things. Unless they are linked somehow.

CCM, that's what caused my issues and is in the boot, it effected my rear lights, brake lights and reversing sensors and get you home lighto. Not sure if connected to anything at the front but might be as I said mine had water ingress. Cleaned and dried solved all my issues.
NULL

Ill be looking into both thanks! Yeah a picture would be great thank you!

Hope i can get this fixed.
Team Nardo

Not sure if this will help.
I bought my B8 avant last October and the car came with a fault "vehicle lights malfunction" which the dealer had in garage and replaced a module in behind the fuse box on drivers door side. The symptoms my car had was dash board illumination lights not working and believe it or not the wipers would fail!! I put the car in to Portadown Audi and they diagnosed it straight away - wiper motor!! You might think this strange but because the wiper motor had an intermittent fault each time it was failing it brought the cars Linbus system down which handled the communication to lights, wipers, etc.

Not saying that this is your issue but I suspected water and .....

Hope you get sorted!

Well i think my mirror is always dimmed now and i don't think the auto wipers work either.

Does sound like it could be the problem? Ill look into this too cheers!
Team Nardo

Eigdoog said:
Well i think my mirror is always dimmed now and i don't think the auto wipers work either.

Does sound like it could be the problem? Ill look into this too cheers!
Click to expand...

Yes, could be. I had the car at an independent garage first (with dealer level computer) but computer just told him to replace auto light switch and rain/light sensor in rear view mirror. We replaced these to no avail that's why it ended up in Audi! Was do glad to get sorted!
S

Hey Eigdoog, have you got this issue sorted yet? We seem to have a pretty much identical problem (although my A4 is a B6).

I had an issue with my A4 constantly throwing up a warning for the left rear fog light... which is weird, because its a RHD car and only has a right rear fog light. So my car seems to think its a LHD model, but I can live with that! lol. Anyway, I checked the right rear fog light and the bottom contact on the bulb had almost completely warn away as, I'm guessing, the result of arcing. So I cleaned the springy contact and replaced the bulb and that cleared up the LEFT rear fog light warning. But now I'm still getting intermittent problems with all external lights not working except dipped beam and brake lights. Also ALL backlight illumination on the dash (except needles), centre console and all buttons around the car seem to have a mind of their own.

At first I thought it could be the CCM/CEM but the carpets where its located on the B6 (under the front passenger side carpet) don't feel damp. I'm going to try to take a look at it for any signs of water ingress this week but I found an interesting (VW) thread that mentions the J519 unit and similar problems (only that was all the right hand lights front and back not working). Anyway, at first they thought it could be a fault CCM/CMM, and even replaced it, but it turned out that the problems were caused by the blade of a fuse being damaged and, bizarrely, it wasn't even a fuse related to anything to do with the lights; it was a fuse for the ABS! Changing that fixed the problems with the lights!

Now I'm wondering if all that constant arcing from the dodgy contacts on the right rear fog light caused other surging or electrical overheating in the fusebox and thus damaged any fuse blades. So, as someone else has pointed out, it might be worth pulling out and checking ALL the fuses, just to see if ANY of the blades aren't damaged. I'm going to do this tomorrow before I take my car back to an independent specialists next week.

I'll report back here what I find as, like I said, even our problems are practically identical.

It turned out i got the lights switch from eBay for about £20 and changed it over and its been fine ever since! Just to make it clear its the switch (RHD) near the steering wheel to the right then down a little. So you can change from auto to manual lights.

I could not find ANY water anywhere in the car and i just think it was faulty switch.

Hope this helps others!
Team Nardo

Hello!
I have a strange error: Fault Vehicle Lighting ...
This problem appears from nowhere, all bulbs are ok, i have checked with VCDS and i don't have errors ...
What it is strange,if i am connect with BCM , the errors from dashboard disappears till i am connect with BCM, after disconnect from BCM the triangle it is there...
I have been to dealer, but the guys was so entry level, and they didn't find the solution, they want to leave the car there to look forward for a lot of money, but i didn't want...
Thank you so much,
Bogdan

Had this same issue with my Octavia vRS, fault would display on mfd and triangle light warning but all lights worked fine. Strange thing was, when I plugged it in to Obdeleven and scanned the car, fault would disappear and nothing would be logged but would come back as soon as the car was started.

After accepting the inevitable, I took it to a Skoda dealer and was prepared for a big bill.
After over 3 hours of workshop time, they couldn't find a fault. After the dealer sent some info off to Skoda HQ, they were given other things to check, they finally fixed it. It turned out to be to rain/light sensor in the windscreen. The unit didn't need to be replaced, it just needed to have the values and parameters reset. Tech told me that it would of been impossible to do on anything other than the dealer system as Skoda had to send a file to load onto the car.

Garage only billed me 1 hour labour in the end as they said it was something they have never seen before.
B