Where can I find out where "V6T" badges should sit on my wings?

So the lettering/badges on my wings on one or both wings are positioned wrong & it's really bugging me!

On one the "T" looks too high, on the either side the gaps between the letters seem wrong.

Want to sort them out by either replacing them or removing & re positioning with fresh double sided tape, although that will be fiddly!

Ditch the V6 T, it's not Turbocharged and get yourself some Supercharger badges!

Germans say "T" is good ya?

Edit:- my non Audi but look okay Supercharged badges that were bought many years ago are still waiting for action, I was worried that when I swopped them I would have that "are they straight/right height?" problem.
NULL

The T is for forced induction TFSI not turbo, id stick with the V6T or go none at all as every man and his dog goes for the supercharged badges ( no offence to anyone had a couple of pairs myself )

You could use the supercharged badge fitting template i imagine
http://bd8ba3c866c8cbc330ab-7b26c6f...rackcdn.com/supercharged_badge_placement2.pdf
"Team Chav 2016 "

Cheers all, especially "xpoweruk" that looks just the job to get it lined up.

Chop. said:
The T is for forced induction TFSI not turbo, id stick with the V6T or go none at all as every man and his dog goes for the supercharged badges ( no offence to anyone had a couple of pairs myself )

Just put them where your happy with them thats what i would do
Click to expand...

According to Audi's own glossary, the "T" in "TFSI" does stand for "Turbo".

From what iv seen that unless your into audis the supercharged one we have is prob the least know, even had a stand up argument with an s3 owner one time who was adiment my car couldnt be supercharged as it was an s4, very funny
Follow me on Instagram black_audi_s4

Chop. said:
The T is for forced induction TFSI not turbo
Click to expand...

We've all done it.

Russboy said:
Hmm, I wonder if V6 & supercharged is too much!!
Click to expand...

Mine came with the 'model designation delete' option and I had thought about refitting 'V6S' on the front wings instead of 'V6T', that could be an option if you could find an 'S' in the same font.


xpoweruk said:
You could use the supercharged badge fitting template i imagine
http://bd8ba3c866c8cbc330ab-7b26c6f...rackcdn.com/supercharged_badge_placement2.pdf
Click to expand...

haha iv obviously heard that somewhere or more likely just made it up in my head :-/ but i'm not afraid to admit when i'm wrong unless its at home
Follow me on Instagram black_audi_s4

'Just to clarify, the "T" is to denote the TFSI technology which reduces emissions, increases power and fuel economy.

The FSI part is very clever and combined with forced induction it creates Turbo fuel stratified injection (TFSI). Its very clever hence why Audi feel they need to highlight it in the badge. Its avail on a few of the powertrains and the FSI part is famous for being on the B7 RS4 4.2 taking the old 4.2 v8 from the B6 S4 and adding an extra 74 BHP (340 to 414 or 344ps to 420ps, pet hate when ps figures are quted as bhp figures - 1bhp = 0.987ps) and increased fuel economy, although its not just the FSI part and is helped by other modifications and technologies. Just FSI is said to increase power by as much as 15 percent.

Instead of trying to explain it further, here is the Wiki info:

Turbo fuel stratified injection (TFSI) denotes a type of forced-aspiration ("turbo") engine where the fuel is pressure-injected straight into the combustion chamber in such a way as to create a stratified charge. FSI (VAG) direct injection technology increases the torque and power of spark-ignition engines, makes them as much as 15 percent more economical and reduces exhaust emissions.

Some advantages of TFSI engines: 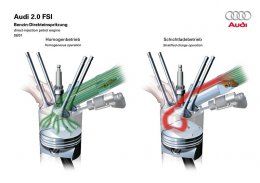 So basically the T is is part of the overall induction technology title, not specific to turbo's or superchargers.


For me, the OEM badge is the correct one, but the supercharged badges do look good.

I'll see how I feel when I get mine, currently stills searching (5 months so far) for the right B7 RS4 but beginning to think the right choice would be a B8 S4 to replace the B6 S4.

Sorry for the long winded write up, had to do it.'

Well, stage one is done, gotta love the fishing line trick to remove them, no dents from screwdrivers, no snapped finger nails!

Hopefully these will turn up this week: Good choice! Went for them myself

The red goes well with the calipers I think.

where can i find year car was built?

A
Rear splitter - where to find

Where can I get gunmetal 19" peeler reps??

J
Where can I go to get this fitted?