What Would You Do?

Took it to a specialist to have a cambelt done. Before the car went in, it was motoring perfect - only 23k , owned from new.

No clunks, issues, knocking - one of the smoother diesels Ive ever driven really.

Took it back in, the place is an hour away from me, waiting five hours for it to be looked at.

They cant find anything wrong with - timing is correct etc, no fault codes, so nothing apparently what they have touched has failed or been done incorrectly.

They investigate further, then come to me with a read out of the Exhaust Gas Sensors, saying number 1 is fluctuating (print out shows static) and that could be the culprit, sensor 2 they dont believe exists hence why its showing 0. The other sensors when unplugged bring up fault codes, but number 1 dosent.

I have no reason not to trust them, they seem pretty decent fellas other than when it came to the end of the day, they then charged me £72 investigation time, to investigate a problem that wasnt there the day it went into the garage, to being there the day it came out. At no point was charging discussed prior. 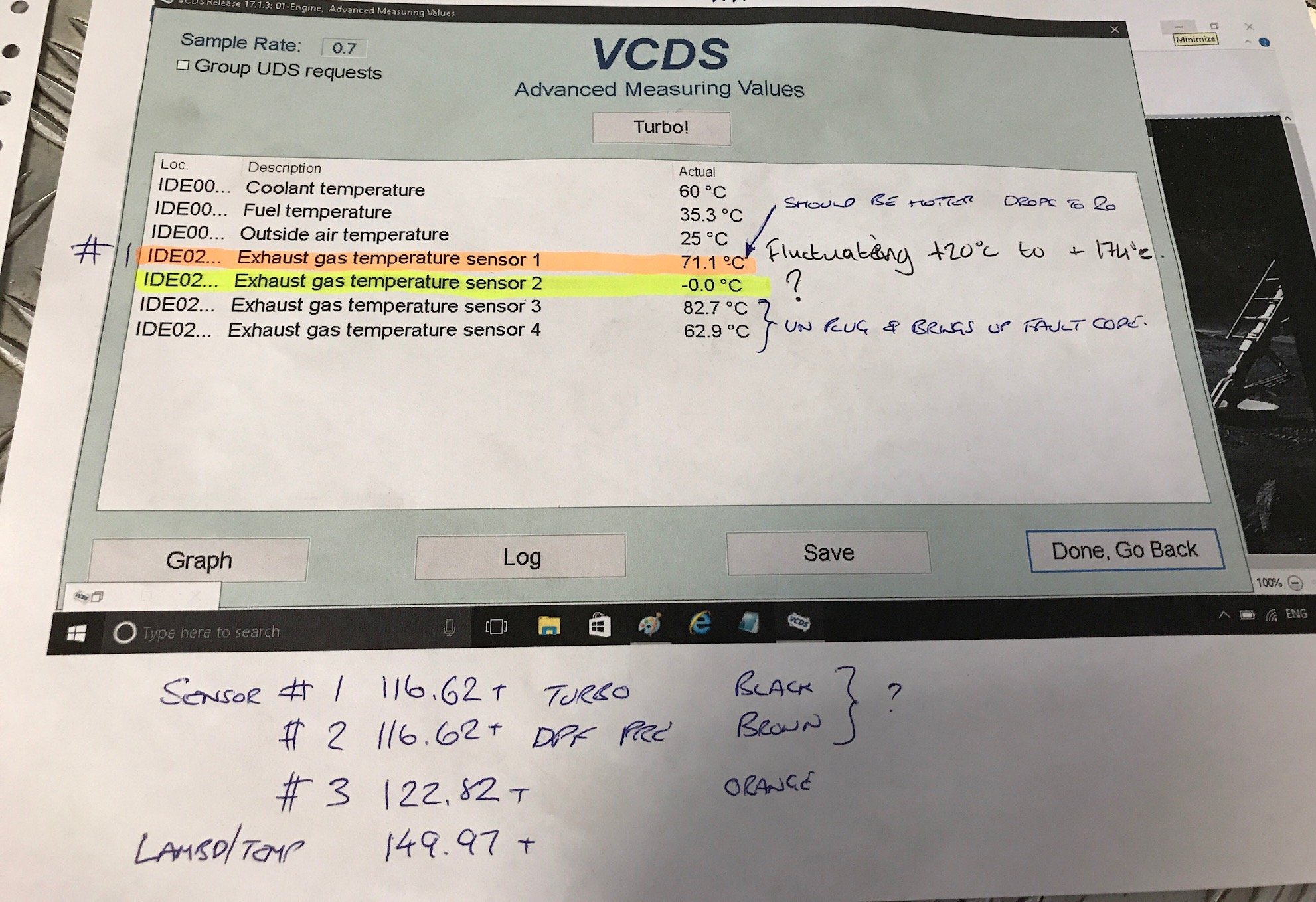 The owner did step in and say he would include the fitting of the new sensor in that charge, so he was being pretty fair (I think) , but the sensor is a further £120+VAT, so overall another £200 spent, which has negated almost the saving of going to the Specialist over Audi - and thus a load of hassle and running round - and it may not work!

£200 is a lot to me at the moment, but I really do need to get my MPG back. It dosent *seem* related to the work done, but it seems far too coincidental to of happened in the 24 hours they had the vehicle for?

I litereally wish I had never had any work done at this point.

Sounds to me that the timing is NOT correct, how does it drive ?
NULL

joinerman said:
Sounds to me that the timing is NOT correct, how does it drive ?
Click to expand...

The valve timing is fine, it would run off on a cylinder if not and be lumpy. I was more interested in the Injection Pump timing being out - but they swear blind it is fine after checking it over.

So , I replaced this part, at another 200 quid, and low and behold, still exactly the same MPG issue.

So car goes in to specialist fine, comes out with 20percent loss on fuel economy. They then charge me further to investigate said issue that happened while the vehicle was with them, replaced a part they 'suspected' could of have something to do with it, and still, car still twenty percent down.

Not entirely sure what to do now.
Daytona Grey Saloon S-Tronic Quattro Black Edition
​
G

I think you'll be heading to Audi, or to a better specialist, then giving the first lot the invoice if you can prove incompetence. It probably won't run rough if cam timing advance or ****** is only one tooth out but it will have an impact on performance and economy. Get it checked elsewhere.
You must log in or register to reply here.
Share:
Facebook Twitter Reddit Pinterest Tumblr WhatsApp Email Share Link

S
what would you do?

A
What would you do!

What would you do?

What would you do?

J
What would you do?