Quick question, we had our cam belt changed on our a3 etron 2015 last year. They said they normally change the cam belt and water pump at the same time. At the end they said we don't need to change the water pump as there isn't one. Is that right? If so what is there instead of the water pump to get the coolant around. Thanks in advance.
U

It seems like your question will remain unanswered for a long time here. I can recommend you to ask the same thing here https://somespeed.com/ . You will receive replies soon, and quite likely you'll get the solution to your problem as well. Hope it helps.

That's not very fair, @Uselek. It's not a very common model, so it just might take a little longer than usual.

@Ercsi83: There is a water pump. From what I can find out, your car is likely to have a CUKB engine (there should be a sticker on the inside front cover of your service book which will confirm or not). The one pictured here is not the exact item for your vehicle (so don't be guided by the part numbers), but it's the best pair of images (including both sides) I can find of the type. It's belt driven, and looks to sit right at the bottom of the loop. 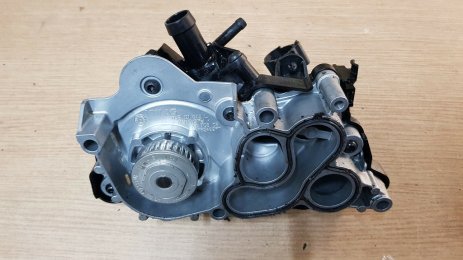 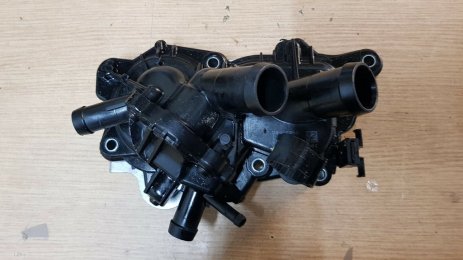 It's not really a life/death issue that the pump wasn't changed at the same time as the belt - it's done that way because you might as well renew the pump when you're replacing the belt, as they tend not to be terribly expensive (although aftermarket ones for your engine are getting on for £100, which is more than most), and if the pump does need replacement at some point it's basically doing the cam belt job again. Full disclosure: there are some horror stories on the internet of seized pumps causing belts to slip/jump or break, which is bad news for the engine, but generally that only happens in very rare circumstances... i) water pumps seizing is not a hugely common occurence, and ii) if the impeller is plastic (which in yours it should be), if ever it does seize because of a problem on the coolant side, it's more likely to shear off - in that case the engine will start to overheat, but it won't come to harm by way of the cam belt. If the pump's drive side bearings fail, there is potential for damage to the engine. The chance of that is low if the belt tensioner has been in good order (such that the tension doesn't significantly vary between old and new belt), but it's not impossible.

All that said, it's a bit bobbins that the garage told you there isn't a pump (actually you might even have two - it looks like some models have an electrically driven aux pump (which generally aren't changed on a routine basis)); you might want to have a blow in their ear about they came to that conclusion. In all likelihood, the same pump will still be working when it's ready for its next belt, but if you want absolute peace of mind it's better changed than not, although I'd be inclined to i) want a significant contribution toward the cost from the garage, or ii) take it somewhere they know there's a pump - but of course there you'll be liable for all the cost.

I don't mean to make you worry, but are you certain the garage did the other important stuff when they did the belt - i.e. tensioner, roller/idler?

H
Springs question for a3 sportback