I have just heard from a friend who does car finance that as of about 4pm today VAG group have cancelled all vehicle deliveries if the car has the 'tech pack'.
No more details given yet as to whether this is a software, hardware or license issue or even what it specifically relates to!
He has cars being delivered tomorrow and now they are cancelled, he spoke to a dealer who has 14 cars that were supposed to go out tomorrow!
Has anyone heard anything?
If I get any updates I will post them here.

Due to take delivery of an S3 on Monday. Had an email from my dealer this morning with the following:

The Audi Phone Box (GB1) option normally includes a component which amplifies mobile phone signals. Regrettably, due to technical and regulatory constraints, we are unable to provide this function at this moment in time.

All other functions of the Audi Phone Box (GB1) option, such as wireless charging and dual phone Bluetooth connection will continue to be fully operational without any restrictions.

The Audi Phone Box (GB1) option will become available in the coming months once we can overcome the technical and regulatory constraints. Our priority is to minimise the disruption for any of our customers as much as possible.

As part of managing this situation, customers who are awaiting delivery of a vehicle fitted with Audi Phone box (GB1) will not be able to take delivery of their new or used Audi until the initial technical solution has been applied to the vehicle. This involves the vehicle’s amplifying component being removed.Once the amplifier is removed the wireless charging will still function as normal, but there may be a slight reduction in signal strength when using the Phone Box

Vehicles equipped with option GB1 now have a registration and handover block, which will only be lifted once Audi UK can validate that the required initial technical solution has been carried out and that customers have been made aware.
Click to expand...

Basically had to agree to the fact they'll be removing the signal amplifier today if I wanted to still be able to take delivery. Any idea if there'll be offering to reconnect the amplifier once they've resolved the issues - assuming they do!

There was something to it then. Doesn't sound too serious to be honest.
I am sure they will fix it later on.
Good luck collecting the car on Monday.

Yes. In the UK, OFCOM have banned the use of mobile phone aerial amplifiers, such as the one used to connect the audi phone box to the roof aerial.

The sale and use of such aerials is now illegal in the UK, hence the phone box option cannot be supplied into the UK, or would require a dealer modification to remove the aerial, which may mean that a phone in the box gets no reception.

OFCOM now only permit the use of "smart aerial amplifiers" which are able to detect exactly which network the phone wants to connect to, and allow the network to log into the car and remotely control or disable the amplifier. Currently there is only one company which can produce these extremely complex amplifiers, and the price is about 5x the price of a conventional amplifier.

What about all the cars they've already sold and delivered with it optioned?
M

No idea what it means. I'd guess if a customer was bothered and wanted a legal car, the dealer could disconnect the aerial.

In practice, it only matters for the customer if the mobile phone network makes a complaint to OFCOM about interference your car, which I just don't see happening with this type of amplifier system, where the signal is only piped in and out of a tiny box.

Similar 'issues' with some new SEAT's too
https://forums.seatcupra.net/index.php?threads/attention-anyone-due-to-collect-new-car.444013/

In a nutshell -
'It has come to light that the signal-boosting technology has been found to be capable of receiving signals from restricted sources and organisations that are ordinarily illegal to intercept.

In the interests of public security and regulatory constraints, SEAT has taken the decision to immediately stop deliveries of all new and used vehicles containing these wireless charging phone boxes.

The issue does not affect customers’ safety and from the limited details we have been given it certainly sounds fixable, the actual technology working effectively – perhaps overly so – and the aim being to ensure that customers will no longer be able to receive data that they shouldn’t have access to.'

Hmmm what interesting sources of information can we get access to? lol
M

Restricted sources and organisations. LOL. Someone is trying to make this sound more exciting than it really is.

Technically, mobile phone signal repeaters/boosters have always been illegal in the UK without a licence. However, the law wasn't very clear, and people selling mobile phone boosters would argue that they were legal, as all you had to do was make sure that it didn't cause interference. Indeed, many people have been using them for many years with no issues, both in-car systems like the phone box, or building systems for homes in remote areas. In general, with correctly installed and designed systems there have been very few problems, and the authorities were not particularly interested in the issue.

In August of last year, OFCOM announced that they were investigating the issue of mobile phone signal repeaters and said that they intended to legalise the use of low-power mobile phone boosters, such as in-car systems, so that they could be used without the need for a licence.

At the end of March 2018, OFCOM announced that they were making the use of in-car mobile phone repeaters legal.

The problem, however, was the small print. In order to be legal, an in-car booster needs to be an extremely sophisticated device, almost as complex as an entire phone, rather than just an off-the-shelf signal booster circuit. Even the most sophisticated repeaters on the market designed for things like cruise ships with thousands of guests do not have systems as advanced as that which OFCOM are requiring for an in-car system.

The problem is that now that OFCOM has specifically said that things like the phone box are illegal without a licence, companies like Audi/VW have little choice but to comply with the law by stopping to sell these things, or redesign them (however, given that this is a UK only requirement, and the cost of the technology required is substantial, the mobile phone box may need to become a significantly more expensive option).

Tom.H said:
What about all the cars they've already sold and delivered with it optioned?
Click to expand...

Good question, wonder if a recall will be required when a proper fix has been found.

I spoke to my dealer today and he said the amplifier will be removed at the factory for cars up to build week 22. Cars after week 22 will be pushed back to an estimated build week 42!!!

Paul Gilham said:
I spoke to my dealer today and he said the amplifier will be removed at the factory for cars up to build week 22. Cars after week 22 will be pushed back to an estimated build week 42!!!

Great, ordered an A4 Avant Black Edition with Tech Pack a couple of weeks ago and not had a build week yet. Gonna be ages

DaveW said:
Great, ordered an A4 Avant Black Edition with Tech Pack a couple of weeks ago and not had a build week yet. Gonna be ages

Hmmmm would’ve thought you’d have a build week by now. Have you added your order number to your Audi online account? Should show you your build date then

Ordered 9th April and still have this. 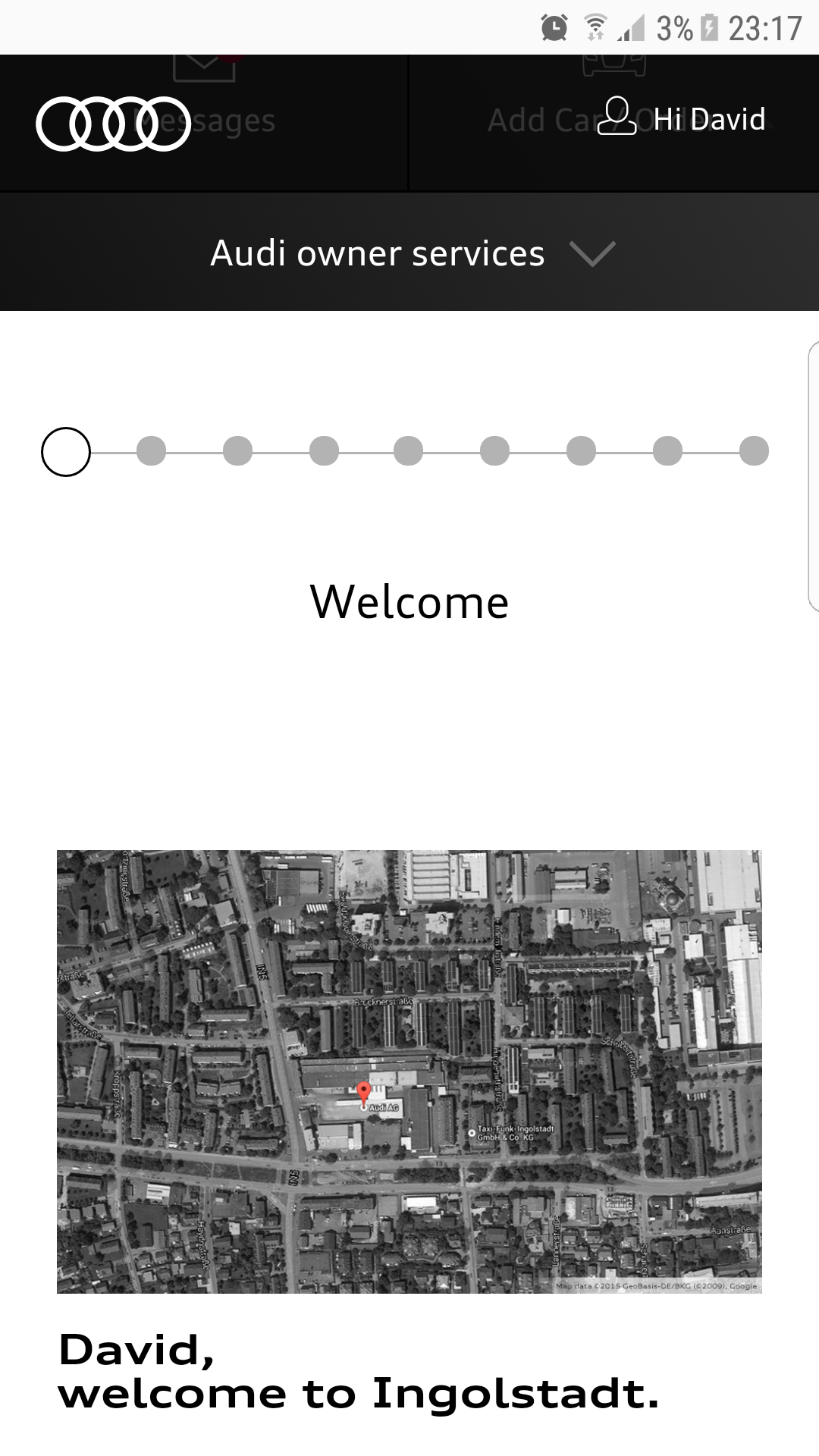 Did you get an email from Audi with your order number? If you did hit the “Add Order” button next to the “Messages” button on that page

Get on to your dealer if not 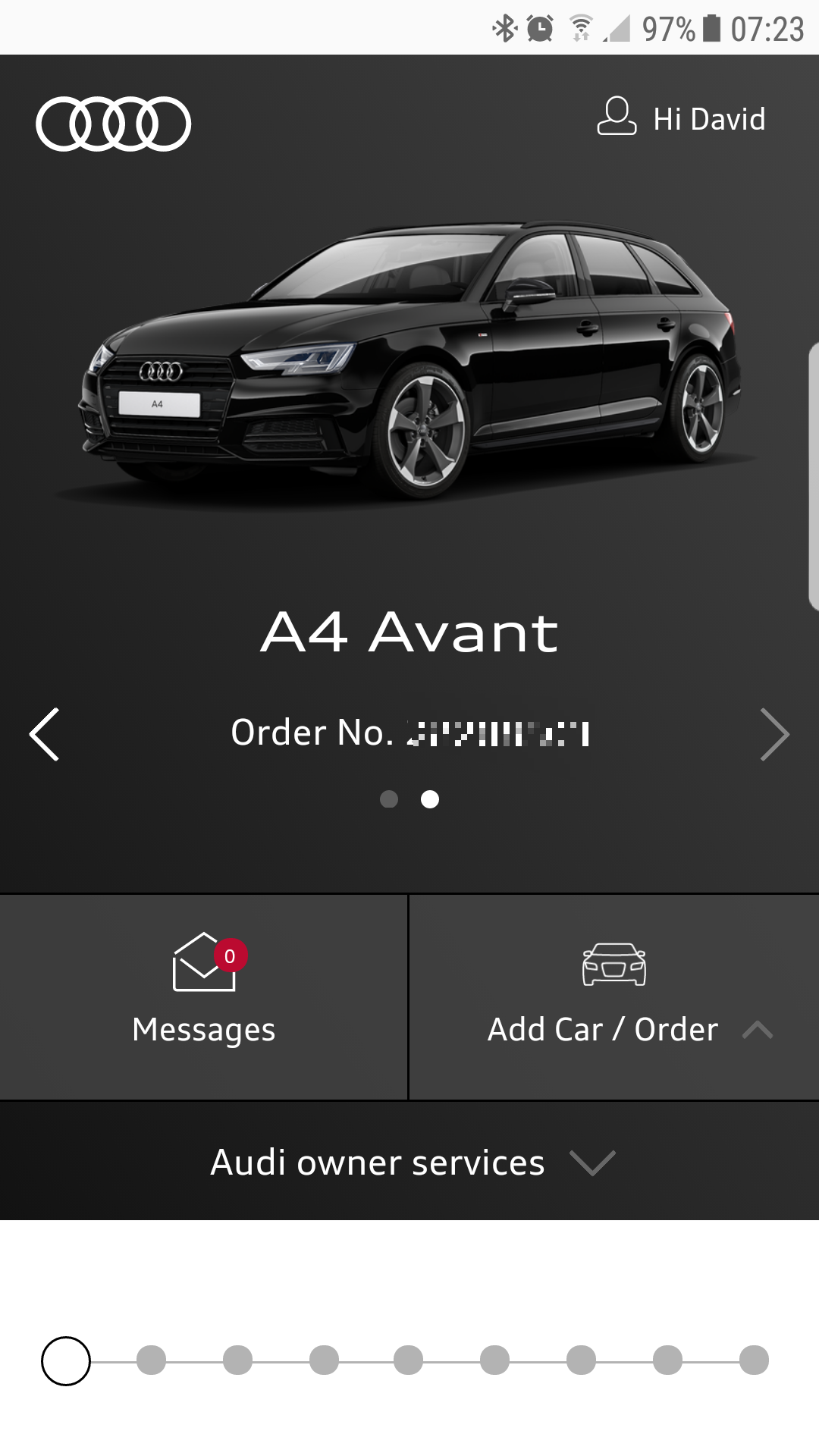 New to Audi having been driving BMWs for last 15 years.
Looking forward to delivery but car has been at Emden since 4-4-18 and still waiting for next update.
As above, the phone box problem seems to have delayed it. Not sure if they will/have disabled or removed the amplifier or how much longer things will take. No-ones fault but was hoping it wouldn't be 3 weeks at the port and still going!

I got an email from my dealer today asking me to sign this form. He thinks my car will get built in week 19 as planned but dealers aren’t being told until mid next week.

Paul Gilham said:
I got an email from my dealer today asking me to sign this form. He thinks my car will get built in week 19 as planned but dealers aren’t being told until mid next week.

The letter makes sense till it says “This does not apply to vehicles built with the Audi Phone Box with wireless charging”... Surely it only applies to those vehicles??? Am I being dense?

Anyone A Tech For Vag??

Anyone A Tech For Vag??