My turbo intermittently seems to just not function. Is this Spool Up Lag? There are no unusable noises, nor specifically related error codes & when it does work it seems fine. Now, there is an underlying engine camshaft error, with codes p0341, p0011 & p000a, that I believe may be the culprit, but I'm just not 100% sure why, if indeed I'm right.

To cut a very long 2 year story short, I have a hot start issue, cause by a failing intake camshaft, which I believe was caused by a PCV Valve failure 2 years ago (cambridge mesh related I think). I've listed the error codes above just for reference.

I suppose my question is, would / could this situation cause or force the engine to disable the turbo? It's a long shot question because I don't see how it's physically possible for the engine to do that at will to a turbo, but I'm an amateur mechanic at best, one who is very willing to learn, so I could be clutching at straws.

Any thoughts, ideas or insights would be very much appreciated.

The turbo will never be truly disabled. However, if the wastegate valve is electronic rather than pneumatic, it is possible for the ECU to restrict operation under certain "self preservation" circumstances.

I have to ask the question though. Why have you not resolved these other issues already? If the camshaft "failure" was caused by the PCV two years ago, then why is it still unrepaired? Unrepaired issues can, and generally will, have a massive snowball effect.
He steals your girl, you get over it. He steals your Audi, you hunt him down..
P

Thanks for your reply.


Garrett 69 said:
The turbo will never be truly disabled. However, if the wastegate valve is electronic rather than pneumatic, it is possible for the ECU to restrict operation under certain "self preservation" circumstances.
Click to expand...

I believe it's electronic, so that would make sense, yes.


Garrett 69 said:
I have to ask the question though. Why have you not resolved these other issues already? If the camshaft "failure" was caused by the PCV two years ago, then why is it still unrepaired? Unrepaired issues can, and generally will, have a massive snowball effect.
Click to expand...

That is a very good question, hence the reason for my "very long story" comment...

At the time of failure there were many opinions being thrown my way, mostly valid and constructive ones. At that time I knew nothing whatsoever about my engine. So, I listened, acted and reacted accordingly. I spent money on a new PCV Valve, a new cambridge and an N80 Valve. The majority of issues were resolved by replacing the PCV Valve, but there was still a stalling issue, an EPC light, a chug and a hot start issue. I was told by 'experts' that the issue was the N80 Valve, so I changed it, but no, it wasn't that. I was told it was the Fuel Pump Relay, so I changed it; nope. I was told it was the Fuel Pump, so I changed it, but again, nope. Then my engine overheated on the way to a friend's and 8 hours later I was recovered; thanks RAC, not. Then the pandemic hit & I was out of work. During that time I took the time to learn about my engine, more through necessity, and I changed the Water Pump, which is what was advised by the 'experts'. The overheating issue persisted. I took the front of my car off, then the timing cover, and discovered the Balance Shaft chain had stretched so far that it was hanging loose, hence the reason for the overheating. So, over several weeks I learned my craft & I changed the timing chains, Runners & Tensioners...

At this point I was still learning about my engine and the elements thereof. I invested in code reading equipment (VCDS, ThinkDriver, etc), discovered MANY codes, and acted accordingly. I replaced the Cam Timing Sensor, the Cam VVT Magnet & Valve, another Bridge, both Pressure Sensors, but still had the Hot Start issue. I replaced the Belt Tensioner & Belt & the HPFP Rocker (or whatever it's called). The 'experts' all told me it was this & that, my engine needed replacing, etc. One garage charged me £350 to look, only to tell me they wouldn't touch it. Even a local Audi 'expert' refused to look at it after he'd read the codes. At this point I had a terrible clatter on the top end, most likely oil starvation, and a low oil pressure issue reared its ugly head. Another 'expert' told me the oil pump was the cause of this, which, after lots of research, I agreed with. So I put a genuine Audi Oil Pump on, which is when I discovered a blob of black silicone wedged in one of the return channels on top of the pump. The previous mechanic to work on my car used black, whereas I used a blue silicone. The top end clatter disappeared, but the oil pressure issue did not...

Anyway, where was I...? At this point a plethora of codes had been resolved, which I was elated about, but the hot start issue persisted. Oh yes, I had a 4,000 revs warning amongst all of the above too, but this was resolved by replacing the Throttle Body...! (LOL!!!) Another 'expert' told me it's the valve lifters; oh yes, I also forgot to mention, the garage I was previously having my car serviced at was using semi synthetic oil, which contributed to carbon balling of oil around my engine, hence the recommendation that my lifters may be blocked. So I learned all there was to know about oil changes, flushes, after market products, etc. After several flushes, and replacing old oil with fully synthetic, my engine is running far better than it was. From cold it now starts with no issues, it's only when starting from hot; it's almost impossible & pot luck. I also forgot to mention the battery issues I was having and the 'new' battery that failed at less than a year old during lockdown; I digress. I forgot to mention (yet again); I had that low oil pressure warning, but it was only at idle, and then only when I turned the cabin heater or headlights on. So, very long story short, the only errors I now have, the 3 I listed above, they're all related to the VVT. So, I spent more months researching, lots of people had lots of ideas, but no-one really knew. Naptowntuner on YouTube had a fair idea (I like his vids). Then a month or so ago I discovered a chap in Canada, on YouTube, describing my engine fault, as if he was looking at my engine...!!! I watched his incredible video, that he'd made only a month earlier, and I learned more about the oil function of my engine in that hour & half than I had in the previous 2 years, oil pressure, where's, when's, etc! So, I contacted him and he agreed that my issue was in fact the intake camshaft. To clarify, he buys, repairs and sells only Audi's with this very same engine fault because he can get them cheap, as previous owners have just given up, he fixes them and then sells them at a decent profit. He even took the VVT element of an intake camshaft apart to show why it was failing to start and causing timing issues when hot; essentially it's metal wear & tear and fatigue, and possibly being assisted by parts of the blown mesh from inside my cambridge, from when the PCV Valve popped.

So, there you have it. I'm now having to save my pennies, many many pennies, while continuing to look for new work, so I can replace the intake camshaft. There's no way on earth I can afford Audi prices, so I've done more research and I've found a German OE manufacturer, with prices around half that of Audi, but still double that of the crappy Chinese copies on eBay. I'd like to shout out to my contact at Audi by the way because he's been a fantastic help throughout this process, sharing part numbers, getting me what genuine parts I can actually afford, even helping in their back car park sometimes, especially when I discovered a cracked Exhaust Solenoid connector! He and his colleagues loved my dog (RIP Zack! xXx). I've also just remembered other things I've done on this long road, but it now matters not, like Coil Packs, Spark Plugs, Air Filters, Oil Filters, Sump Plugs, Dip Sticks (that's just me!), Front Bumper Bolt Packs, Light Levellers, ABS Sensors, the list goes on...!

Wow! You've had a torrid time. I fully respect the way you've not given up on the car and that you've taken the proactive approach.

As far as the hot start issue goes, have you checked the air induction for leaks?
He steals your girl, you get over it. He steals your Audi, you hunt him down..
P

Thank you for recognising my efforts. I even made my own car ramps out of my kids childhood bunk beds... 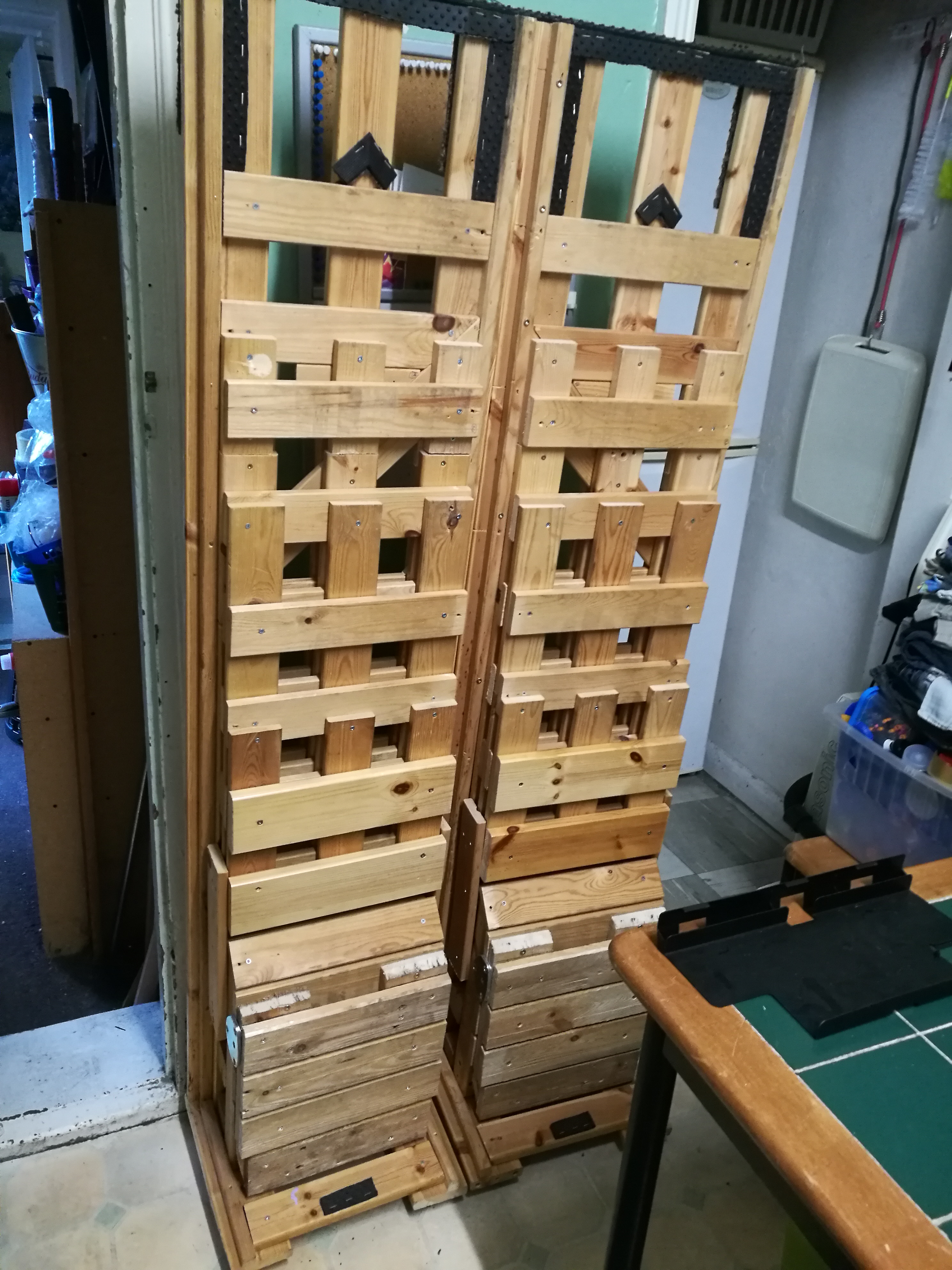 Garrett 69 said:
As far as the hot start issue goes, have you checked the air induction for leaks?
Click to expand...

Honestly? No. Good thought though. I have previously removed the whole air system, cleaned it and carefully refitted. I even bought some MAF Sensor solvent & cleaned it as per the instructions. When the engine doesn't start, it's an instant failure, which I had assumed would be electronic / VVT timing. I actually had the issue yesterday; I waited 30 minutes for the engine to cool down, and after a couple of presses of the key, it started. It was during this run that the turbo started displaying the described symptoms and after I arrived home I checked the codes and they were displayed as mentioned in my initial post.

Thanks for your help.

MAF sensor is another possibility of you've not changed that yet.
He steals your girl, you get over it. He steals your Audi, you hunt him down..
P

Garrett 69 said:
MAF sensor is another possibility of you've not changed that yet.
Click to expand...