I initially ran into problems with the car rolling backwards slightly in traffic and blamed these on the operation of the hill-hold assist option. However, on further investigation, I believe the start/stop system is to blame.

Unusually, compared to other cares I have owned. the s/s system will stop the engine before you come to the full stop (it seems to shut down as the car reduces speed to 4mph under breaking conditions).

I have noticed the engine cut out as I roll up to a give-way junction:

1) Approaching junction, foot on the brake
2) Speed drops below 4mph, the engine cuts out
3) The junction is clear, foot off the brake and onto the accelerator
4) Momentary delay and lack of power as the engine starts
5) Car pulls away

During phase 4 above, there is a risk of the car rolling backwards - which is why I initially attributed it to the HHA system.

The manual indicates that the system is operating normally, with the footnote clarifying that the mode of operation will vary between countries... 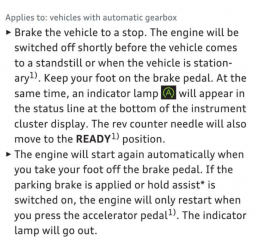 While the manual also includes this passage, I've not managed to master the pressures required. The only time I've encountered the scenario below is when I've braked very gently coming up to some lights and had to give a firmer jab of the brakes to get the engine to cut out. I've never managed to do the opposite and keep the engine running when intended!

And to clarify, I meant HA/Hold Assist above.

HA - Hold Assist - The hold assist helps the driver to move off forwards if the vehicle is stationary for any period or stopped frequently, for instance at traffic lights, on steep gradients or in stop-and-go traffic.

HHA - Hill Hold Assist - The hill hold assist function makes it easier to drive away on a slope. The system is activated when you press and hold the brake pedal for a few seconds. The vehicle must be on a slope and facing uphill. When you release the brake pedal the braking force will be maintained for a moment in order to hold the vehicle and make it easier for you to drive away.
Arrived at dealer: 2018 Audi A4 1.4 TFSI S-Line S-Tronic in Manhattan Grey with Rotor Grey Leather/Alcantara interior.
Technology Pack, Parking Assistance Pack (Advanced), High-beam assist, Privacy Glass, Flat-bottom steering wheel, Extended LED lighting, Folding door mirrors, and Hill-hold assist.

I have managed to master the pressure on the brake pedal but think it will be difficult to change the behaviour of start stop other than switching it completely off. Does it affect the ha if you turn start stop off by either the switch or by putting the car into sport mode?
M235I xDrive, Snapper Rocks, Pro, Tech and Drivers Assistant Packs, 19" 557M Wheels.

With S/S turned off I have no problems - it seems to be the early activation of S/S (while the car is still in motion) that is tripping me up...
Arrived at dealer: 2018 Audi A4 1.4 TFSI S-Line S-Tronic in Manhattan Grey with Rotor Grey Leather/Alcantara interior.
Technology Pack, Parking Assistance Pack (Advanced), High-beam assist, Privacy Glass, Flat-bottom steering wheel, Extended LED lighting, Folding door mirrors, and Hill-hold assist.

I experience the exact same thing in the exact detail you’ve expressed. It’s the most onnoying feature of the car. If you feather your brake peddle the engine won’t stop I’ve found. Ie don’t press hard on the brake peddle. From the previous owner on mine I saw the note of a battery change. This system must be very sore on the ignition system.

No it isn't hard on the ignition at all as the systems are specificially designed different from a engine that doesn't have start stop...
M235I xDrive, Snapper Rocks, Pro, Tech and Drivers Assistant Packs, 19" 557M Wheels.
You must log in or register to reply here.