RIP off rent a car

I hired a car for 6 days through Rentalcars.com. They’ve been great in the past; good prices and they provide ‘full cover’.

I go to collect the car at the centre and I must admit Im already in holiday mode and far too relaxed for my own good. They go through the breakdown putting a line through everything I thought my voucher covered. 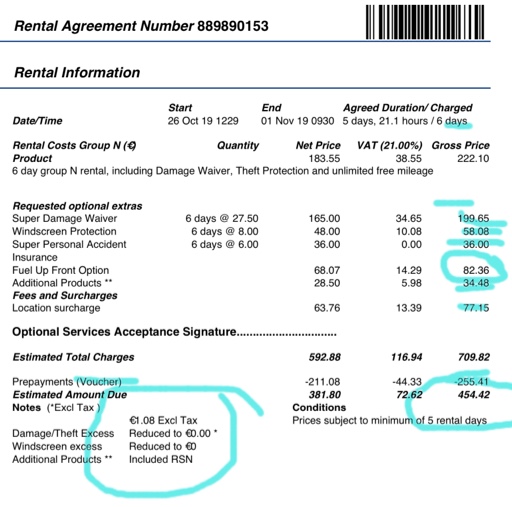 I normally challenge the fuel cost but decided to go with it this time.

Anyhow after going though all the details I handed over to the wife who used our Monzo card to pay for what I thought was the £300 deposit and the fuel costs.

As we got in the car to go my phone went kerching (anyone with a Monzo card will understand) and we proceeded to our apartment half an hour away.

I look at our holiday funds in the apartment and suddenly realise it’s a lot lighter then I expected. That’s when I realised they had charged us for all the extras they had actually crossed out.

I’m a complete numpty I know, but after looking through all the paperwork it gets worse.

Reading through the Rentalcars agreement I’m already covered for a lot of the extras charged.

So I’ve now for a solid argument to go back with.

Bearing in mind we’ve not used the car at all since arriving at the apartment, we drive to Puerto Benus On returning to the car at the end of day I then see some f’wit has driven into the front of it.

I’ve also read the reviews on Google and it would appear this particular Budget is out to screw you whichever way it can.

Could it be a set up re the " Other " car causing damage, could be the rental car co damaging there own car to fleece you.
NULL

Just spoke to the guy at the hire car company. He knew the score. He didn’t give two f’s what my arguments were, he had a reason for everything.

I'd take the car banger racing and really let them know they screwed over the wrong customer,

After sending quite a frank e-mail to Budget, they refunded me the full amount. Randomly two weeks later they sent me a response sort of indicating that it is what it is and they agreed with the garage.

RIPPED OFF A4 specialist

RIPPED OFF A4 specialist