Just took my car to AMD is Essex for a remap but my audi q5 3.0tdi wouldn't go above 3.5k rpm the guy gave me figures at 3.5k which was 252bhp 478ft torque he said they have had this a few times before with audi's but it shouldn't affect the tune which should be about 300bhp

Anyone have any idea why it wouldn t rev past 3.5k

It's there rolling road that's at fault. The rollers need to be matched in speed quite closely or the car gets confused and backs right off. Had similar issues when I took my car to MRC for a run on their rolling road. In the end we had to disconnect the ABS module completely, the dash was lit up like a christmas tree but it then pulled fine on the dyno.
Some rollers actually have a physical connection between them so they run at the same speed but most use electronics to control the load on the front and rear rollers to match the speed. If this isn't set up correctly the roller speeds deviate as the power is shuffled front and rear by the Torsen AWD system.This tends to happen more with larger diesels because of the torque they create.
If you take it back and disconnect the ABS completely you will find it runs OK, surprised they don't know this.
I would be surprised if it gets near 300bhp if it's only making 252 bhp at 3500 rpm.
This was my dyno run at MRC. Car had DPF removed and a bigger intercooler but apart from that was standard 240Bhp 3.0 TDI.
Mine made 250 bhp around 2500 RPM. At 3500 RPM it was over 300bhp.
Could be that the engine is being limited by the speed differential in the rollers. If it's not that far to go back I would ask them to try running it again but with the ABS module disconnected.
I used the MRC rollers because at the time Rick at Unicorn only had a 2WD setup . Now he has a 4WD setup, and it runs fine without having to disconnect anything. 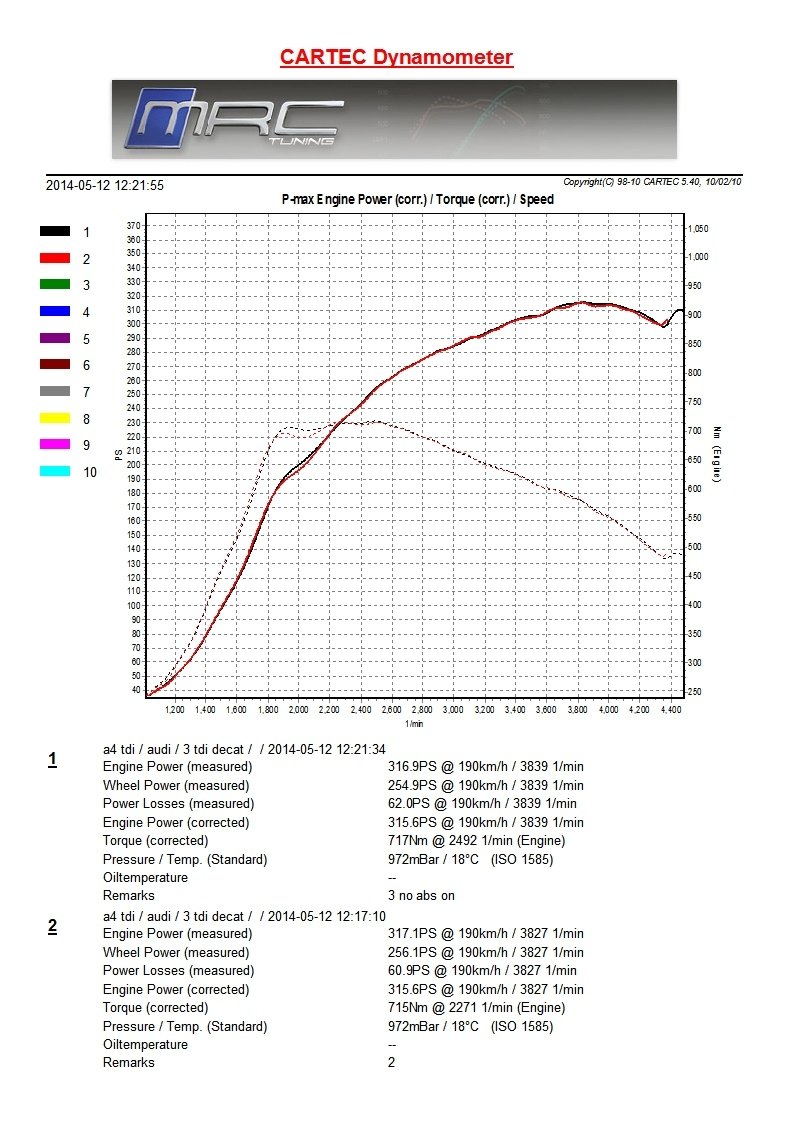 Thanks for the great info AMD did disconnect the ABS sensor completely and it still wouldn't pull past 3.5k and it did light up like a Xmas tree I had to reset 22 error codes when I plugged in my scanner which to be fair I thought they would have reset them all. There wasn't any lights on the dash but I scanned it anyway.

Is AMD the best for remaps in SE Eng

S
Failed MOT on an AMD remaped S3 due to emissions

Is AMD the best for remaps in SE Eng

S
Failed MOT on an AMD remaped S3 due to emissions