Nice advert for the Q2 showing options and interior individuality.

Sorry no Q2 prefix yet.
A3 Sport S-Tronic

Scottyg said:
Sorry no Q2 prefix yet.
Click to expand...

Another looking more at the back "Fin" blade colour choices and alloy designs along with trims.

A3 Sport S-Tronic
A

Q2 just appeared on the configurator. Not impressed with some of the prices. :-(
NULL

I'll go have a wee play.

Prices are what I was expecting for a Audi Q car, beginning to appear on some broker's sites as well, without any discount yet of course.
Specs are up on the main Audi site as well as a price list here https://www.audi.co.uk/content/dam/...ndSpecGuides/modelpricelists/Q2-Pricelist.pdf
Last edited: Aug 5, 2016
M235I xDrive, Snapper Rocks, Pro, Tech and Drivers Assistant Packs, 19" 557M Wheels.

Hopefully they'll bring the Nardo and BSP to the Q2 by the time I'm looking. One like the Q2 in the top clip would be prefect.
A3 Sport S-Tronic

We originally looked at the Q3 but felt the interior more so the heating controls looked very dated. I have been in the Q2 at a special event in London and whilst it is very nice, now the pricing/spec has been released I have decided to jump ship and ordered the new Tiguan 2.0TDI 150 DSG SEL which is fully loaded (Pano Roof, Virtual Cockpit, ACC etc) and costs 5k less than an identical Q2 especially as you now have to pay for climate control and a colour DIS which were standard on my current A3.
Arrived - 8V A3 1.4tfsi COD S-Line Sportback S-Tronic, Daytona Grey, Audi Sound System, Interior Light Pack, Light & Rain Sensor, Alu Roof Rails, Privacy Glass, Non Smokers Pack, Deletion of model & technology.

Sorry but can I clarify the virtual cockpit as I thought hat is an Audi only option...
M235I xDrive, Snapper Rocks, Pro, Tech and Drivers Assistant Packs, 19" 557M Wheels.

It's available across the entire VW range. Here's the Tiguan ....... 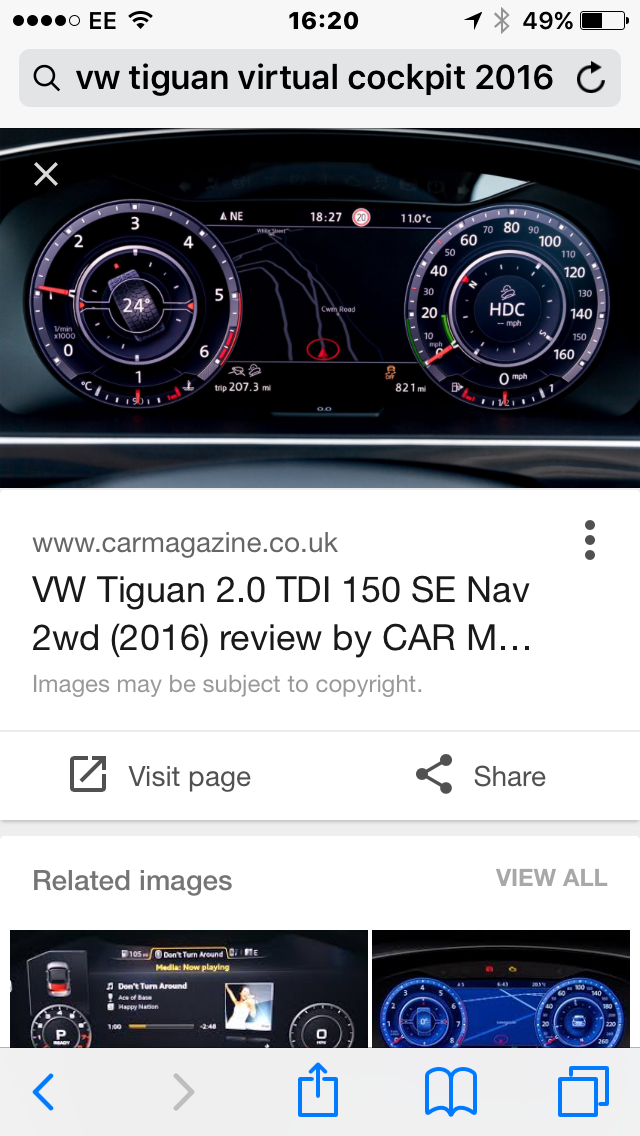