Oh no, I crashed - where do I stand

Sadly after 15 years of quite clear 'no fault' accidents (mostly when parked!), I'm not so sure where I stand on the one this week.

I was the grey car in the picture in the 3 time scenes. 3rd part is blue car. White cars are there to represent traffic. There was possibly up to 4 cars between us. Only showing 2 for brevity. White car facing the wrong direction there to show that a car could pass on the underside of me.

So, traffic was nose to tail queuing and standstill. I did the usual MSM noting the blue car that was also starting to pull out but far enough away not to be a problem. I started to pull out at the same time as the blue car but I did so much slower as I was nervous about any of the cars in front of me suddenly pulling out. The blue car pulled out much quicker and accelerated. I was aware of the blue car approaching whilst I was pulling into the other lane and so stopped, sounded my horn and didn't proceed any further. The blue car kept continuing and then cut ever so slight across my offside wing making contact. The blue car finally stopped some 5 cars in front. 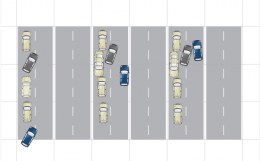 Damage to the blue car was a long scrap on the nearside between wheel arches.
My car has damage to the offside wing.

My insurance company are saying that because I was still not fully in the other lane, I am 100% at fault. I was far enough over that the traffic queue was able to easily undertake me whilst I was 'discussing' matters with 3rd party. So I really don't know what I could have done differently to avoid this and feel that the blue car had a duty to make sure the way ahead was clear.

Has anyone else between in an accident like this?
NULL

I would say the best you are going to get is a 50/50 but it could well be blamed on yourself. If you saw a car coming from behind and still pulled out and did not complete the lane change before he arrived then I would say it's your fault.
Either way you are likely to lose some of your NCB and end up paying an excess.
Karls 382bhp A4 3.0 TDI build thread
MK1 511bhp TT track day car Build thread

Have to agree with the above. If you change lanes you need to give way to traffic already in that lane, however fast or slow they are. Doubt it will be a 50/50 settlement in the insurance companies eyes.
Trackday Grandad enjoys his Westfield at every opportunity, woo hoo!
A3 2.0 TFSI Quattro Stronic.
Now added free bonuses--------A Bus pass, free prescriptions, winter fuel payment.
R

Thanks guys, I appreciate the response although maybe not the verdict I guess I'm just going to have to suffer the consequences on this one. My only remaining concern is that I'm not sure I would have done anything differently given the situation again. Maybe I need to consider some driving lessons :/

Incidentally I cleaned my car this morning and noticed that there is also damage to the offside front wheel, straight scrapes across it. I think that would backup my statement that my car was stopped but I guess academic if I'm still at fault because I was not completely in lane.

So this has been a bit of an eye opener. I've seen situations on motorways when cars try to move out to the overtaking lane and the cars in that lane have quickly closed the gap to prevent them and had thought they would be at fault if contact was made because they have a duty to ensure the road is clear and they were acting aggressively. I guess not.

Although I'm fully comp, my car is fairly high mileage (>200K) so claiming is likely to write it off. My excess is probably higher than it's value too! So not going down that route either way. I'm fully comp simply because it was cheaper than going 3rd party.
NULL

On hindsight, it would have been better not to involve the insurancecomp and you pay the other guys repair bill if it wasn’t too much. This all depends on the other guy and how amicable he is. I understand it’s difficult to make a quick decision at the time. The overall cost to you both would less in the long run, loss of NCB and inflated premiums in the future considered.
Trackday Grandad enjoys his Westfield at every opportunity, woo hoo!
A3 2.0 TFSI Quattro Stronic.
Now added free bonuses--------A Bus pass, free prescriptions, winter fuel payment.

You're probably right but it would have been a massive viewpoint shift having seen the 3rd party car (3pc) pull out at the same time as me 4 cars away and then 'overtake' and cut in on me - these observations (but alas *not* verifiable facts) and the 10 or so seconds I was cautiously pulling out for suggest to me it was their fault but realise the circumstances and evidence don't stack up in my favour.

I think my contract with the insurance company still require that I disclose this incident - regardless of how it is settled. In fact, as my car is still perfectly drivable I only rang the insurance company to report and discuss where the blame would lie. I didn't even mention claiming to them but they were extremely keen to discuss that with me as though I had rung specifically for that purpose.

I'm sure as the way my luck is going I'll be getting my first speeding ticket in the next few months which will bump my insurance up further :/
NULL

Lets face it, if you both started from zero MPH at the same time and the car behind was 4 cars back or 60ft/20yds and he accelerated straight in to you he obviously wasnt paying attention or driving to within the conditions.
There are a lot of questions though, like why were you both apparently in the wrong lane ? or was the second lane an over taking lane or a direction change lane ? had you not been a car but a child crossing the road at the same time as he pulled out 20 yds away what would the other driver have done ?

the bottom line is of course insurance companies are not really interested in who's fault it is, they will go with whichever is going to cost them the least and a scrape or knock is not worth the admin to fight and if you lose your no claims they collect more money next year as well.
IBIS WHITE S3 APR stage 2+ software/ APR cast downpipe and sport cat/ VWR cai system/ Wagner IC with silicon pipes/ DV+/ Loba high pressure fuel pump/ Eibach pro kit/HEL brake lines/ Mobil1 5/50
www.ducatipaddy.com​
You must log in or register to reply here.

S
where do i stand?

N
Problem arisen - where do i stand?

Excessive issues - where do you think I stand?

Apr 1, 2008
bacardi
B
A
Where do I stand with my warranty?Advice please

S
where do i stand?

N
Problem arisen - where do i stand?

Excessive issues - where do you think I stand?

Apr 1, 2008
bacardi
B
A
Where do I stand with my warranty?Advice please