Hi,
Please can someone with a non virtual cockpit car advise if their cruise control still has the 'switching off temporarily' function as described in the manual? It is the standard cruise and not the adaptive version.
I used to set the cruise control speed and push the lever halfway forward to temporarily switch off. The set speed would display as a smaller icon in the area where the ODO mileage is and the green cruise control light would remain lit on the right hand speedo dial. Then when you pulled back on the cruise lever it resumed the set speed.
Since taking the car for a service a couple of weeks ago, this 'switching off temporarily' function is missing. A half push on the stalk now turns off the green dash light and displays the ODO where the set speed reminder once was. When I pull back on the stalk, it does resume, but it is not so easy to remember what speed it will resume to since the set speed reminder is missing.
Anyone able to provide a photo or video of the set speed icon on temporary switch off will be doing me a massive favour and helping me prove to the dealer how it should work.
Many thanks

I have the same set-up but don't tend to use the speed limiter function, rather than cruise control.

So - have tested this out. I pull the lever towards me into the 'on' position and use the button on top of the level to toggle between the speed limiter and cruise control functions. When I select cruise control a message in the center appears, saying cruise control active' then after a few seconds disappears.

When I engage cruise by pulling gently towards me - the green cruise icon appears with the set speed, replacing the ODO display. If I temporarily deactivate the CC but pushing one notch away from myself, the ODO display reappears and there is no visible indication that the CC is active. Pulling towards me one notch and the CC re-engages.

However - if I am stationary or driving very slowly and pull the lever towards me I get this - I assume this is reminding me the system is active but car travelling too slowly for it to re-engage. This remains on for a few seconds before reverting to the ODO display. 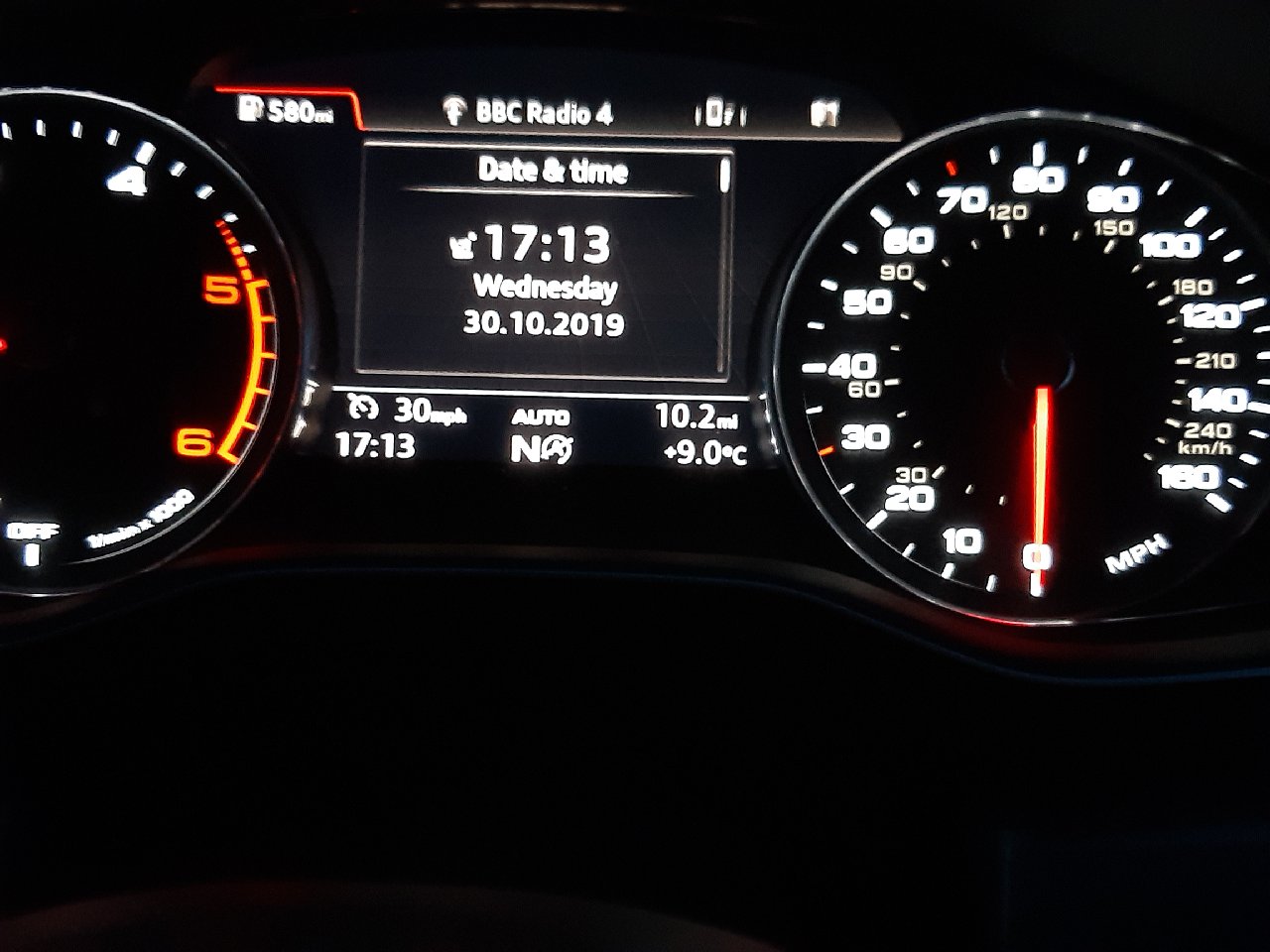 Nick, Thanks very much for testing it, snapping the photo and taking the time to reply. Much appreciated. It sounds like our setups are a little different. Your display looks different - I don't have the fuel range displayed in the top left. Maybe you have the tech pack? I should have explained that mine doesn't. Mines a 2.0t 252ps A4 Allroad. Also your cruise control stalk sounds different - to set mine you press the button on the end. Interesting that you don't get the reminder of your previously set speed though. Unless I am going mad I could have sworn that has been there for the last 35,000 miles up until the service. The green cruise light defiantly was there, as my wife always commented on it, asking what it was. It was on the whole time as I never had cruise turned off (stalk pushed all the way forward). Since the service, the green light is only there with cruise is set.
I thought the previously set speed was a safety feature so you can better anticipate what the car will do when you resume. Mine accelerates quite hard on resume in dynamic when the cruise was previously set to 70 and you are doing say 30-40mph, and I guess that could catch people out. Does anyone else get to see the previously set speed display?

It would appear the all road setup is slightly different.

@Nick_B sounds like you have a 2016/early 2017 Audi A4 with the monochromatic rectangular display?
G

Yes it is a 2017 plate and the DIS is monochrome. Probably a rarity as most got the Virtual Cockpit...
D

Greg T said:
Yes it is a 2017 plate and the DIS is monochrome. Probably a rarity as most got the Virtual Cockpit...
Click to expand...

Mine is 66 plate with mono display, and that doesn't (and has never) displayed the speed unless the CC is engaged. Once you tap it off (or press the brakes) you don't know it's ever been on. I kind of preferred it that way as I use it a lot and it drives me mad seeing lights on the dash to show something is "enabled" when it's not "active".
A4 2016 (66) 218 TDi Auto Quattro (S-Line).
G

Thanks for your replies guys. I've had a few visits to the dealer trying to get the cruise control back working how it has for the last 3 years. No luck on that unfortunately and we even tested a similar spec car and it worked as /dev/null described above. Mine was obviously some sort of freak of a car with a different cruise set-up from the factory. Since the recent service something has changed to put it back to a more standard set-up. From now on I'll have accept to not having the resume speed displayed and try and remember what I last stored it at. It's just annoying that same year A3's and even the A1 they loaned me have the ability to display the resume speed, as did our old passat and 2014 octavia!

I forgot about this one - I tested on my 19 plate, and mine works as the rest do, it doesn't show the speed one CC is disabled.
G

GenerationGav said:
I forgot about this one - I tested on my 19 plate, and mine works as the rest do, it doesn't show the speed one CC is disabled.
Click to expand...