As seen in Fast n Furious 5, Mr Walker in Rio driving this beauty, so old skool it has to be cool.

In my opinion one of the coolest cars EVER! Always had a love for these from a young teenager, shame I will never afford one

"The first Skyline GT-R was launched in Japan originally as a four door sedan in February 1969 (pictured here), followed shortly after by the coupe model (shown below)
Like its sedan counterpart, at the heart of the 1970 Skyline GT-R is Nissan's S20 2.0-liter straight-six DOHC 24-valve engine. It produces (or at least it did when it came out of the factory) a maximum output of 160PS at 7,000 rpm and a peak torque of 18.0 kgm or 130-lb/ft
at 5,600 rpm. Power is transferred to the rear wheels through a five-speed manual gearbox.

We don't have any official performance figures for the Coupe (maybe some of you Nissan fans can help us out here), but we did manage to find out that the 1969 Skyline GT-R Sedan with the same engine was capable of achieving a top speed of 200km/h or 125mph while it covered the first 400m from a standing start in 16.1 seconds."

In need of more POWWWEEERRRR!!

Beautiful car.
On my list for when I win the lottery..

I saw on in the flesh at a motor museum in japan and i loved it instantly.

I don't generally do Jap cars but yes that is very cool.
Life begins at 140mph
Sell my Audi??? Kiss my rings!
www.passionford.com
M

thats the first I have ever seen of this car lovin it:thumbsup:
2006 8P Audi A3 2.0 TFSI Quattro Sportback SE

Love it, love the whole range, one day when I don't need a car for business use I will own one!
NULL
S

Just in case your numbers have come up ...

Awesome cars. I drove one on the through Hakone and across the Izu Skyline when working in Japan. 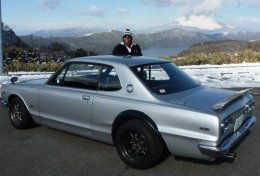 Well, I saw the advert for a company called Fun2Drive on one of my trips to Hakone. They have, on their rental books an R35, R32 VspecII and the Hakosuka.
I promised myself I would try the Hakosuka and with help from Nick, we arranged a rental.
You must have a Japanese license to drive the car. An IDP is not accepted.

As mentioned, and I will continue to mention this, I did not know what to expect from the car.
But when we arrived to collect, there was no worrying at all. The car is very impressive. Quite small when next to the R35 and even compared to the R32. They also have an NSX ...

I could not really talk about the state of tune of the car or what modifications it had due to the language barrier. There were three others there, all in different stages of repair and tune. I think more will be offered for rental in the not too distant future.

Exterior was good condition. You would not be upset with it. Very clean and as a workhorse though you could see it had been resprayed you would not be upset with it . The general conditions of panels etc was very good in my opinion, especially for a car this age.
The interior was in ok to good condition. The seats were original buckets, access to the rear was ... difficult as the seats did not recline or go forward anywhere near enough. When driving, they were very comfortable. Had racing pedals, nice to use. The seatbelts, originals, were a waste of time really, better off putting harnesses in. I was impressed that you could wind the rear windows down, like in the old Celica. Did not know you could do this.
The back seats are ok, just a basic bench.
If you bought the car, it would not be too hard to get interior/exterior pristine.

Driving.
Initial feeling is not too good. The car had no driver aids. No power steering and the wheel felt a bit woolly, ride was fantastic though, suspension very well sorted. The brakes were absolutely rubbish. You very quickly realise how much assistance modern cars give you. This is a car that will make you very tired if you try to explore it, and your limits.
After a rest, and getting back into the car, you feel like your body has dialled into it though. The roads through the Skyline are wonderful, lots of sweeping [and not so sweeping] bends lovely straights and opportunities to enjoy the car.
The steering suddenly feels so much better and at points you go from one bend to another and really feel at one with the vehicle. I spent so much time grinning like a fool or just outright laughing.
But the best thing about the car was the noise.
From 3500rpm it sounds really, really good. At 5500 upward it is intoxicating.
And then you find a tunnel ...

It really is a fantastic car to drive and I'm so happy to have had the chance.
The reaction of people to the car is brilliant. Especially seeing three non-Japanese fools enjoying it.
Everywhere we parked it got the right attention, camera's came out and lots of broken conversation.
Best part of the day was parking close to three tricked out 911's and people going to the Hakosuka to take pictures.