New to me S Line Tdi in Havanna Black

I know you've seen them all before but I thought I'd introduce my first A6. Its only a 2.0ltdi but I love it. Has lots of extra options compared to the others I had viewed at the time and I can honestly say I would buy another tomorrow, albeit with a higher output engine, I would love a bi turbo next.

Its got the plus version satnav and MMI with touch, Bluetooth high, tech pack, heated seats and optional 19" wheels. I also managed to get the dealer to agree to update the MMI to the latest version free (can you believe they were originally going to charge me £400 for it!). In any case, pics below, its difficult to show the havanna black paint as it look different depending on whether it catches the sun. But its got like a gold/bronze hue to it. 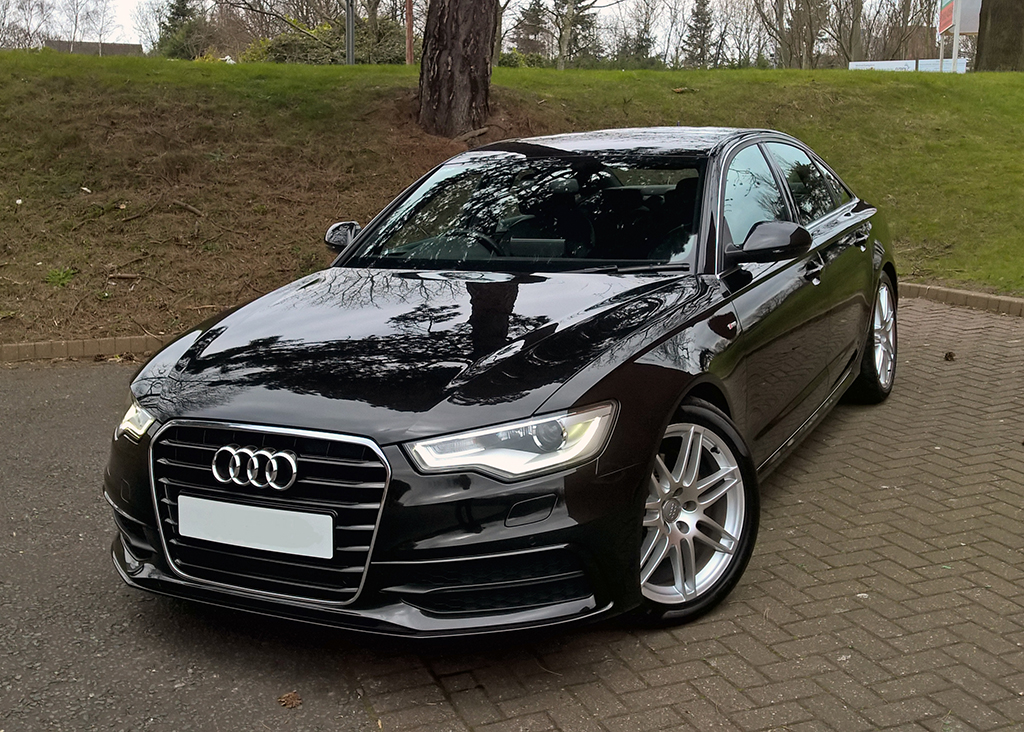 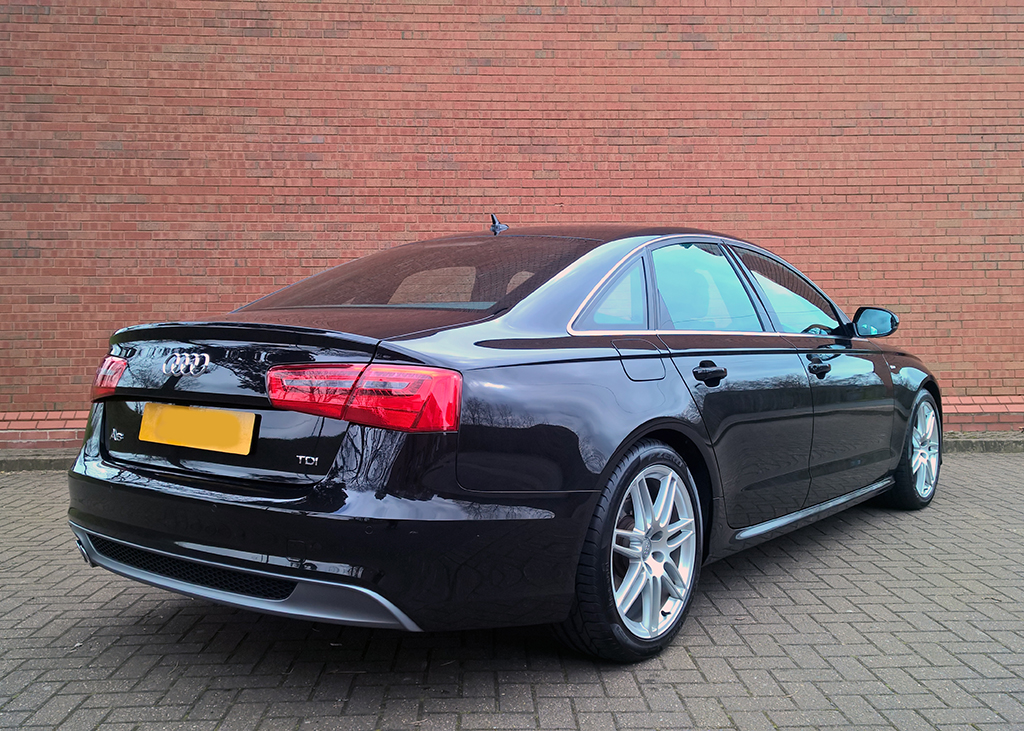 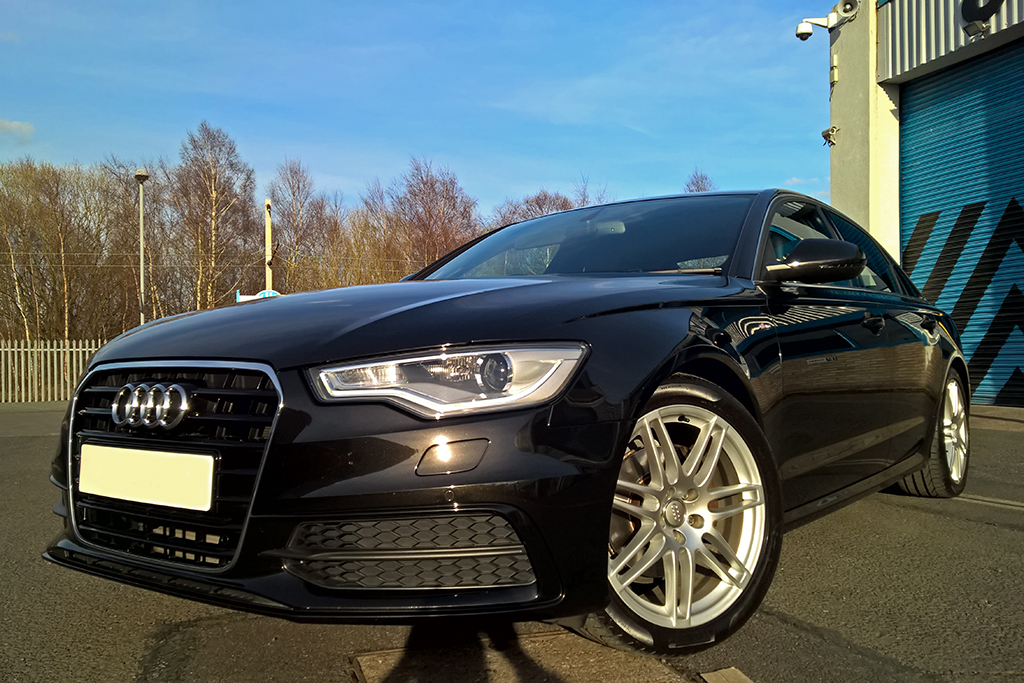 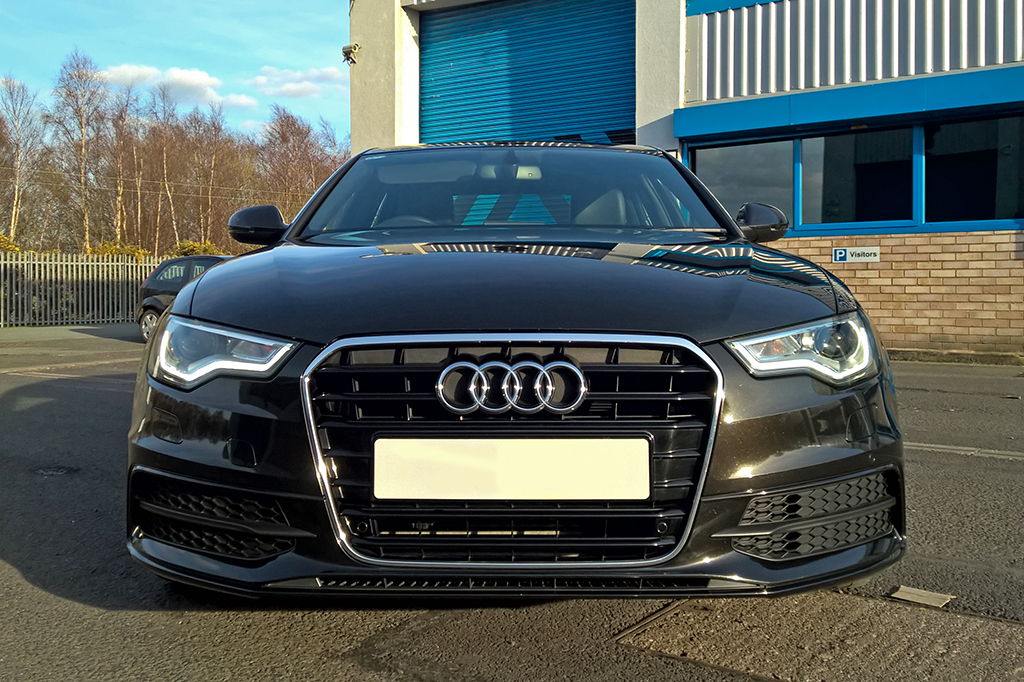 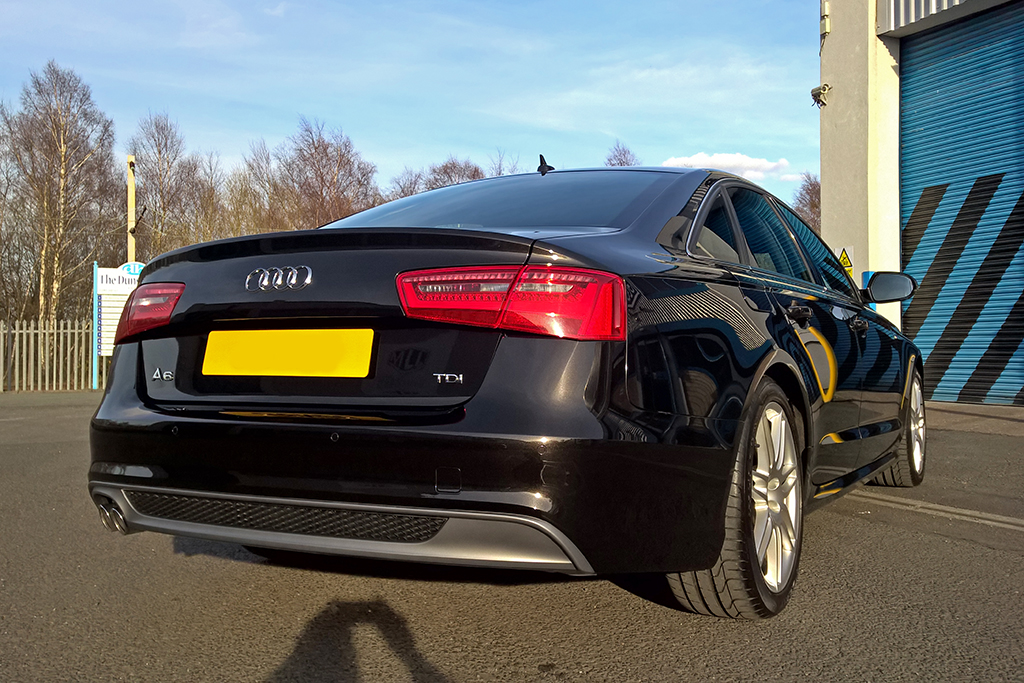 Mods: enabled some bits using vcds such as beep on disarm, drop mirror on reverse, dial sweep, interior footwell lighting etc. Other than that at some point I'm hoping on correcting the paintwork as its got a few swirl marks and painting the calipers. Might also de-badge it for a cleaner look on the rear. Also undecided yet as if I want to add a chrome boot strip or chrome fog grills like the ultra's.

Oh and also I'm thinking of getting the windows tinted, does anyone know what percentage the oem tint is and if the rear parcel shelf needs to come out to do so?

thanks both. Yes keeping it clean is a chore, but it pays its rewards more so compared to other colours I suppose. I have yet to give it a proper detail and get the hd wax on it. cant say I'm looking forward to it, as it probably take me all weekend lol
R

That colour Looks Really good on ur Car...

I got all my Windows Tinted, Including Front Drive/Passenger side, The Parcel Shelf was left in to do the Rear Window ... Makes a Big difference to the Appearance .

Rabie2412 said:
That colour Looks Really good on ur Car...

I got all my Windows Tinted, Including Front Drive/Passenger side, The Parcel Shelf was left in to do the Rear Window ... Makes a Big difference to the Appearance .

thanks for the info, that looks sweet! tints defo next on my todo list!
A

Got my nephew to paint the brake calliper's for me in a metallic red colour. Its not a in your face gloss red, but a bit more subtle. Also asked him to paint the discoloured hub and plate behind the discs in black which I think looks much better. Should have got him to clean the arches whilst the wheels were off but hey ho next time! lol 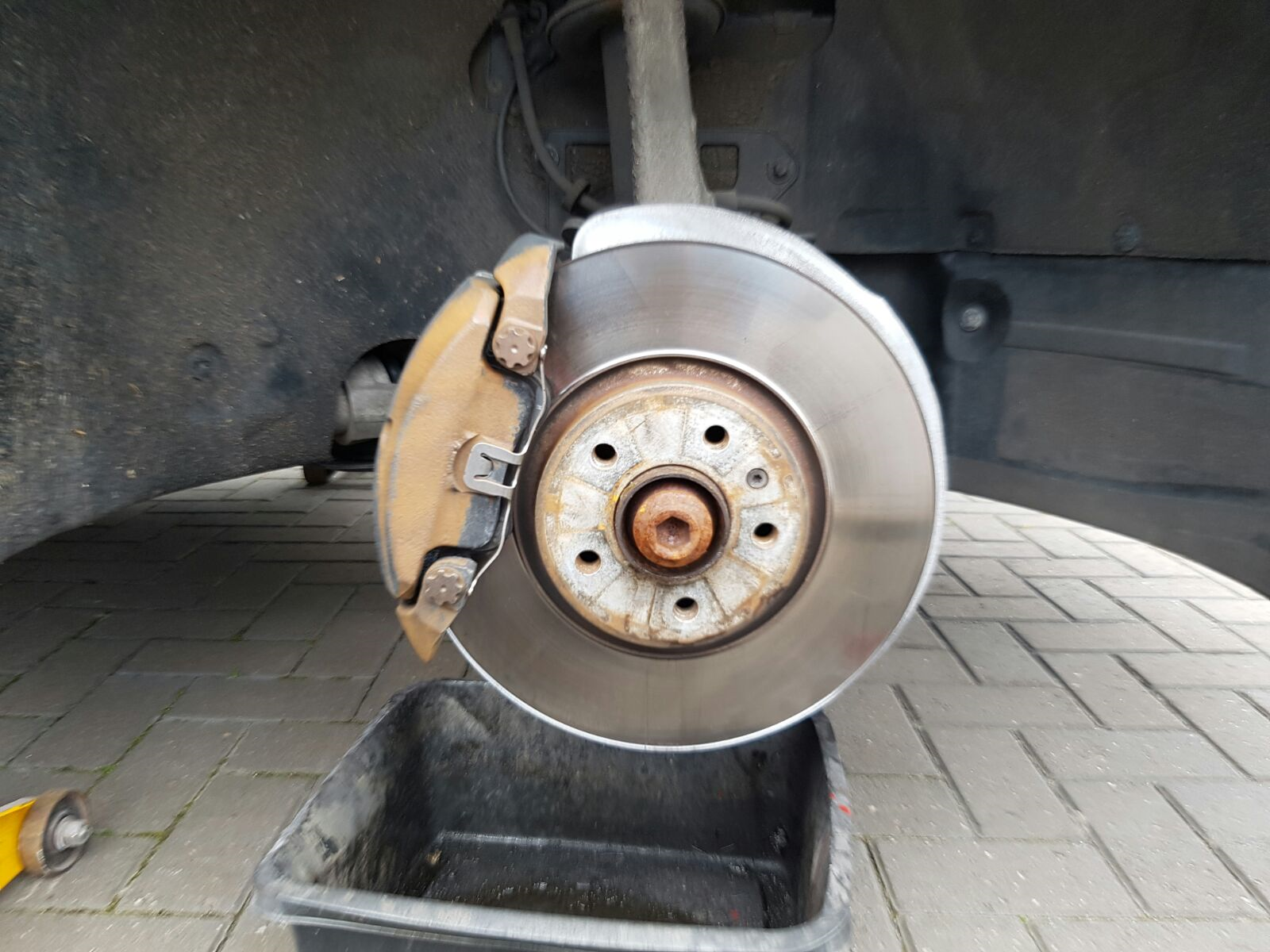 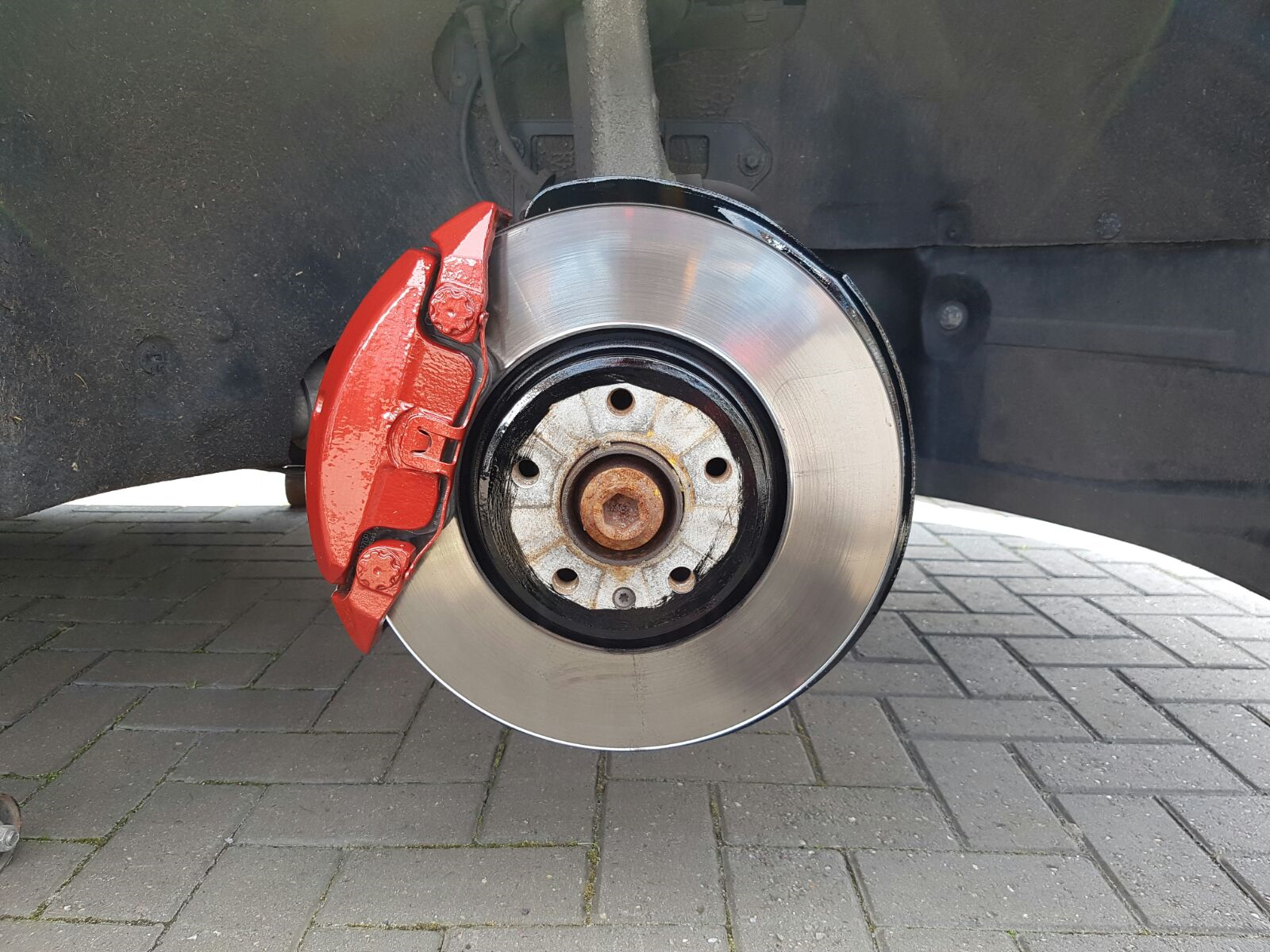 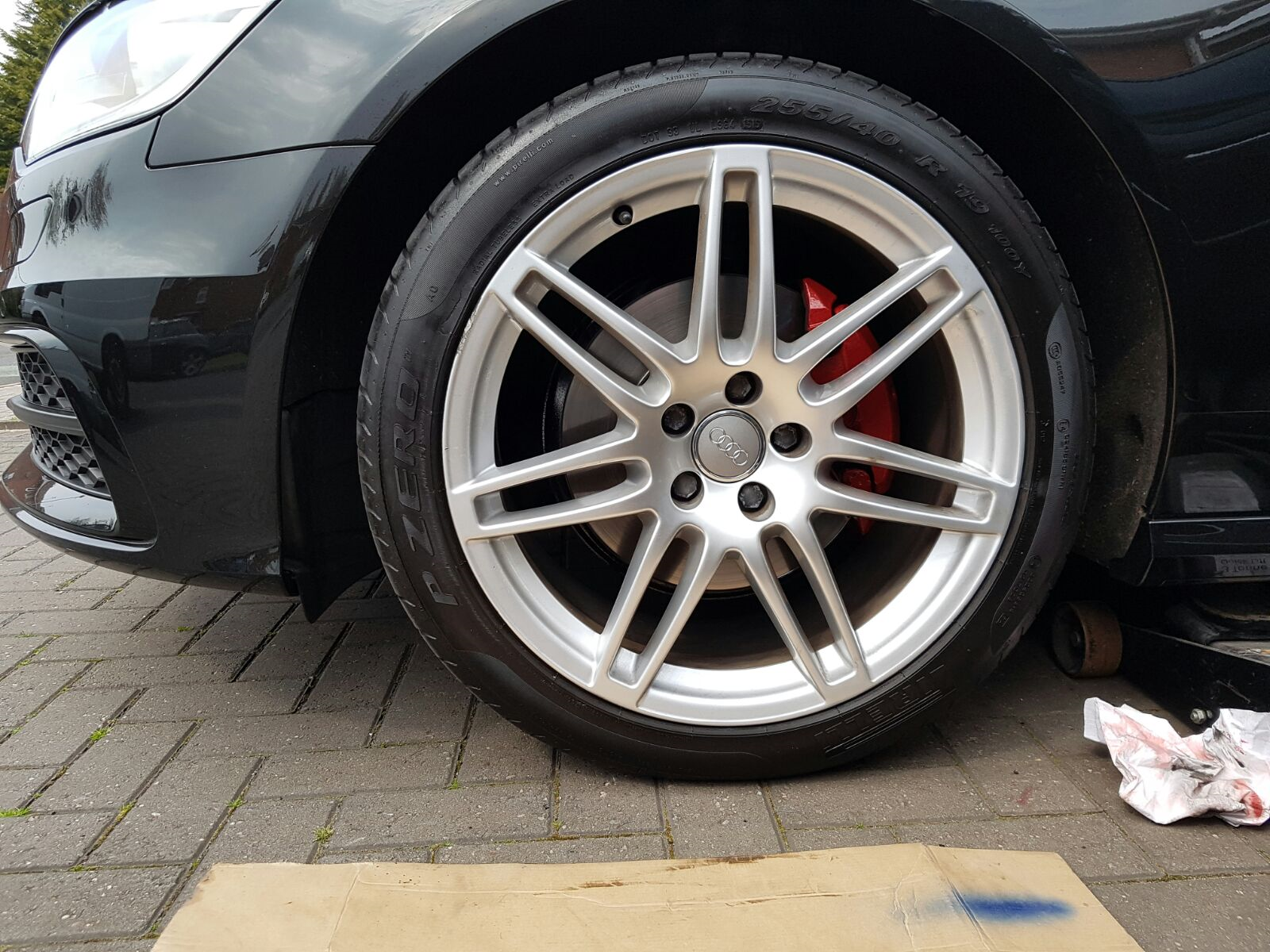 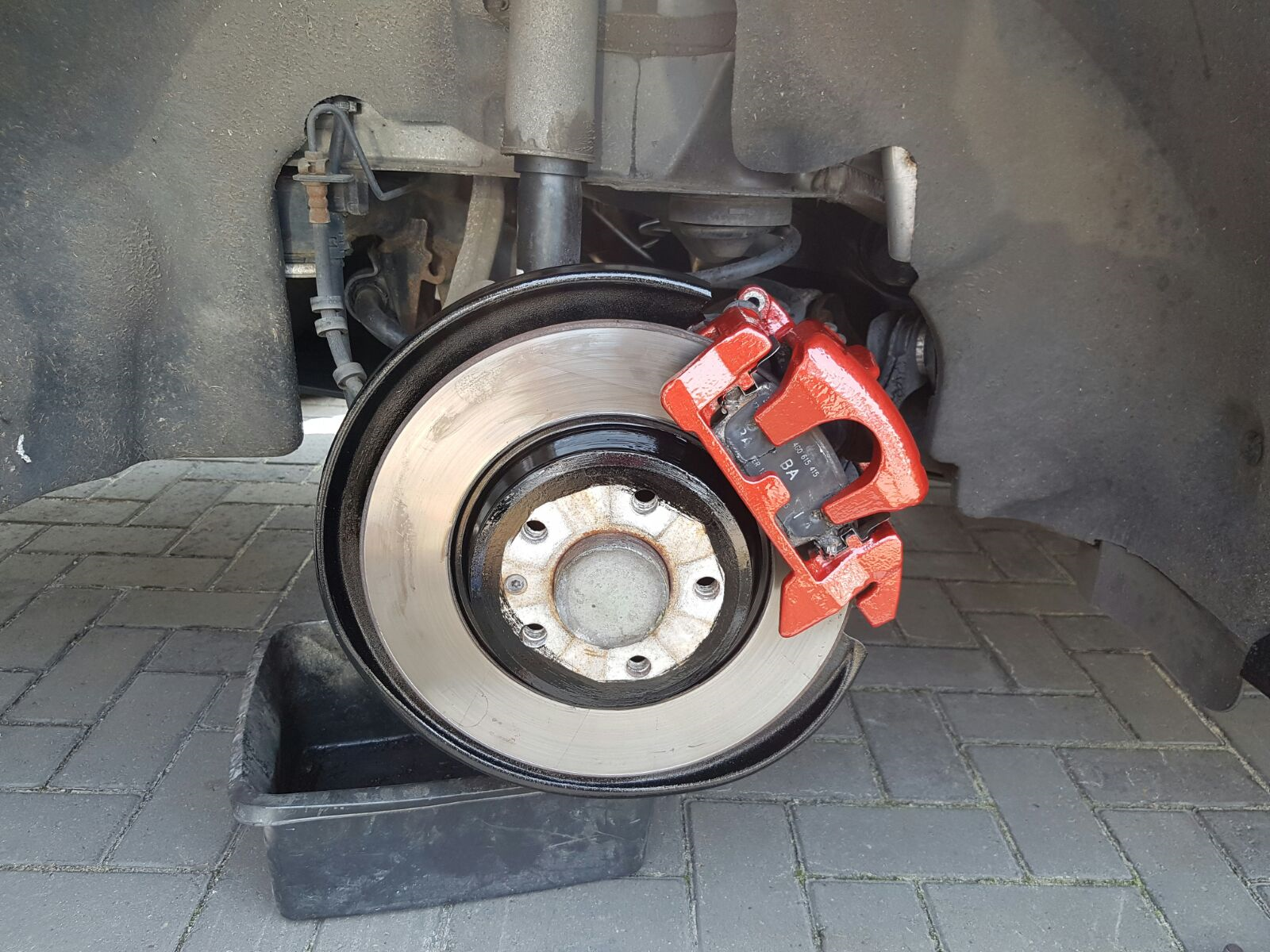 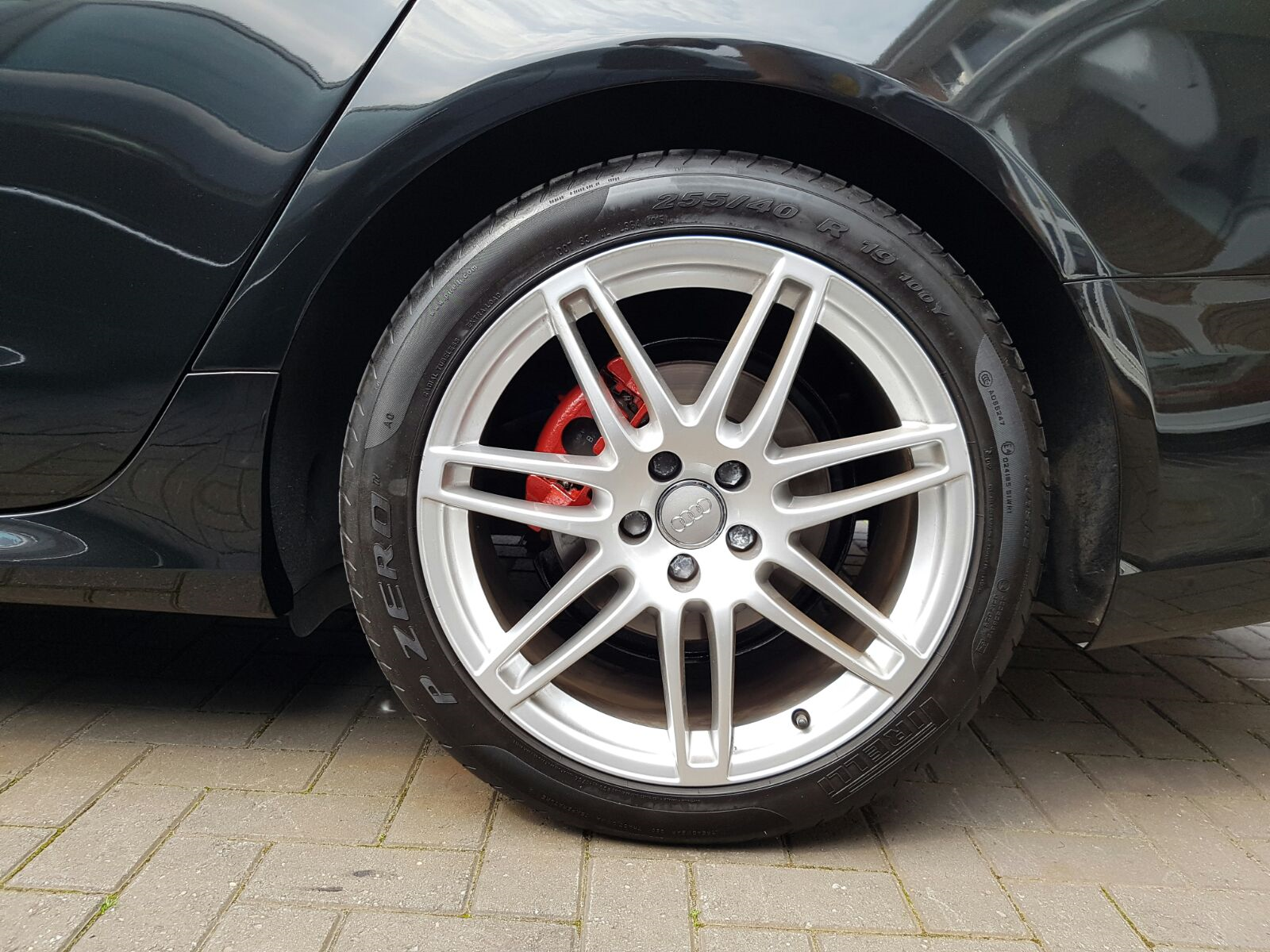 Not much of an update, just a couple of small mods. Finally got round to getting the windows tinted. Only went for a light smoke (35%) as we wanted a subtle transition from the front windows rather than a harsh limo black look.

Also replaced the wheel nut covers which were looking a bit tired. However, rather than grey plastic ones I went for some metallic red ones to match the calipers. Again quite subtle I think and not in your face red. 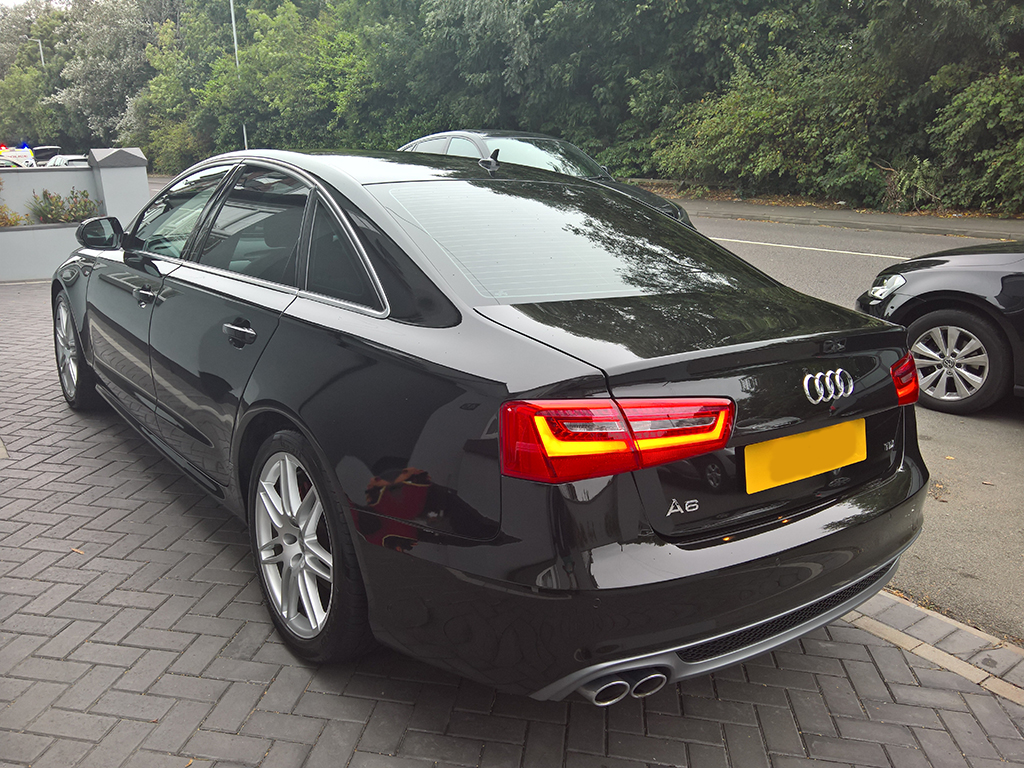 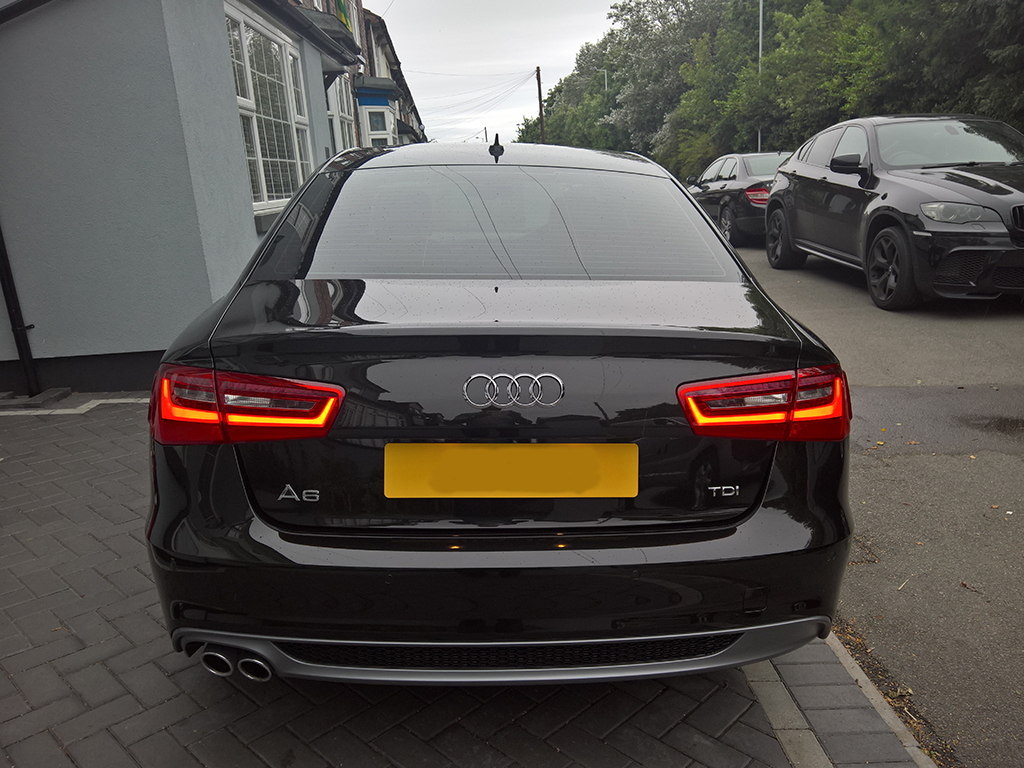 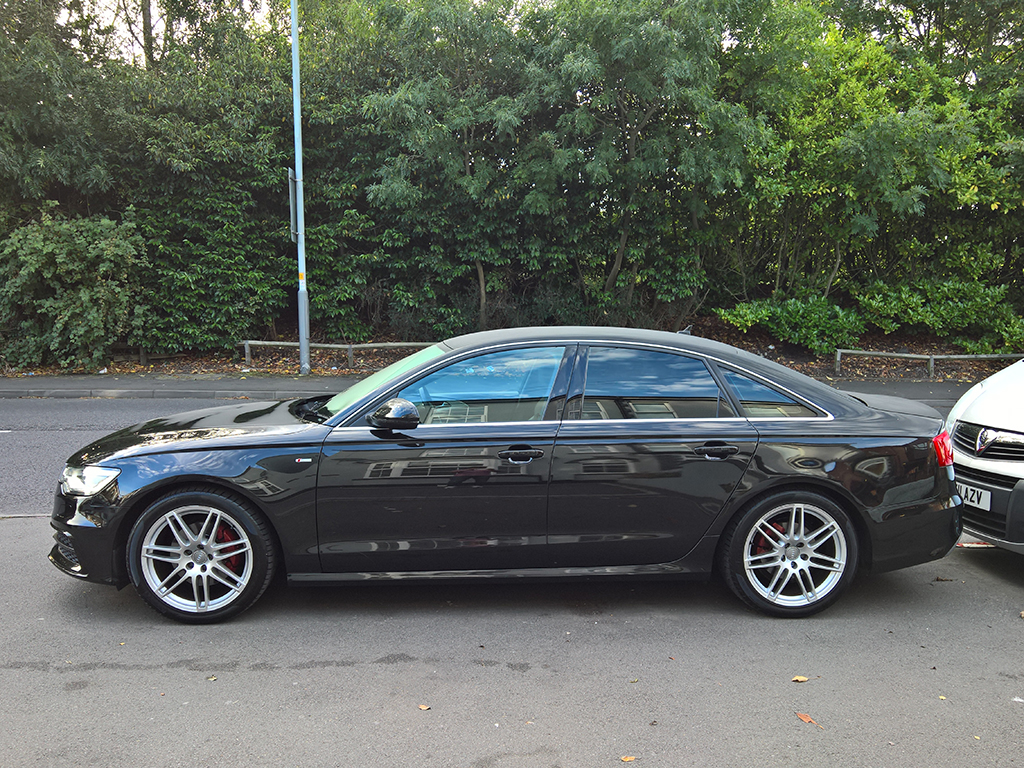 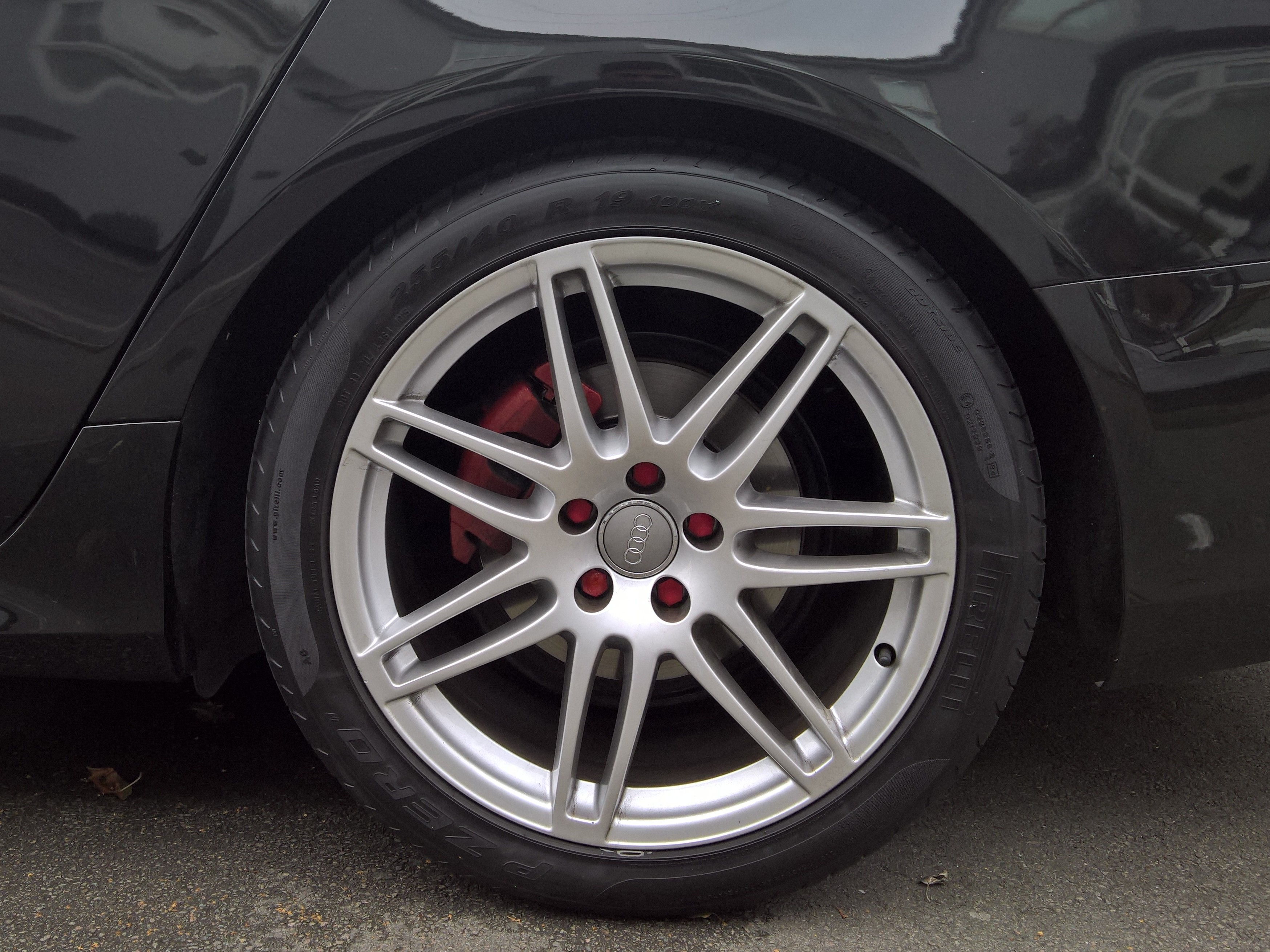 Oh and the car went in to the dealership for the Major Service, MOT, brake fluid and cambelt change, as well as the emissions fix. Thankfully, I only had to pay for the MOT, as the rest was covered via the service pack or goodwill from the dealership (see previous posts). But I am also pleased that the emissions fix has not negatively affected the engine output.

As a bonus, due to now having a very good rapport with the sales team, they very kindly loaned me an A7 3.0l Quattro Black Edition as a courtesy car for a couple of days. Upon return of my car (collection and drop off) they also gave me a free valeting kit which was a nice surprise. So needless to say I am well happy with the customer service received. 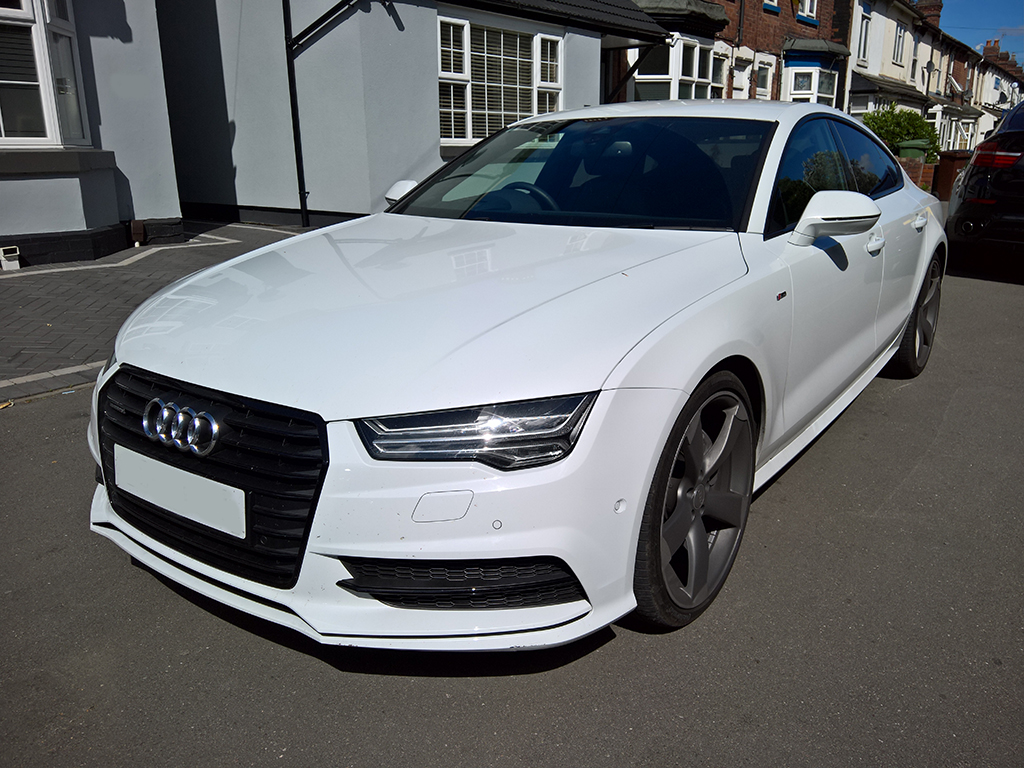 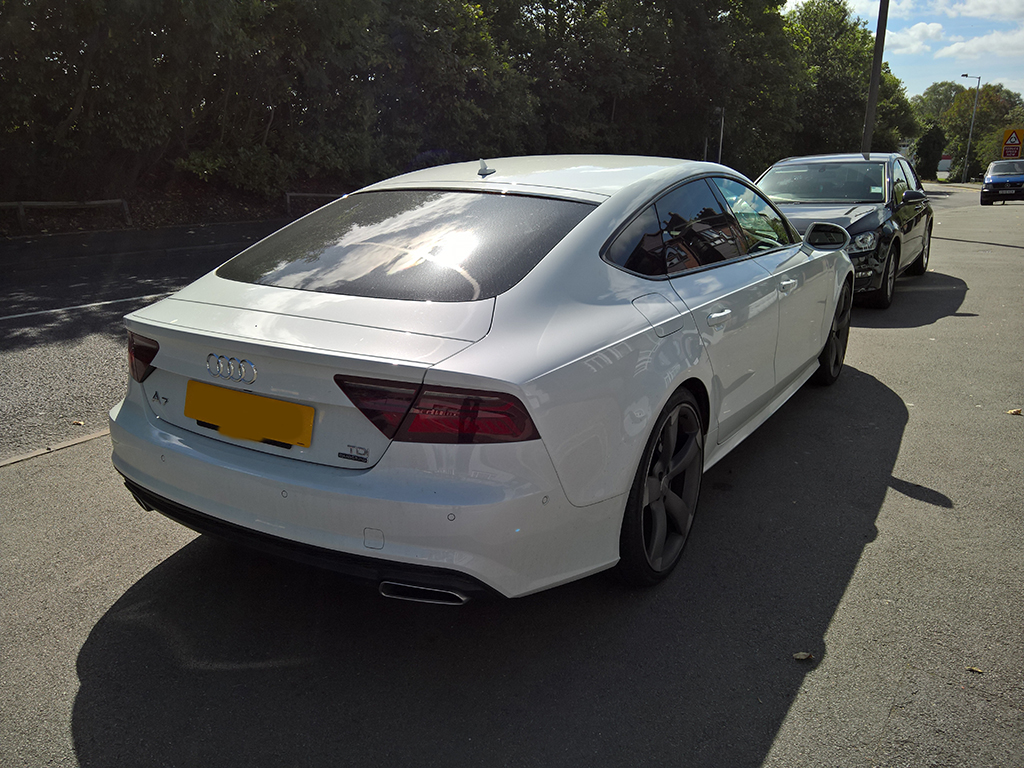 Very nice A6 you have there. Which dealer was it?
NULL
A

Audimad said:
Very nice A6 you have there. Which dealer was it?
Click to expand...

my wheels are due for a refurb, but probably wait until after the winter now. However, what are peoples thoughts on a reflective black chrome finish? I do like hyper silver and I'm not a fan of black on black, so thought a black chrome might be a good compromise? 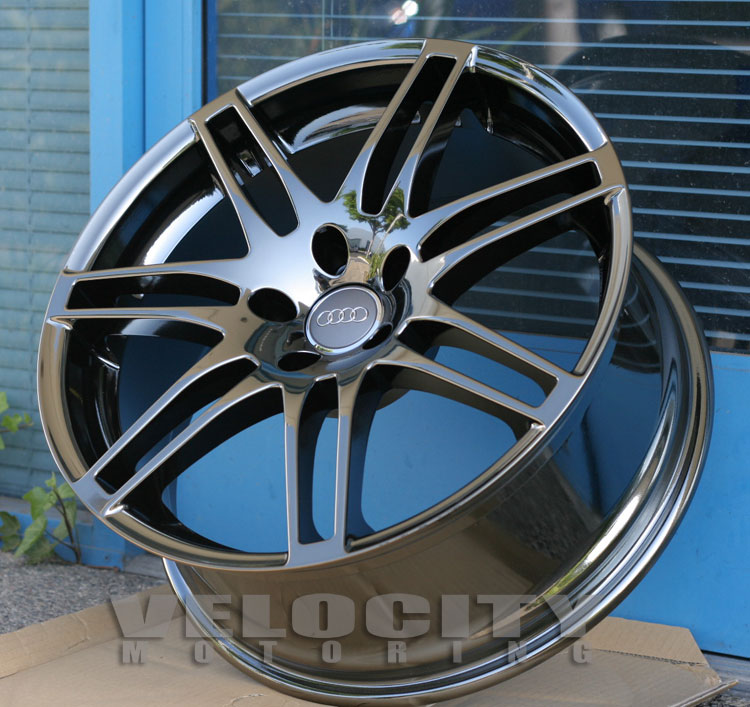 amowolves said:
my wheels are due for a refurb, but probably wait until after the winter now. However, what are peoples thoughts on a reflective black chrome finish? I do like hyper silver and I'm not a fan of black on black, so thought a black chrome might be a good compromise?

That would look amazing on a black car!

jojo said:
That would look amazing on a black car!

I would stick a coat of Alloy protection on it though, something like Gtechniq C5 sealant, or the finish will be ruined with the salts in winter!
Click to expand...

Yeh not going to do them until after the winter anyway, as my mrs is likely to kerb them a bit more yet! lol

Done a quick photoshop. Not got the lighting quite right but it gives a good idea of the look. I will end up blacking out the chrome trim around the windows also I think. 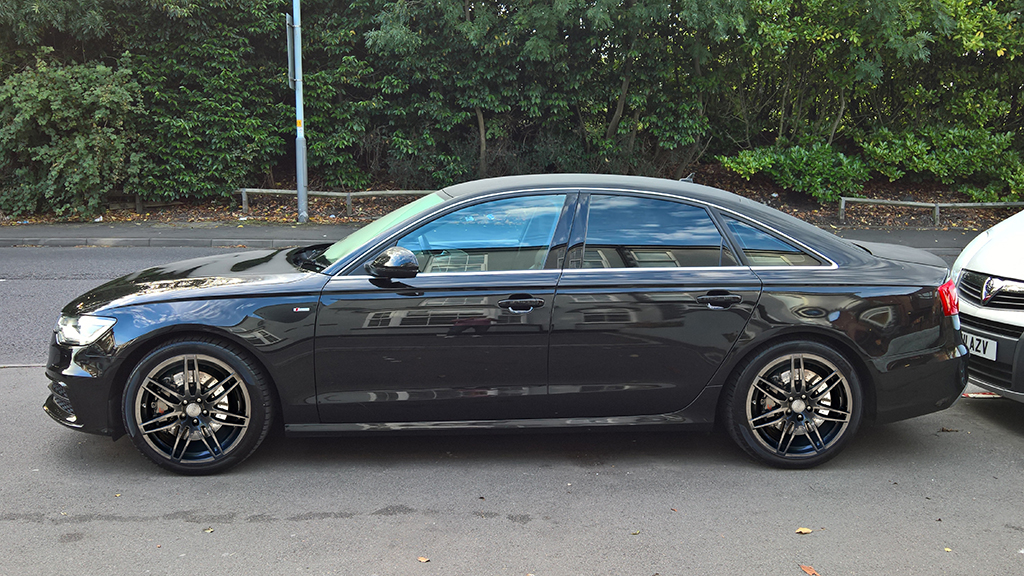 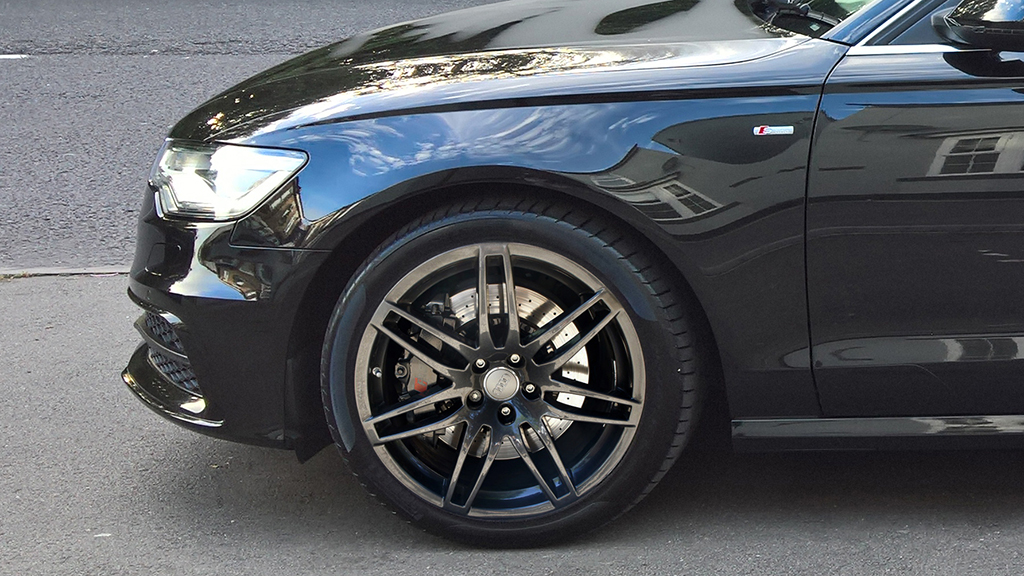 You've got to have a laugh! ​
You must log in or register to reply here.

My new to me Bi-tdi pic

My new to me Bi-tdi pic