My B7 xenon retrofit experience.

So I have just completed this retrofit and I can honestly say it was a very easy Mod to do. I Purchased the headlamps as a pair from an undamaged S4 complete with the bulbs, Ballasts and packs etc for £395 inc postage. I used the usual Kufatec wiring loom which worked out about £60 with the postage.

The instructions from Kufatec are not only inadequate but wrong when it comes to the coding of the central electrics module which state to change the second number from the left to a "2" but as per VCDS coding suggestion window that pops up it's actually the second from the right! They also don't give ANY suggestion to routing the cables into the car to the central electrics unit!

So I didn't take enough photos of the conversion but ill post up what I did take and it might help someone in the UK market as I could only find guides and suggestions etc from the American market which is helpful for us in regards to bumper removal and such like but the wiring routing that runs to the central electrics ECU under the steering wheel is completely different being RHD. 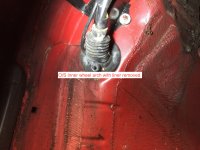 Here is a pic of the o/s inner wheel arch liner removed and the little rubber nipple is what I trimmed off to send the little loom into the car. I ran the Kufatec loom across the top of the fan cowling to the N/S headlamp first and worked my way back from that point if that makes sense, this way I have found the loom is a 100% perfect OEM look and fit. The loom routes nicely behind the o/s wing cavity from the O/S headlamp and runs clipped into the loom clips along this loom in the pic to the rubber grommet. 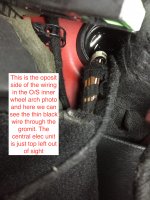 As this picture suggests this is the other side of the grommet and wiring in the last picture it pops out down near the bonnet lever/pull. The Central electrics unit is just up on the top right area of the picture. 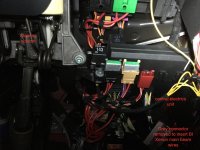 Here we can see the electrics unit that the 2 wires need to be connected to, These wires release/power the "Shutters" inside the lamps that give the main beam from the stalk. you need to take the grey 32 pin connector out from the module and then take the connector out of it's housing which is easier than it sounds, Just slide off the purple locking device on the side, cut the wee cable tie off and it slides out, simples....... 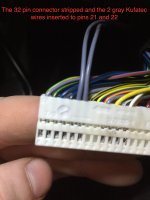 And here is said connector removed from the locking housing. See the 2 grey wires now inserted into slots 21 and 22 (not pin 17 is far left) there is no real of wires falling out here! The will only come out with a de-pinning kit so make sure you insert them into the right pins! They make a very satisfying "click" if in the right way round and locked in. Re build the connector as you took it apart with a new cable tie around ALL the wiring. 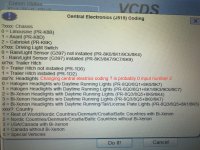 Here is the VCDS coding adjustment part, select address 09 central electrics unit and press 'CODING' then the second from last number will probably be a 0 or a 1, As the picture suggests change that number to a 2 if you want the DRL lights on or 3 if you want them off. 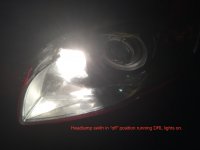 Here is the N/S lamp fitted and coded up and working with the DRL lights on when the headlight switch is "OFF" The DRL feature can be switched on or off via VCDS very easily.


So all in all it's an easy mod if your half handy at the DIY etc. I'd recommend you replace all the bulbs (Except the xenons bulbs i suppose) while you have the lights off the car as it will make life easier than changing them later on when fitted! (there tight in there) I have the colour DIS display in the centre of my dash pod and I'm not getting any failure messages of any sort (I read cars with this colour display will show self levelling faults with this retrofit if it's not fitted with the xenons) and the bulb failure warning still works perfectly too which surprised me.

I hope this helps someone and I wanted to give some info back to help others as I researched this big time over the last month or so and read lots of good advice from various places and forums. Opinions and questions welcome

great write up chap, what about headlamp wash , i was under the impression that xenons have to be used with headlamp wash.
factory fitment xenons come with the headlamp wash, or does your car allready have them.
nice work indeed.
Enhanced Brilliant Black Avant quattro 2.0tfsi Special Edition 270bhp
On a Mission for some extra performance from the old bus.

Thanks matey. I have a bumper with the washers and I'm looking at getting the Kufatec kit to install the suckers as we speak. Im going to replace the grill with an RS4 version at the same time I think. So they're not stricktly legit At the min. but hey.

sounds like a plan.
My avant came factory fitted with xenon plus headlamps, DRL's and adaptive lighting and i'm very pleased with the way it works for me, one word of caution though, when you start retro fitting the headlamp washer setup be very carefull with the pipe work fittings etc , they tend to become brittle and dont like be moved around too much, found this out myself a few weeks ago, luckily i managed to sort it out but when they start leaking they can be a right sod to stop, just a heads up really chap when you come to start whipping the bumper etc off and doing the retro fit.
Enhanced Brilliant Black Avant quattro 2.0tfsi Special Edition 270bhp
On a Mission for some extra performance from the old bus.

Mark 3.0 TDI said:
Thanks matey. I have a bumper with the washers and I'm looking at getting the Kufatec kit to install the suckers as we speak. Im going to replace the grill with an RS4 version at the same time I think. So they're not stricktly legit At the min. but hey.
Click to expand...

Your washers only have to work... If they are there.
You won't fail an MOT because of bi-zenons fitted, but if you have the washer parts fitted and not working, then you might.

Alex jb said:
Your washers only have to work... If they are there.
You won't fail an MOT because of bi-zenons fitted, but if you have the washer parts fitted and not working, then you might.
Click to expand...


This is right, " If washers are there, they have to work"
Also worth upgrading to Morimoto 6k. bulbs, if you don't already have them.
Trackday Grandad enjoys his Westfield at every opportunity, woo hoo!
A3 2.0 TFSI Quattro Stronic.
Now added free bonuses--------A Bus pass, free prescriptions, winter fuel payment.
D

Have you seen these retrofits: http://www.light-up.osram.info/en/ - seems to be around £600 mark on amazon.
NULL

DrEvil said:
Have you seen these retrofits: http://www.light-up.osram.info/en/ - seems to be around £600 mark on amazon.
Click to expand...

Yea I have seen these before, I don't like the "I'm trying to make my car look a newer model" that those type of lights give.

this is a great write up ive just done a trail fit on mine the d/s one stays lit but the p/s one cxome on for around 30 seconds then go out and if i put main beam on the drl work. is this due to them needing to be coded,?

Hi. Do you guys know if I can try some normal halogen headlights on a car that has manufacturers xenon headlights fitted? Cheers
P

Thinking aloud, I'm pretty sure that nowadays, you must have the auto adjustment fitted?

My old Lotus Carlton passed many MOT's with Xenon HID retrofit because the MOT tester dude was happy with the dipped pattern.'
I sold it a couple of years ago and Im sure the law was changed to 'discourage' the fitting of aftermarket kits.

I do stand to be corrected though.
P

Robertb7 said:
Hi. Do you guys know if I can try some normal halogen headlights on a car that has manufacturers xenon headlights fitted? Cheers
Click to expand...

I'm pretty sure the bulb fitment would be the same (my last A4 had factory Xenon), but you'd probably have to remove or disable the ballasts and probably make adjustments to the wiring - you might even have to recode them.

Great writeup, exactly as needed. Should be a sticky

Audi A4 B7 retrofit Bi-xenon question