Just found someone selling my old bus on facebook.
What is the approved method of tackling this. 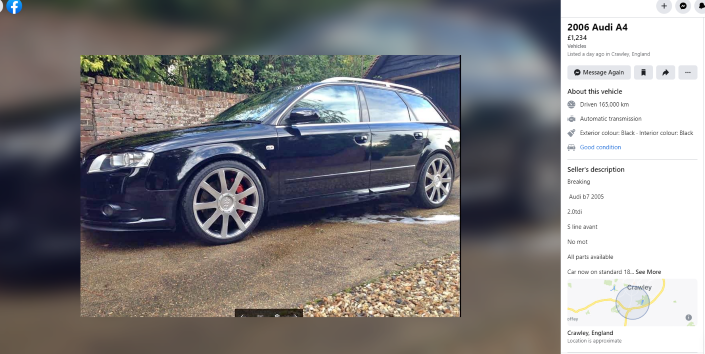 Enhanced Brilliant Black Avant quattro 2.0tfsi Special Edition 270bhp
On a Mission for some extra performance from the old bus.

I'm Just Rob. said:
Just found someone selling my old bus on facebook.
What is the approved method of tackling this.
Click to expand...

Report the advert via Facebook
Report to the old bill

I'm Just Rob. said:
Just found someone selling my old bus on facebook.
What is the approved method of tackling this.

Are they selling or breaking ? Photo may just have been used for advertising purposes

Sent from my SM-G973F using Tapatalk

The advert has disappeared a very swiftly, the advert appeared to be using my car as the image as the car spec was vastly different, even so , it's not his place to use an image this way as it is misleading to start with and could also lead to other things.
Enhanced Brilliant Black Avant quattro 2.0tfsi Special Edition 270bhp
On a Mission for some extra performance from the old bus.

My car images with visible reg was used as advert photo on eBay for honeycomb grille. I've reported it to eBay but stipidly contacted the seller and told him off. By the time eBay took action, pictures were gone.
Now, two other sellers are using my car pictures to sell some bulbs. I have contacted them under cover of being interested in bulbss but no reply so far.
Funny enough, all pictures were taken from ASN.

I would contact Facebook and report the seller/person anyway. Surely they have trace of it in the system. You have also screenshots and would report it to Police.
Could also pretend to be interested in the vehicle, either it's being sold as a whole motor or by parts and try to get out as much info as possible.
PCPlod probably would not do much but it would be in the system.

Worst come to worst, get seller contact number and post it all over the net for free blow jobs

I reported his listing but not sure what effect it will have, I also asked him if the car was still for sale, he said yes , then i asked him why he was selling my car and using the images for selling when he didn't have the rights to do such.
He just didn't respond and deleted everything , not that it matters as i have his name and a copy of the listing.

So if you are reading this " Alex Gibbo " what's your game then.
Enhanced Brilliant Black Avant quattro 2.0tfsi Special Edition 270bhp
On a Mission for some extra performance from the old bus.

B
Advice on selling my car

Found my Car on here from previous owner

Someone uses a photo of my car on Ebay