How to: Remove instrument cluster for the B7

The top part of the LCD fades when it is warm outside so I wanted to see how the LCD is connected. Iâve seen a write-up for a Cab and a B6 but it was slightly misleading.

You need a set of Torx screwdrivers, flathead screwdriver and a small set of flatheads normally used for fiddling with electronic goods.

This is relatively straightforward however there is one issue. When you remove the needles you may have joy getting them reset at the right position, youâll notice this on some of my photos as I did this a second time for the photos and realised my clocks were wrong. Thanks to jdp1962 for some photos to correct this. Also worth noting you probably should disconnect the battery first and the usual disclaimers apply i.e. if you knack your own up then it isnât anything to do with me.

Itâs best to remove the cover underneath the driver-side dash as you can use your fingers to move the cluster out.

Remove the side piece carefully with a flat base screwdriver.

There are three 10mm bolts to remove, one here and one either side of the dash trim underneath. The VCDS port is near the door so make sure you pull it out before moving the dash piece otherwise you might wrench the port out.

Next drop the steering wheel down as far as it will go. There is a central piece of plastic between the buttons on the cluster. This pulls forward, just grip it with your hands. This will expose two torx head screws that hold the cluster in place.

Itâs best with a slightly magnetic torx screwdriver so you donât drop the screws. Take them out and keep them safe.

The cluster can be a bit stiff to remove so get your fingers behind it from underneath the dash and push out. There are two cables, one either side. Unfortunately one of them has very little slack.

The one on the other side is more difficult due to its lack of slack. To do the same you might find it easier stood outside the car. Once the purple catch is free you should be able to take the cluster away. 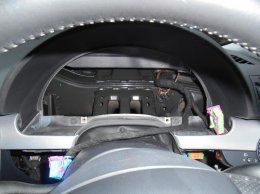 On the back of the cluster there are four torx screws (2 at the top and 2 at the bottom) to remove and then four tabs to unclip. You might have to peel back the stickers as they tend to be placed over the join. 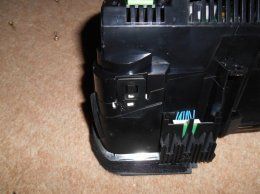 Next you need a small flathead to remove four plugs with blue wires. Take your time as you donât want to break any of these. Just put a flathead at one end and lever up slightly, so the same at the other end and then pull gently. Do this for the other 3. 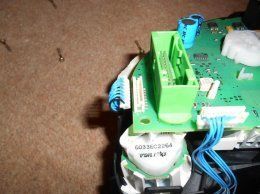 To take the needles off you need to turn them anti-clockwise while pulling them up. The Cab write-up I saw said to just pull the needles off but you'll break your cluster. Remove them and the black backing.

All the LCD screens are held in with metal cages which clip at the back of the cluster. To remove any of the cages just unclip them from behind and they will pull off. Be careful with the main LCD. 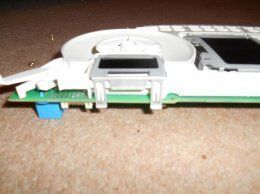 The ribbon cable slots into a laptop motherboard style connector. Just get a small flathead and lever the grey tab either side up slowly. The ribbon cable will come free. Voila. LCD free. I've cleaned the ribbon cable and connector just to see if it makes a difference but if not I know I can swap the screen from another cluster.

To get my needles to be correct I plugged the cluster without the back or front piece and turned the car on. It seems to do some initial calibration thing so took the needles off and put back on at the correct position. Then just put the cluster back together and put in the car.
Last edited: May 12, 2014
Nathan

White Audi S3 (8V)
You must log in or register to reply here.

how to remove the mirror caps

How to remove the interior trim

how to remove the mirror caps

How to remove the interior trim