I got the oil and plugs from ecs, but before setting out to do the oil change I did an extensive search and still can't confirm 100% which one is the drain plug. Because ecs sold me the identical plugs(drain and fill part N90281802) -

But when I went under the car to see what it's like, I took this picture-the plugs I was sent look like the ones to drain the differential, which I think is the drain to the right of the sway bar-the one I circled on the left of the pic seems to be the same 8mm Hex drain on a VW Vortex DIY, for MKVII R, which I assume is the same for 2015 S3 but part number is N91082701

I can't find a pic of the Audi S3 gen V haldex to be absolutely sure if the 8mm Hex is indeed the drain, and that ecs made a mistake with listing they S3 drain plug. I went to the dealer to ask a technician but it's saturday and they left at 3:30 so I'll probably have to go there Monday to get confirmation from a service tech after I show them this picture-

Pic of my 2015 S3 with drain plugs-as far as I know, the drain on the right is for the differential, the one on the left, the Haldex drain(?) If so, I was sent the wrong one, because the ones listed on ecs might be mistakenly listed. I was sent the second plug which is just like the fill plug N90281802, not the long 8mm Hex on the left side of the pic-

Thnx for any input 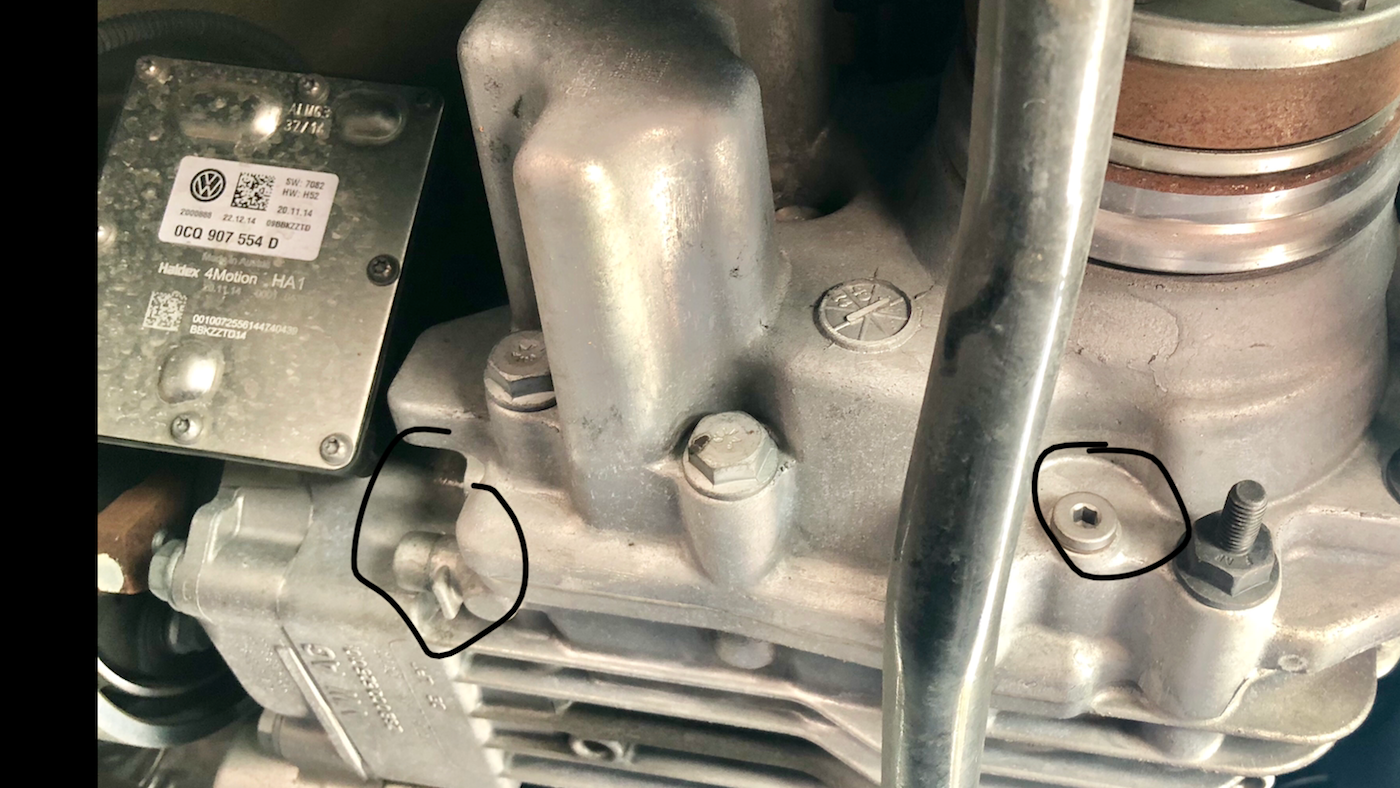 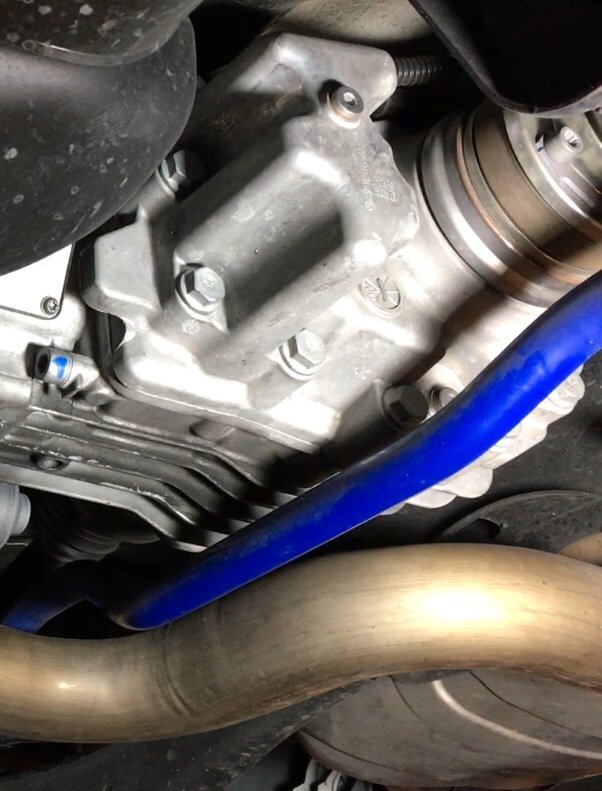 On vehicles equipped with a Haldex clutch, the drain and sealing

screws of both systems get interchanged due to the integrated

housing. This results in avoidable mistakes in maintenance

and servicing, which can result in the Haldex clutch or 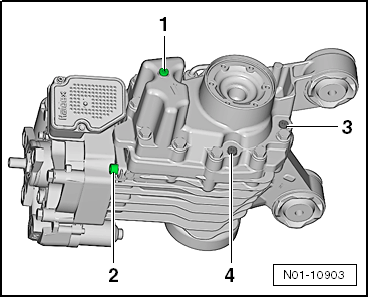 Which again makes me think ecs sent me the wrong drain, which they list as the same as the fill plug-

Yeah, I saw that post and it's pretty much the conclusion I've come to-and the problem is, it seems ecs is selling the drain plug kit with the wrong drain plug

U should let em know. Also, are u replacing it with an oem Haldex oil or other brand?

I got the oem oil-it's made in Sweden btw
I'll contact ecstasy and point it out. Aside from the S3, the A3 Quattro is also listed with using the same 2 plugs for drain and fill, which is apparently wrong. According to the VW service manual, drain is part N91082701. I can't find the A3/S3 Haled pics, but they're all Gen V Haldex. The only difference I see is in the Audi version(my first picture)the Haldex controller which even has the VW sticker on it looks slightly different than the service illustration one-

The drain plug is listed here, which I believe is the correct one-but listed for ML5 generation Golf
https://vwpartsinternational.com/sh...er-oem-new-vw-parts-haldex-service-n91082701/

All Haldex drain plug searches otherwise lead to the wrong drain plug(and shows the differential drain plug, which is the same one as the Haldex Fill Plug)

This is the only other pic I was able to find-and I learned how to write drain plug in German, lol 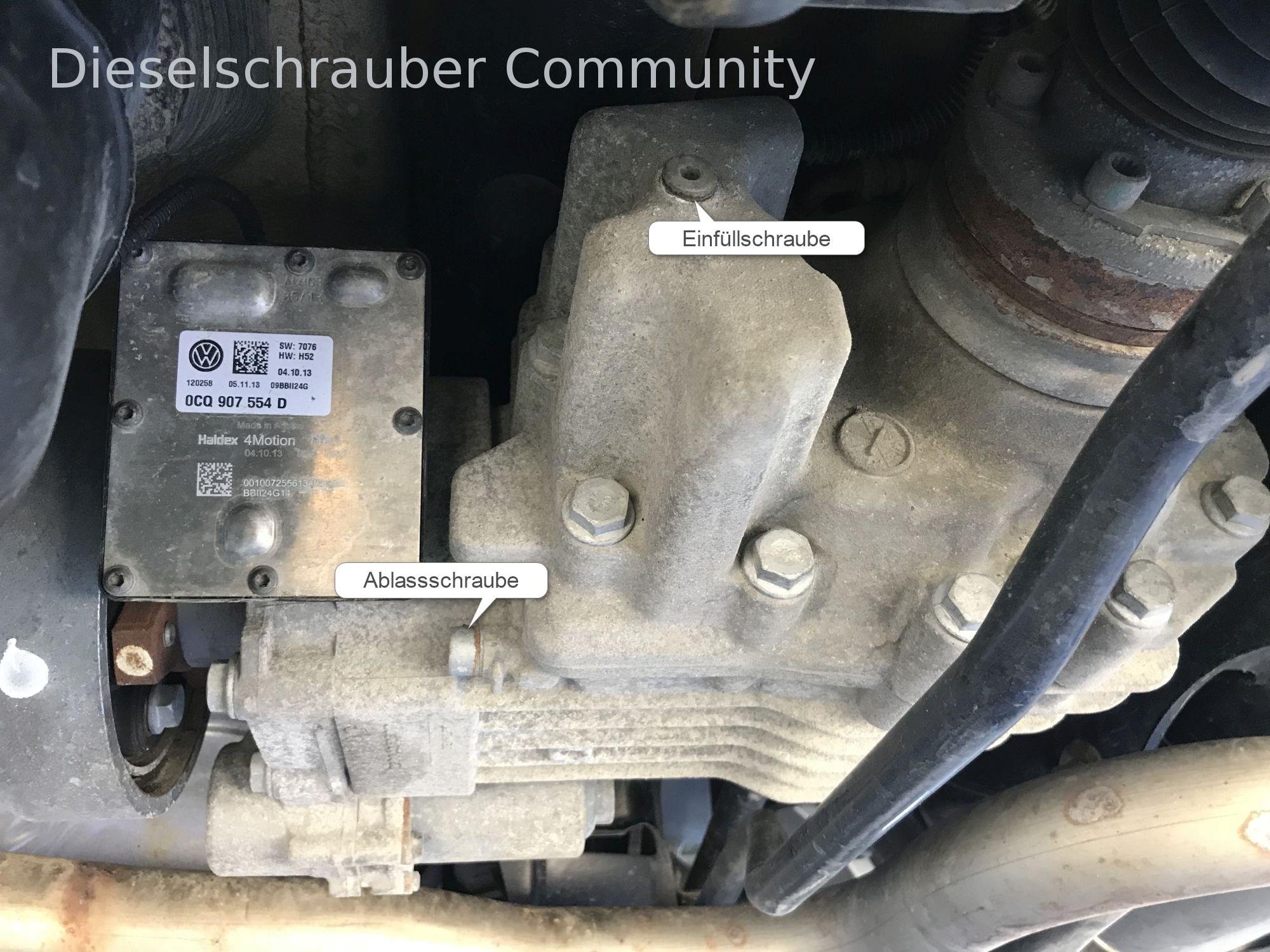 That is the correct fill and drain points, will need to unclip the haldex cable from module which is in the picture above then there are two clips holding the cable on and the haldex will come out.
2 T10 screws if I remember to receive the gauze ..
MY 14 S3 | Manual Saloon | Florett Silver | Revo Stg 2 | Revo Panel Filter | BMC 200 Cell Powervalve Exhaust | Sachs Clutch | TT Inlet | Superpro ARB & Links | VWR Springs | Wagner Intercooler | RS6 Calipers & 390mm Discs | 20" Oz Racing Legerra HLT |

From the service manual:

– If necessary let the excess oil flow out until it only drips.

The oil level is correct when the oil drips out of the oil filler hole.

This youtube video is for the older Generation Haldex, but from all the searching I've done, it's the same drain and fill procedure, but Gen 5 has no filter to be replaced, and you must remove pump and clean the built in screen/filter on the pump itself-
The drain plug is indeed what we should have listed for Gen 5, part number N91082701

And so I assume after all this searching that I was sent the drain plug for differential, not the correct one for Haldex, which should be part number N91082701-I will now contact ecs and let them know my findings. Also, searching for A3/S3 Haldex drain plug from online parts is very sketchy, it seems they all have wrong/limited info.

Ecs does have the drain plug, but it's listed as compatible with the Golf R. For Audi, they incorrectly sell the drain for the Differential.

I'm heading over to the Audi dealer-finally found this listed, with very little info on the page:

Here is a DIY oil change video for the haldex gen 5 unit:

Yep, I also watched that one-but nowhere in the Volvo video did he remove a drain plug-so I guess he forgot to, or on the Volvo Haldex draining is accomplished by removing the pump

The VW vortex DIY seems most relevant, and as mentioned, the same drain plug for the Audi Gen5 Haldex:
http://forums.vwvortex.com/showthread.php?8908177-MK7-Haldex-Fluid-Change-DIY

I just picked up the drain plug at the Audi dealer.
Ecs did not answer my email, I pointed out that the plugs I was sent were for the differential, not the Haldex service- 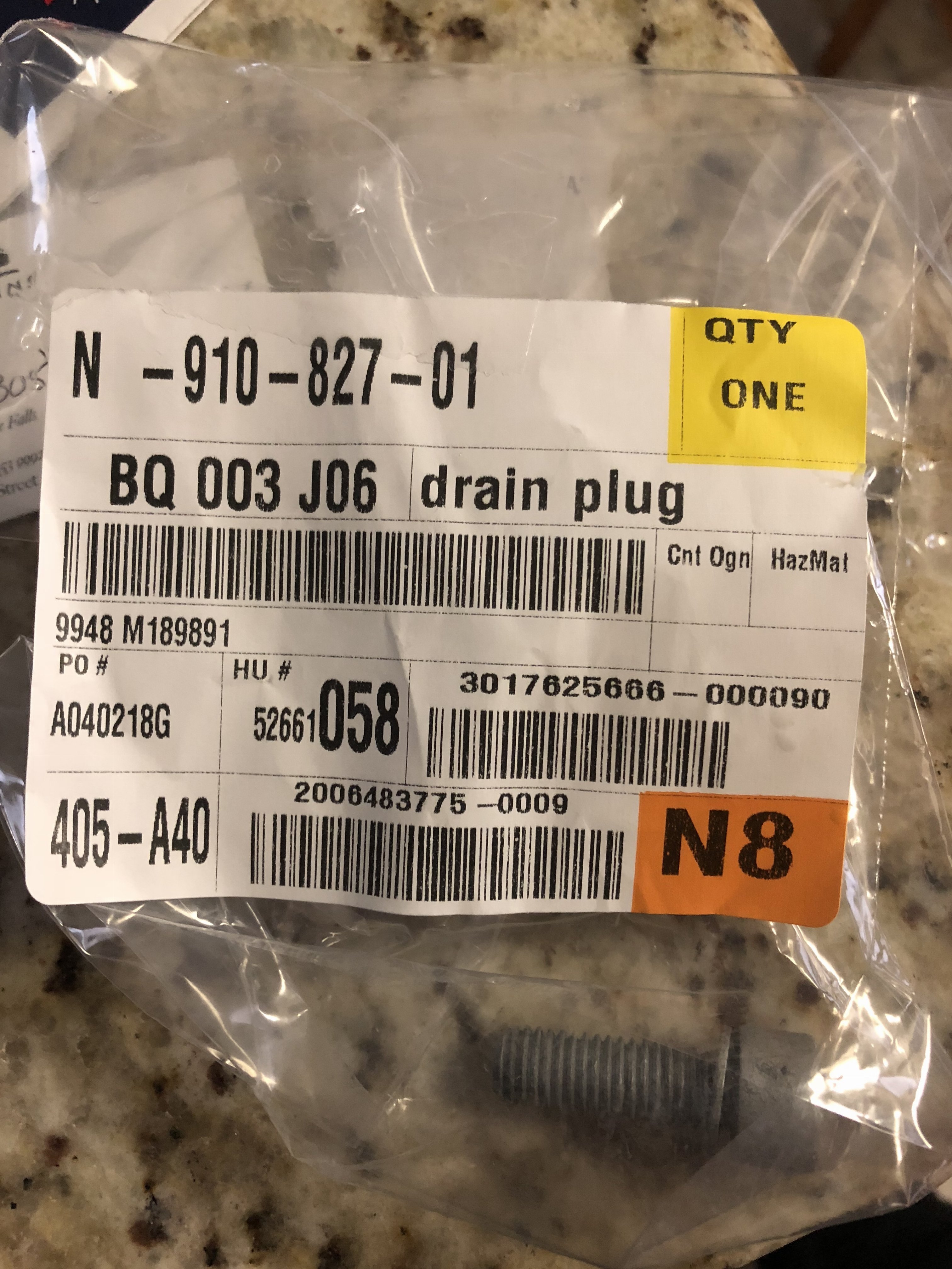 I find ECS to be much less knowledgeable these days. Back when they were a small outfit run by enthusiasts that knew 1J was a MkIV platform code and 5G is a MkVII platform code, they were much more reliable. They actually shipped me a MkIV wagon tail lamp as a MkVII part- and it wasn't just a case of pulling the wrong box and not looking. After I received it, I looked back at their website to see if they had photographed it and uploaded the image of the MkIV part as a MkVII part- and they did!

It was a case of being the first to order the part... I gave them the part numbers, they created the listing without photos since they'd not had the part before, and they ordered the part. When it arrived, they opened it to photograph it and then sent it on to me. Come on- really? They've grown to the point that some of their help is likely 0% interested in the cars like we are.
2015 S3 Exclusive Edition, Vegas Yellow
+ EU FL Tail Lamps

Just finished this today. Looks like I could have reused plugs, I’ve heard that’s what they do at dealer service...
If the washers are sold separately, that’s what I’ll do next time-

It wasn’t too bad-the drain plug is very long, it wasn’t stuck in there but I’d did take forever (laughs)
I waited for it do drip without removing the fill, and when that came off it gushed out pretty good.
The screen was t too dirty, but with a white paper towel I cleaned it and could see it was grey with faint sludge, and the same for the cavity once the pump was removed. It was better to dangle the pump carefully instead of unplugging it. Upside down it drained, and after cleaning with paper towels I sprayed brake cleaner on the filter mesh and then more paper towels. The pump I used was perfect, same one from the VW vortex diy.
I went beyond 650 ml, around the block, then let excess drip out like the service manual says to do-

Following up that ECS never answered, and I imagine they still have the wrong drain plug listed.
In any case I image one could re-use the plug, or search for the aluminum washer only.
Not sure many people are aware the fluid has to be drained every 3 years regardless of mileage-

JB911 said:
Following up that ECS never answered, and I imagine they still have the wrong drain plug listed.
In any case I image one could re-use the plug, or search for the aluminum washer only.
Not sure many people are aware the fluid has to be drained every 3 years regardless of mileage-
Click to expand...

I reused the plug with no issues, also I will be changing the oil and cleaning the gauze every year. Along with changing my engine oil every 6k miles/year