no smoke without poke

So this finally turned up today do we have to have the work done?. I've read on a few other German forums there was a noticeable loss in power

after the work. Is it just a remap they perform I have a 170 quattro thanks 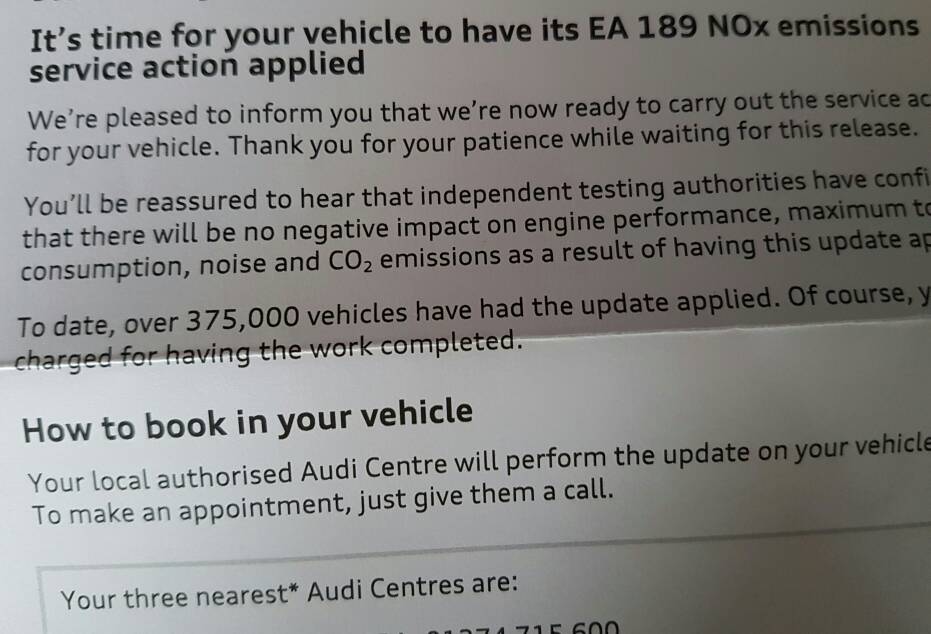 After reading too many tales of woe about EGR valve assemblies expiring shortly after having this work done ( and having to foot the bill!) my niece has decided to not take her 2010 1.6 TDI A3 cabrio in to have the work done.....
She has no immediate plans to sell the vehicle, and figures that it could always be done at a later date if it really must be done...
'06 Phantom Black A3 Sportback 2.0 TDi S-Line OEM Xenons, Open-Sky sunroof, Audi Symphony 6 CD changer & Bose,Heated black Vienna leather inc electric lumbar adj,Folding & dimming mirrors, storage pack,interior lighting pack ,18" BBS Pescara alloys,OEM Bluetooth phone prep & LED Rear lights.

Got mine today as well for my 170 quattro. Put it straight in the bin. No chance are they messing on with my car.
R

My mum has a Golf 1.6 bluemotion. On her way home from having the "fix" done just before Xmas, the car went into limp mode. Diagnosis was as mentioned above, issues with the EGR. Because it died on her almost immediately after having the work done, VW replaced the entire EGR assembly as warranty (best part of £1200 worth of work!). So I guess in her case it did her quite a favour!!

I've heard loads of people having EGR problems almost immediately after the update so not a chance in hell mines being done, plus mines remapped anyway so is probably running better than their standard map.

I'm hearing stories of people getting the by default when cars go in for servicing, I have the Audi extended warranty so my car has to go to the dealer, in fact it needs to go in at the end of Feb for a mystery water leak... worrying.

Thinking about it, I wonder if I don't have it done will I invalidate my warranty? Because all of the post-fix issues raised, I can also see a lot of rejected "wear and tear" problems... starting to feel like I should move it on, but actually had no plans to for at least a couple of years.
NULL

Had my company 2.0 TDi Bluemotion done a while back. Had an ongoing issue afterwards in which the car stuttered when you put your foot on
the gas at just under 2K Revs. Anyway thought it was a good excuse to get an APR remap done. Still got a slight stutter very occasionally but goes like stink now. . Much improved overtaking ability now.

Interesting, maybe that's the way, map it out if it's done...
NULL

The Governor said:
Interesting, maybe that's the way, map it out if it's done...
Click to expand...

The good thing is that although goes a heck of lot quicker consumption hasn't been affected. Still returns over 60 mpg.

Just putting the word out, this group is trying to get something going to get VW to take it seriously
NULL

No idea why that link is showing as a video, it's a link to the VW Diesel Facebook group...
NULL