Thanks Guys.
Is the problem still there with Dunlop Tyres ?

mickyh7 said:
Thanks Guys.
Is the problem still there with Dunlop Tyres ?
Click to expand...

There seems to be too many cases over the last few years, and still recently, where there are problems (with the 21's at least) to know if it will ever be rectified.
NULL

Win Win then. I can vouch for the Michelins feeling like a great tyre, and will try to keep this updated with how they wear (although I only do about 8-10k miles a year)
NULL
J

I was about to buy a couple of these as my fronts (contisports) need to be replaced. Very glad I read this thread! Seems like a pretty common problem with the 21s. I will go for PS4s now, my wallet says 'ouch'!

Sent from my GM1913 using Tapatalk

Anyone tried these yet? Seem like a great price. 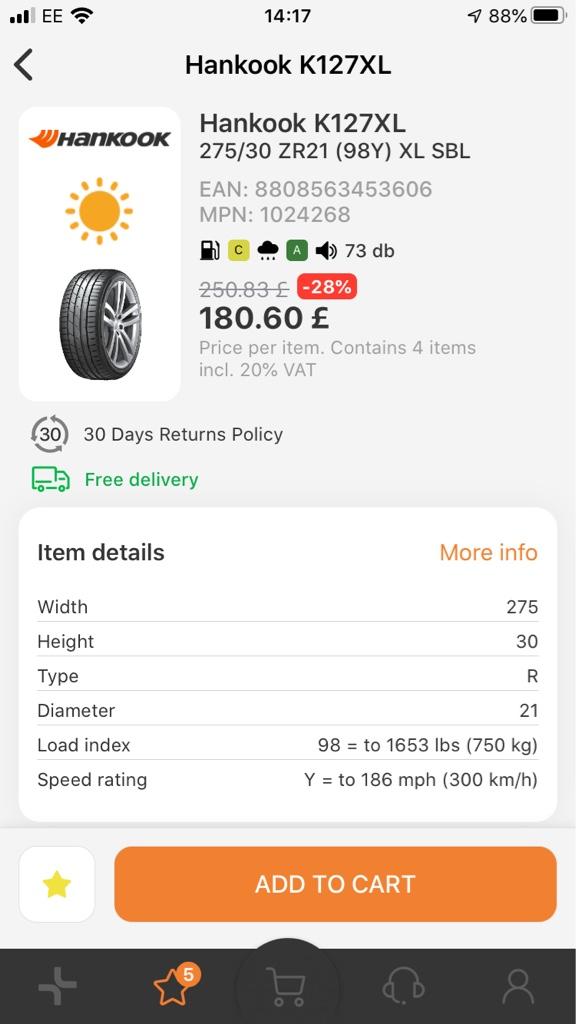 PS4s fitted for the fronts yesterday, looking and feeling good. Will be interesting to see how they perform over time. 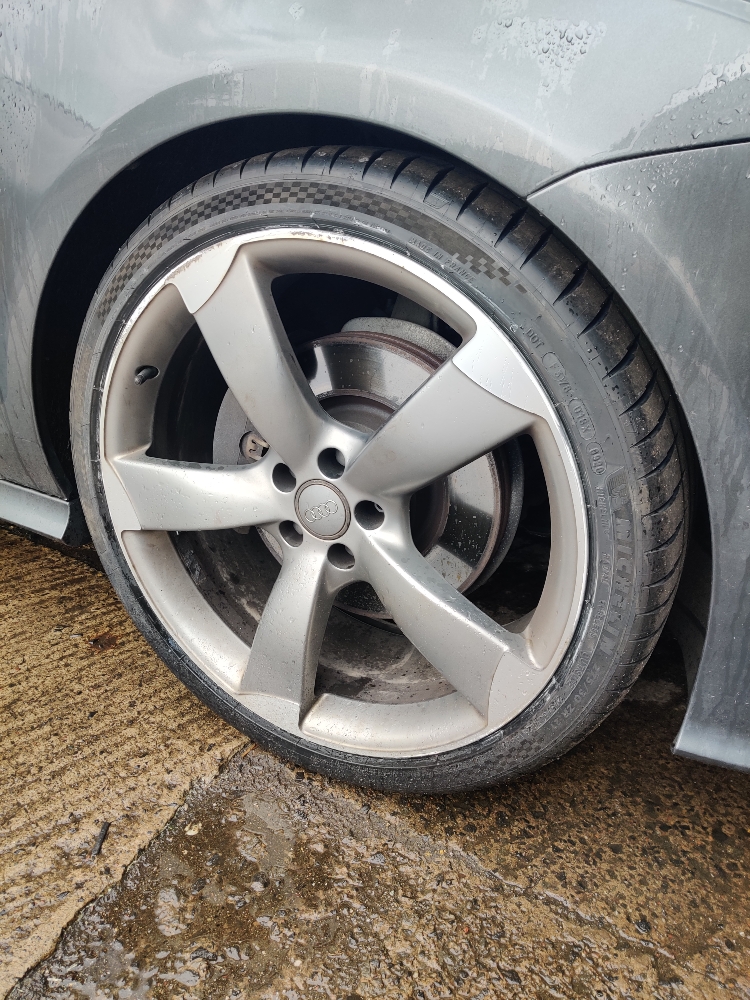 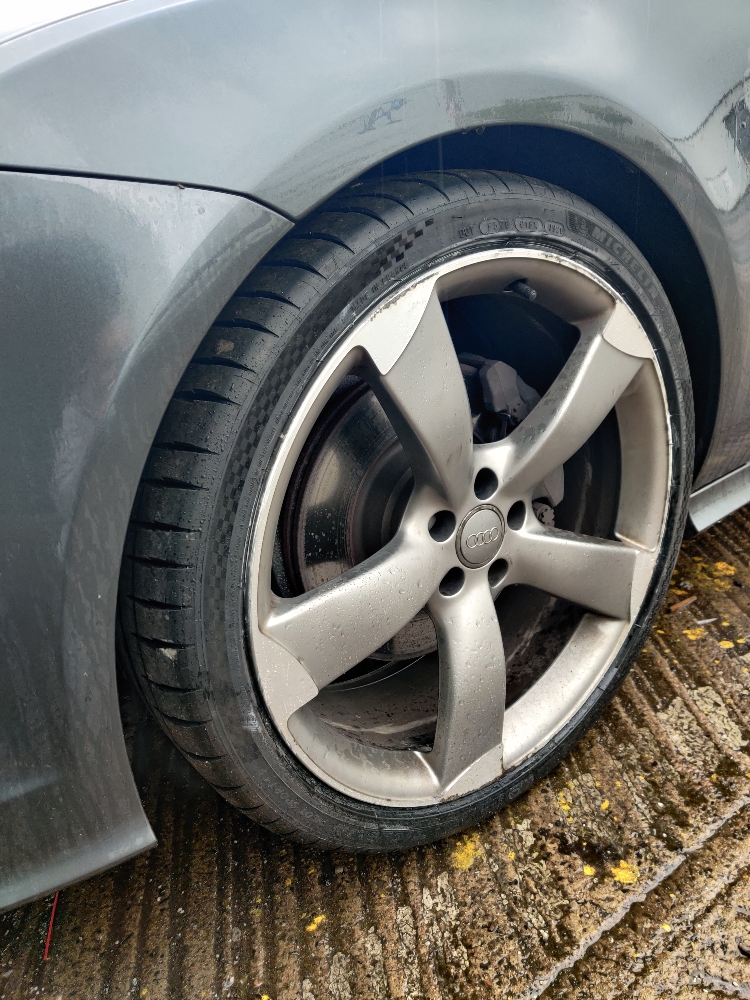 Sent from my GM1913 using Tapatalk

i have this type of tyre and heard this common issue so keep an eye on mine inside and outside walls.
OP had 265/30/21 and i have 275/35/21 dunlop sportmaxx and mines are old and fine with no splits maybey its the size relation to wheel that stresses out the sidewalls? or the lower profile taking the pot hole pinching worse
on oe 21" rotors 9 or 9.5j cant remember until i take wheel off sorry
Anyway it shouldnt happen and how did the warranty claim go?

Update: The pandemic (and life) had put returning these on hold, but just booked a courier to collect them Tuesday to send back to the supplier. Didnt realise that some couriers have tyres on their prohibited item lists, but used interparcel in the end and booked with Tuffnels. Watch this space..
NULL

have a look at this thread guys. I had dunlops on my A7 and it just caused me stress and anxiety. Kept getting punctures at first, cause obviously you can't see that your tyre is cracking on the inside. Thankfully this never happened at high speeds but the inconvenience it caused was a massive headache. Not to mention how much they cost. Anyway I bought more dunlops (stupid error on my part) and same happened. It was beginning to drive me insane until I found this thread and it dawned on me that I'm not cursed, its just Dunlop manufacturing **** tyres. Based on the other thread, it's clear that dunlop aren't of much help but they need to be held liable. It's a potential death trap

Just a quick update, getting on for 10 weeks now and nothing back from Dunlop. Supplier says they will write to both of us with their findings. Guess I just have to wait
NULL
A

I should have updated this months ago so apologies!
I too had the same cracking issue. Had it the first time and changed all 4 not thinking anything of it but when it came back again with fairly low mileage since the fitting (at Audi), I raised it with Dunlop.
It took a long time - around 3-4 months from memory but essentially Audi had to fill in a form per tyre regarding the condition and how much tread was left etc.
They then had to send them to Dunlop but because Audi get them via a supplier, it was essentially Audi to Supplier to Dunlop hence the delay.

Dunlop UK fairly quickly then shipped them to another factory which I believe was in Germany somewhere. Once all 4 were in Germany, I got a report back from the UK office around 2 weeks later to essentially say they were sorry I had problems with the tyre and have advised a dealer allowance per tyre towards the cost of replacing each one.

This equated to % of how much I paid per tyre (roughly) .
Once again, there was then a delay where the tyre supplier got the funds first from Dunlop. This was then passed to Audi and then Audi to me via bank transfer.
This was after around 28-30 days from rec the report.

Given the cost of the 21's, the refund covered 2 new tyres so I still had to shell out for another 2 out of my pocket but I just decided it was best to take what I was given and not use Dunlop again for the A7.
The A3 we have on the other hand were also on Dunlops and had no issues at all with the 17s (I think or maybe 18) taking a fair bit of beating and mileage and so we stuck to Dunlop on the A3.

Might help some of you - the key thing is take loads of pictures. Get the dealer or whoever to also take pictures. Once the tyres are out to Dunlop, you will not see them again so without evidence, its your word against theirs - having said that, the entire process was fairly smooth and no questions asked...just long.
Also bear in mind the buck stops with who supplied (and fitted?) the tyres not Audi but if Audi supplied them, they will deal with their suppliers as you are not allowed to - even though their supplier in my case was someone who I have used many times directly.
NULL

So last week I managed to get to email and speak to a very helpful guy at Dunlop UK, who I gave my reg to so he could see if there was any update on the tyres. Nothing on their system.

He said I should be able to get a claim number from the supplier which would track the case. A week I waited for an update, and eventually got a reply (not from Dunlop) to say that they would refund me 50% of the cost of the tyres.

It is worth it even if it just out of principle.
I got my refund and apart from chasing up every so often, I did not need to do much. In my case the amount was driven by the amount of tread left which resulted in a pay-out covering for the equivalent of 2 new tyres.
It is a long process as in my case, Audi supplied and fitted but they have their own supplier so it was essentially a refund from Dunlop to supplier to Audi and finally to me by for £600 odd refunded, I was not complaining.
NULL

To clarify, it's not that I'm after any more money.. I feel that it may not have even got to Dunlop as it seems the supplier of the retailer has authorised it. My worry is that more could go unnoticed and cause potentially fatal accidents. I guess that's why I started this thread in the first place, even if it was just to highlight an issue and have others make an informed decision.

I appreciate everyone's input on this, thanks.
NULL

Cracked windscreen on A7 - warranty claim?