My 2020 A6 Sport Quattro 45 TFSi Automatic stalled on me resuming from auto-stop turning right across traffic last week. I had to completely power off and restart the car to get it going again, by itself the starter wouldn't work as normal. This put me in danger. Then 24 hours later it was a bit shuddery all of a sudden in slow moving traffic, and at a traffic light the auto-stop kicked in. Suddenly I heard a chime and an MMI warning came up that the Cruise Control was no longer available. Then immediately afterwards it simply alerted Drive system: fault. Please contact workshop. I had to be recovered, despite being 10 mins from home. I was told that if I drove home I could be liable for damage. The error cleared itself after the car had been switched off for a while. Luckily I had looked at the phone app and taken a screenshot to get the exact error text.

The recovery experience by Audi Assist was not good. I was told under one hour which then turned into two hours, and the job was subbed by the AA to a third party. Since it was out-of-hours and since my car was loaded with belongings from a trip away, I was recovered to home, and then onward to the dealer the following morning. I asked my dealer and my leasing company for a replacement vehicle and was repeatedly denied. The leasing company pointed me to the warranty, and the Audi dealer claimed they needed to do a technical investigation first. This was wrong - Audi Assist (really the AA) were meant to book me a vehicle rental via Enterprise but they failed to do so. It took two days for me to discover this via Audi Customer Service, and now I do at least have a loan car.

The only bit of work my car had done was the starter-alternator recall last summer. I was a very light user of the car even before Covid-19's impact, so it has only done 2400miles - which leaves a pretty poor impression of the brand's reliability. The really concerning thing is that I had driven my family the length of the M23 on that journey - a smart motorway now, so if the fault had happened then would have been placed in very significant danger. The recovery truck driver told me the AA won't even recover from smart motorways now, on account of that risk.

Anyone else had a similar issue with their car? It's been with the dealer since Thursday morning (so this is the third working day) and they cannot determine the fault apparently. They have escalated to Audi.

I stopped in a traffic jam on the M6 about 18 months ago, the engine stopped, auto handbrake on, the traffic started to move so I pressed the accelerator and the car stalled. I had a ‘transmission failure‘ message, I had a panic as I was in the fast lane not moving, I turned the ignition off then restarted the car and it was fine. I figured the handbrake didn’t release quick enough so the car stalled.
2021 Q5 40TDi S-line

Happened to me when I picked mine up from new, stopped in traffic going up a steep hill. I stopped and put it into "P" and no sooner had I done that, I had to move off again. It was then it cut out and all sorts of errors appeared and the car started to roll backwards. Luckily I put my foot on the brake and switched the ignition off/on and the car then worked as normal.
I put it down to putting the car into "P" and then back into "D" so quickly. It also happened a second time under similar circumstances.
2018 A6 Avant, Floret Silver
V 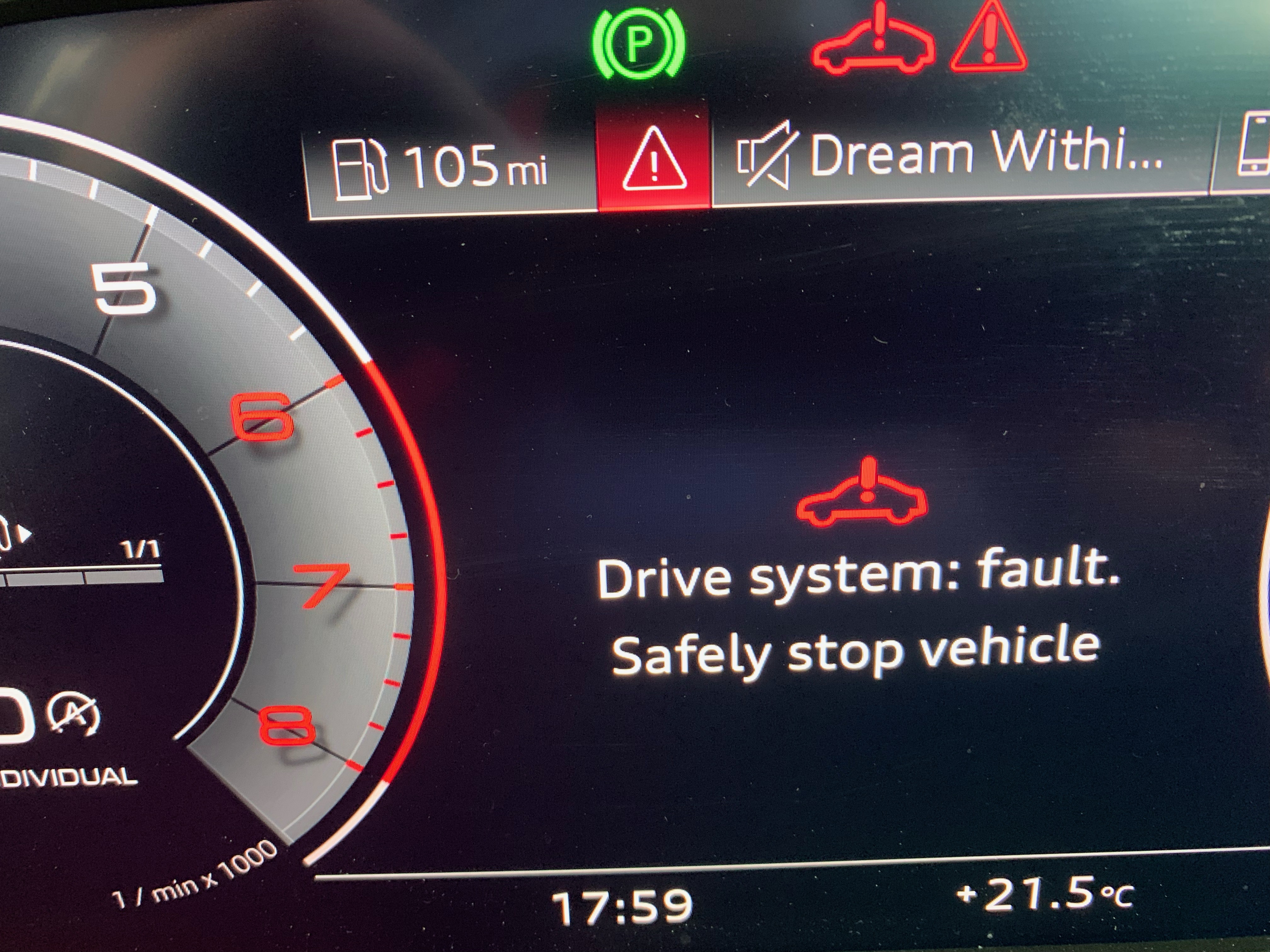 I forgot to post back here with what happened. The garage had to escalate the matter to Audi. Apparently the diagnostic software advised replacing the ECU. However Audi recommended not to do that until they had reviewed all the data. I was without my car for 3-4 weeks I think and in the end they did replace the ECU and apparently updated all the software.

It hasn't happened since. My own hunch is that it was a software edge case. The guys in the garage thought it was very unlikely to be an equipment failure.

I lease my car so I cannot take any chances with a warning like this, but I would still not advise you drive it after this kind of fault since if something did happen that destroyed the gearbox, Audi would be able to determine from the logs that you ignored the warning.

Just had another failure chime while driving: SOS Call System Partial Fault: Call Workshop. Then the yellow error warning symbol went away after a few seconds. Very strange. Anyone else had that?

No, but I’ve just had two faults connected to the headlights. High beam assist and adaptive control. Disappeared on restarting.
A3 8P 3.2 Quattro DSG 2005
A6 C8 40tdi Blackline 2021
You must log in or register to reply here.

Quattro System on A6

Quattro System on A6