More comfortable, more agile, more efficient, more protective and better connected - the all-new Audi Q5 is about to build on the consistent sales success of its predecessor with an even stronger skill set, firmly securing it once more as a cornerstone of the Q range and a standard bearer for the brand’s uncompromising pursuit of progress.

Orders can now be placed in the UK ahead of first deliveries during April for Q5 models in either SE, Sport or S line specification, and pricing starts from £37,170 OTR for the 2.0 TDI quattro 190PS, rising to £41,040 OTR for the 2.0 TFSI quattro S line.

Strong specification is just one of the factors contributing to a residual value that is not only the highest in its segment, but of any Audi model ever at launch – over three years/30,000 miles, the Q5 2.0 TDI quattro S line S tronic with 190PS is predicted to retain an exceptional 58.3* per cent of its original value, while every other Q5 model in the range achieves an RV over the same term of at least 55 per cent. Independent automotive valuation experts, CAP Monitor also rate the RV of the Q5 2.0 TDI quattro S line S tronic at an impressive 57 per cent over the same three year/30,000-mile term.

Typically Audi: quattro design language
The new SUV from Audi has a defined and taut stance. A sculpturally flared Singleframe grille with a solid frame dominates its aerodynamically flat front end. It is fitted with Xenon headlights as standard on SE and Sport models and all-weather LED headlights with a signature Q design on S line. High-resolution Matrix LED lamps with dynamic indicators can be chosen as an option regardless of model.

A distinctively curved and strongly undercut shoulder line gives structure to the side view. The strongly emphasised wheel arches are a reference to the quattro permanent all-wheel drive system, and the low greenhouse tapers back down early. Just as at the front, horizontal lines at the rear convey an image of width and presence. The tail lights are also available with optional dynamic indicators. The tailgate wraps around the C-pillars – a typical feature of the Q models from Audi. A diffuser insert integrates the exhaust tailpipes.

Weight saved: up to 90 kg lighter than the previous model
4.66 metres long, 1.89 metres wide and 1.66 metres tall with a 2.82-metre wheelbase – compared to the previous model, the new Q5 has grown in nearly all of its dimensions. Consequently, the unladen weight was reduced – depending on the engine – by up to 90 kg. Steels with maximum tensile strength and aluminium form an intelligent material mix in the body.

The new Q5 also stands at the top of its class in its aerodynamics. The four-cylinder versions attain a cd figure of 0.30 with the aerodynamically optimised roof. Wind noises are exceptionally low, and vibration comfort is high – the new SUV from Audi indulges the driver and passengers with the best interior acoustics in its class.

Spacious and wide: the interior
The workmanship quality in the new Q5 is uncompromising. The interior offers a lot of space for five people, and it surpasses the previous model and its competitors in key dimensions. Its horizontally oriented lines underscore the impression of width and comfort, and a three-dimensional trim strip runs across the entire width of the instrument panel. The new equipment lines concept offers customers a broad selection of colours and materials.

A three-spoke multifunction steering wheel is standard. When it is dark, the optional ambient lighting creates an attractive atmosphere in 30 different colours.

The rear seat back of the new Audi Q5 is split into three segments. Longitudinal and seat back angle adjustment are optional. Depending on the rear seat position, the basic volume of the luggage compartment ranges from 550 to 610 litres, 10 litres more than in the previous model. When the rear bench is folded down, this volume grows to 1,550 litres. Cargo loading is simplified by a power-operated tailgate fitted as standard, an optional variably folding mat, optional hands-free control of the power tailgate and manual lowering of the body via the optional air suspension.

Simply coherent: controls and displays
Operation of the new Audi SUV is intuitive and is marked by three great new features. The optional Audi virtual cockpit presents brilliant graphics on its high-resolution 12.3-inch screen. The driver can choose from two views – a classic view with large round instruments and a mode in which the navigation map or lists dominate.

The MMI terminal in the centre console acts as the main control element. In the top infotainment system, the optional MMI navigation plus features an 8.3-inch display and MMI all-in-touch incorporating a touchpad built into the rotary controller which recognises haptic feedback. The interactive system is able to comprehend handwritten entries as well as gestures familiar from consumer electronics such as zooming gestures.

The MMI operating logic is based on the flat hierarchies used in today’s smartphones, and it offers such features as intelligent free-text search. The new natural-language voice control function also recognizes inputs from everyday speech.

Audi can deliver a newly developed head-up display as an option. It projects relevant information onto the windshield – including from driver assistance systems – as symbols and numbers that can be perceived quickly.

Audi navigation: “Personal route assist”
The new Audi Q5, like the Q7 and the A4, has a self-learning “personal route assist” function. After activating this function, the navigation system learns the routes and destinations that the customer regularly selects, and it associates this information to the parked position and time of day.

For as long as it is active, the system therefore learns from the customer’s behaviour and uses this information to suggest optimised route planning for the next trip – even while navigation is inactive. The navigation system incorporates the three most likely destinations into the calculation, taking into consideration both the arrival time and current traffic levels. For instance, the system can suggest that the customer activate navigation to find out about potential alternative routes. The driver decides whether or not to activate the function. He also has the option of deleting saved destinations. If the function is deactivated, the system does not store the destinations and does not consider deleted destinations or the routes driven.

Online via LTE: MMI navigation plus
Sport and S line models take advantage of an SD-card based MMI Navigation system, supplemented by a three-month free trial of the Audi connect suite of services. As an alternative, MMI navigation plus with the intelligent handwriting recognition technology of MMI Touch unlocks a full 36-month subscription to Audi connect via an embedded SIM with no data charge.

The free Audi MMI connect app produces a close interconnection between the car and smartphone or a smartwatch and offers other services. They include remote checking of important vehicle states, online media streaming and transmission of a calendar from a smartphone to the MMI.

Driver assistance and safety systems
In its driver assistance systems, the new Audi Q5 also tops its segment with a broad range of high-tech options. In their intelligent interplay, the systems represent a next step towards piloted driving.

The predictive efficiency assistant helps the driver save fuel by specific information on the car’s surroundings. Adaptive cruise control (ACC) can also ease strain in slow-moving traffic, while Audi active lane assist makes it easier to stay in lane. Distance warning alerts the driver when the distance to a vehicle drops below a safe distance.

Cross traffic assist rear, the exit warning system, collision avoidance assist and turn assist are other new features that perform excellently in pursuit of safety. The same applies to the pre sense systems – Audi pre sense city is a standard feature which warns of pedestrians and vehicles and may initiate automatic emergency braking within system limits. Park assist, the camera-based recognition of traffic signs and hill descent assist round out the features.

Powerful and efficient: TDI and TFSI engines
The new Audi Q5 is launching in the UK with a powerful 2.0 TDI engine producing 190PS and a 2.0 TFSI engine with an output of 252PS. This petrol unit is capable of returning up to 40.9mpg combined, which equates to 157 grams CO2 per km. The efficiency champion is the 2.0 TDI 190PS: up to 56.5mpg combined is achievable in conjunction with a low of 132g/km, depending on wheel size. The also intensively revised 3.0 TDI, coming at a later date, increases output to 286PS with 620Nm (457.3 lb ft) of torque.

Versatile and efficient: drivetrain
The drivetrain of the mid-size SUV has been redeveloped from the ground up. Automatic transmissions integrate a fuel-saving freewheel function. The driver controls it by a selection lever or by shift paddles on the steering wheel; in both cases, the control signals are transmitted electronically.

For the V6 diesel, Audi can deliver an optional sport differential at the rear axle which distributes torque between the wheels as necessary and thereby provides a maximum of driving dynamics – this is another new feature in this model series and in the competitive field.

Resolving contradictions: the chassis
The new Audi Q5 enables handling that combines very different strengths – it is sporty while being extremely comfortable. Creating the basis for this are the newly developed five-link suspensions and also the new electromechanical power steering system. Dynamic steering is available as an option; it varies its gear ratio according to the driving speed and steering angle.

Customers can choose from two extension stages of springs and damping. The chassis with damper control offers a very wide spread between comfort and dynamics, which the driver can select via Audi drive select. In addition to adjusting damper control, the new adaptive air suspension can be used to vary the ride height of the car body over five stages.

In the standard system, Audi drive select, which accesses various technical modules, the driver can select one of as many as seven driving modes. The offroad mode emphasises the broad repertoire of talents the Q5 has when going beyond the beaten track.

The new Audi SUV comes from the factory with 18-inch alloy wheels (SE and Sport), and the S line package with 19-inch wheels. Wheels up to 20 inches in diameter are available as options.

The new Audi Q5 is manufactured at a newly constructed plant in Mexico. It will arrive at Audi Centres in the UK in the spring of 2017. 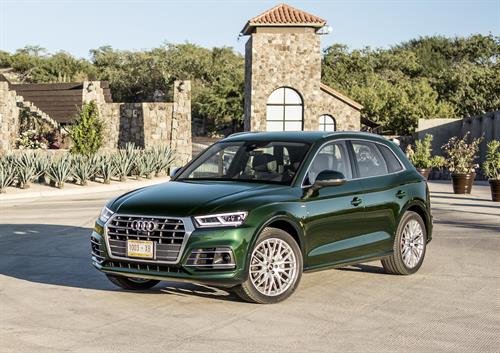 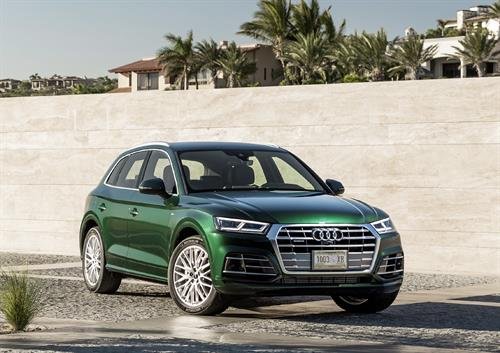 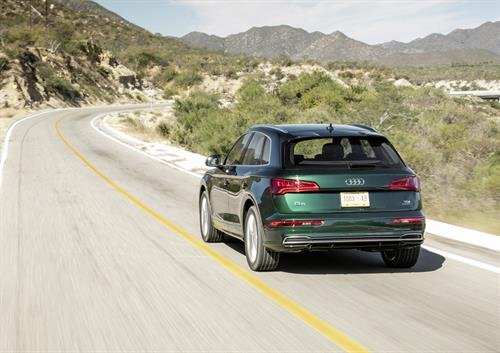 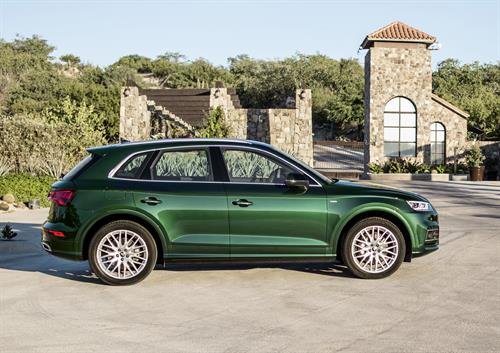 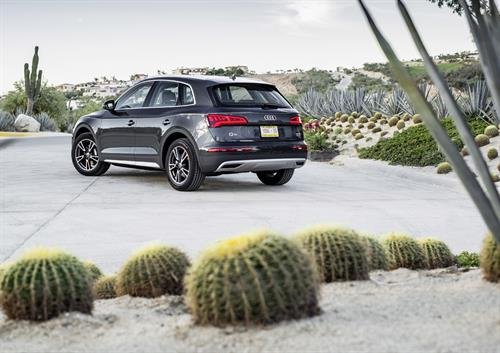 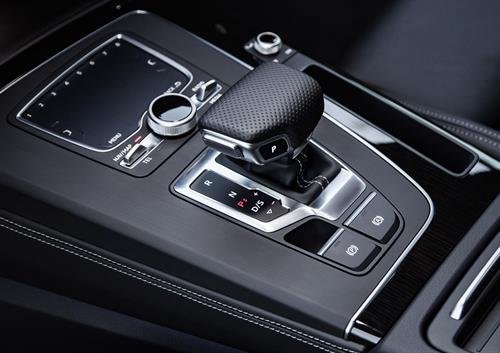 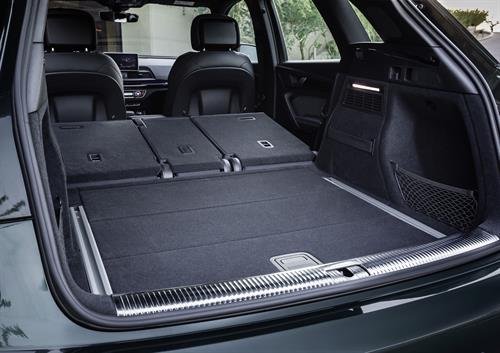 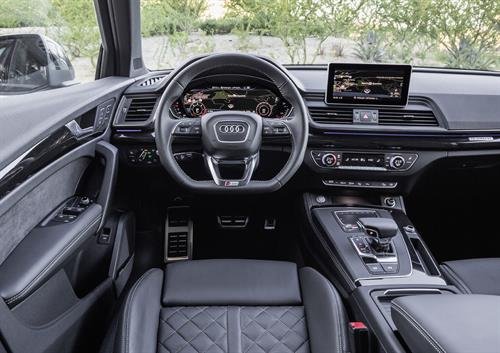 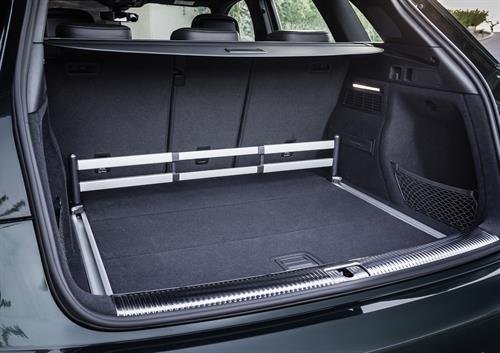 A
Q5 Something going on at Audi with the Q5

Q5 ALL-NEW AUDI Q5 IS A HIT WITH EURO NCAP

A
Q5 Something going on at Audi with the Q5

Q5 ALL-NEW AUDI Q5 IS A HIT WITH EURO NCAP