My apologies if this has been asked before:

I am now looking to trade my S4 in for a A6 3.0 TDI Le Mans Man Avant. Is there anything major to look out for, any common faults or any items that are a must have.

A friend of min has a 2.0 TDI (170) and that's OK, I just want the same but a bit quicker, how quick are these and whats available after a remap (safely)?

ANy help or extra info would be great either good or bad, cheers all!

I've been looking for the last 2 months, undecided on 2.7 or 3.0TDI quattro. I can tell you that the facelift models(2010 onwards I think?) are more economical, as they have later tech on it that switches the alternator off to save fuel. The 3.0 is is a lot more powerful and quicker than the 2.7, and they map to around 300bhp I think? The earlier 3.0 engines have weaker blocks I've been told. The fuel consumption between both engines are the same apparently in facelift trim, but in earlier guise, the 3.0 is more thirsty, especially for urban driving, as low as 25mpg according to a customer of mine that owns one, and that's not booting it everywhere.

Thanks JoJo, kinda what I was thinking and wanted to hear that alternative voice or reason, just got to find an 11 plate with a manual box now.

300 BHP is probably a bit far for me, as long as I can safely get the torque figure up and around 260 bhp then I will be happy.
Audi Q7 2020MY Vorsprung in Samurai Grey Crystal, Black styling pack, Grey Nappa Leather + diamond stitching, Black Piano & black ash inlays - Audi A8L 2019MY Executive in Silver metallic, Black Nappa Leather, Black Piano & black ash inlays, heated, cooled, massaging reclining seats front and rear​
See it here​
C

or if you want true petrol like power plant with diesel's torque and fuel consumption get a 535d beemer ... truly stunning performance (having owned one for years).
NULL

My wife has had an X5 35D from new and is now going to change it for either a 40D or she may hold off for the new Q7 with the twin turbo.

I personally prefer the Audi build quality over the BMW so not really interested in a 5 series. 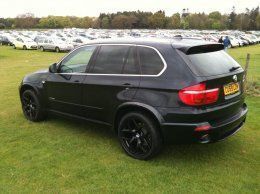 GeoffDunk said:
Thanks JoJo, kinda what I was thinking and wanted to hear that alternative voice or reason, just got to find an 11 plate with a manual box now.

300 BHP is probably a bit far for me, as long as I can safely get the torque figure up and around 260 bhp then I will be happy.
Click to expand...

Definitely go for a facelift model, 11 plate qualifies on that account, since if nothing else that will avoid the issues with the rear washer hose leaking all over the MMI unit. Think you will find it a challenge to get a manual 3.0TDi as most are auto (with the C7 platform you cannot get a 3.0TDi quattro with manual gear box). The Hard Disk based navigation (identified easily by the presence of joystick piece in the top of the MMI controller) is probably worth going for, if only for the larger display. Not sure when the switch over was but late in the C6 production run the Le Mans tag was dropped in favour of S-Line Special Edition (think the folks in La Sarthe go a bit upset with Audi and told them to stop) so be sure to include those in your search. Also probable that any S-Line with 19" wheels and Heated Front seats is probably a "Le Mans" spec even if the advertiser does not describe it as such. With an 11 plate you are right at the end of the production for the C6 platform so maybe worth also looking at early C7 platform cars as it a better car all round
Current: 21 A6 Avant 40TFSi Sport Vesuvius Grey/Black Twin Leather
Gone: 19 A6 Avant 40TDi Sport ;15 A6 Avant 2.0 TDi Ultra; 12 A6 Avant 2.0 TDi; 09 A6 Avant 2.0 TDi; 03 A6 Saloon 1.8T; 00 A6 Saloon 1.8T; 97 A4 Saloon 1.8T

I worked with a guy who had a new 3.0 Bi-Tdi and it matched my S4 from a standing start all the way to over "legal speed limit", I did out run him eventually, all friendly and a good valid test of both vehicles.

Sadly out of my price range for a second vehicle as they are too new.