So, this is kind of a noob question, probably, but my A6 had an engine swap in February last year, after the previous owner somehow managed to blow up an N/A V6. Still a mystery to me how that might happen...

Anyway, the engine hoist hooks/eyelet thingies are still on the engine, and I have to replace the cam position sensors, since they're leaking oil. Thing is, I can't get to the upper passenger side sensor's bolt because of the hoist hook. It's on there with 2 big-a$$ bolts with some kind of star pattern heads. I haven't seen those before.

Question is, what are thoooooose, and also, can I just pull them off there once I find the right tool/bit that fits, or do those holes need plugging?

Very few people on the forum will have removed an engine. I have, and I'm not sure what bolts you are talking about. Put a picture up it would help a lot
S

Thanks for replying. Here are a couple of pictures. First is the engine hoist "eyelet", which is fastened to the engine below the throttle body. Then the bolts. It's fidgety to get a picture of the bolts, but I think I managed. Never seen these before, so I don't know what kind of tool to look for. Tried searching for everything related to engine removal and hoists and whatnot, without luck. 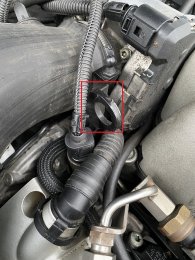 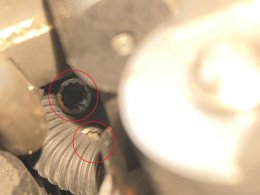 You won't find any tools with that sort of name as it does not exist. That is a spline/ 12 point bolt, so you going to need the correct socket looks like a M10 but could be wrong. I have a set similar to this https://www.toolstation.com/draper-tx-star-hexagon-and-spline-mechanics-bit-set/p66212

Yikes... so an M10 "triple square" will probably work...? I'm going to have a bear of a time tracking down something like that around here without paying with body parts. Probably about and arm, and a leg.

Thanks for the help and a starting point for my search!

- S
You must log in or register to reply here.

Has anyone painted an A6 C6 engine cover?

Has anyone painted an A6 C6 engine cover?