I moved some photo's around in my photo bucket and lost all the photo's, i couldn't edit the thread so thought i'd start a new one -

The car belonged to my landlady who i've know for the best part of 10 years, i rent a flat off her for work and last year she asked me to move into a annex at her house so she could rent my flat out to some other folks for a few months.
While i was living at her mansion i noticed the B5 sitting there looking unloved and asked her what the deal with the car was.... she explained it was their old family car that has been long since replaced by other Audi's.
So it'd been sitting for about a year then returned to the road for one of her sons to use, he used it for a month then got a company car and it was sitting then for another two years.

She explained that they'd had the car since practically new and didn't want to scrap it, and thought the fact it had been sat meant nobody would buy it without MOT etc

So she offered me it for free if i wanted to return it to its former glory..... a free Audi and at that a nice B5 i'd be stupid not to get it !! I gave her £50 to make it official
The only problem was the car was down in Somerset and i live in County Durham, a cool 300 miles away.... not having a tower i looked on Shiply for quote to deliver it and it was coming up around £250-£300
While i was looking to buy a tow bar to collect it myself a friend sold a car and delivered it in the south west.... he asked me if i wanted him to pick it up, of course i said yes and i now have the car home.

After a quick look over the car i found it was not great, moss growing out of every seal, so many spiders webs all over it and dust all over it....... it was also a right mess under the bonnet.
After a quick hosing down -

Cosmetic wise it's not too bad, few dents & scratches to deal with but generally good.
The lower door trims have rusted and are just hanging on there, so i'll be trying some cheap eBay replacements, if there no good i'll try and get some genuine ones.

The main issues are a rust spot on the roof, and the front and rear windscreen seals have corroded and split..... again nothing to worry about really -

Corrosion on the boot -

Some signs of water ingress in the boot -

after removing some panels -

I decided to get it powered up and check everything for working, so i went to halfords to pick up a cheap battery, they didn't have any stock so had to buy an expensive one, set to work changing the battery -

With a fresh battery on it fired straight up, idles great, AC is blowing cold still.... amazed really.
I took it for a spin down the street and the brakes are terrible, no surprise there mind they are rusty as hell.
But with the engine running i can hear a vacuum leak around the servo booster.... i removed the vac line and checked it for splits etc but unfortunately its ok, so i need to replace the booster.

Unfortunately i have the dead lines in the screen.

I then decided to spend the day washing all the moss of the seals / door shuts etc, after about two hours -

Still got to clean up the interior and "feed" the leather seats as they are dry and cracking.
All in all i'm over the moon with it.

As soon as i got the car i have been researching into the B5 and come across loads of V8 build threads, so i've put a deposit down on a full S6 4.2 40v engine complete wiring / ECU etc...

Thanks for reading and any comments,

Before i really start on the Audi i wanted to get rid of my previous project (4wd Seat Leon).... last weekend we took it to it's new home for a while.
Been busy preparing the car for its new owner.

My friend has taken the project on so at least i'll see it on the road, and get to give it a go.
The lad who has took the car has a unit which we will both be using - just got the keys, haven't even cleared out the previous owners rubbish -

Anyway back to the Audi... some parts came in -

Ebay lower side trim, they look quite good.... cost me just shy of £60 delivered... haven't got round to fitting them yet but very well packaged, and look ok -

Got a nice delivery from ECS Tuning in the USA -

Nice set of manuals to help me along the way...... the A6 one is more for wiring diagrams & mechanical 4.2 V8 info for when i pick up the S6 engine.
Also got some new clips & screw latch things for the rain tray as a few are missing, oh and a pollen filter -

So now i've got a nice empty garage it's time to get cracking on the Audi and get it sorted.

Still need to order a new exhaust - i think i'll just get a eBay stainless one for a S4 (2.5" twin system) that should suffice for the V8 swap.

Brakes still need to be ordered, not quite sure what to order yet i'm still looking into it, something meaty enough to stop it once the V8 is fitted

My plans are to get the Engine picked up from Scotland in the next few weeks, then store it and service it / check VVt units, change timing belts etc
I want to get the car on the road with the original V6 running then once i'm happy with the car and have the niggles addressed then swap the engine out.

Hopefully get some graft done next weekend, or at least have a V8 to photo and stare at

So this turned up today -

Took the wrapping off -

In the box is the engine covers, mounts, subframe, front crossmember, radiators and all sorts of pipes & brackets.

Gonna have to get cracking now !!!

Unpacked some of the box, got loads of parts.... even all the hydro-electric engine mounts and front chassis leg which houses the front right engine mount.

I've also had a quick look over the engine, some small oil weeps from cam seals etc which i'll be sorting before installation.
The cambelt looks to be in good nick, but of course i'll be replacing it anyway.. along with all the tensioners rollers / water pump etc.

Staff member
Moderator
VCDS Map User
Looking forwards to seeing this running. A guy called Siena on here built one years ago, but not seen one since. Always had it at the back of my mind that a V8 powered B5 would be pretty epic, but couldnt face the fuel consumption as a daily.
2000 A4 1.8T Sport Quattro Avant, Berry Pearl
2017 Nissan LEAF
1994 Range Rover 4.6 HSE
G

Yeh thanks Aragon, i've read Siena's thread many times in the past few months, lovely car he built...
I can't imagine the fuel consumption being to great either, it's not too important for me as it's just a silly weekend car, well it will be when i get it done.
Got a week off work in a few weeks so gonna get cracking on the car.... can't wait now

VCDS Map User
There is plenty more info on v8 swaps on audizine, as a few have been converted after sienna did his.

seen the thread title a few times and never clicked on it.. as soon as seen the leon I clicked who you were from when vagcars was a busy forum.. did the engine go with it? looking forward to the build now lol
NULL

Dont replace it, Upgrade it !!

Staff member
Moderator
VCDS Map User
Not surprising really, he had a small garage business and whatnot back in the day, he just vanished off the forum when all the **** happened. Probably kept the business going.
2000 A4 1.8T Sport Quattro Avant, Berry Pearl
2017 Nissan LEAF
1994 Range Rover 4.6 HSE

Keen to know what (if anything) happened here? . .

Staff member
Moderator
VCDS Map User
I've still got a plan on the back burner, i've been watching 4.2 cars on ebay for a while, and missed some pretty cheap donors. However i think if i'm going to the effort i probably want an S6 engine, as its the same work and 40hp more, but the S6's tend to sell for a bit more. Oddly the S6's are much less predictable, some really **** looking ones sell for stupid money. I guess i need to find one with a blown trans and that should make it cheap!
2000 A4 1.8T Sport Quattro Avant, Berry Pearl
2017 Nissan LEAF
1994 Range Rover 4.6 HSE

Updates on this?
A

Staff member
Moderator
VCDS Map User
well on my part i've got a 4.2 A6 on the drive just now breaking for parts. Once its stripped and the shells gone, i'll get started on getting the engine into the A4.
2000 A4 1.8T Sport Quattro Avant, Berry Pearl
2017 Nissan LEAF
1994 Range Rover 4.6 HSE 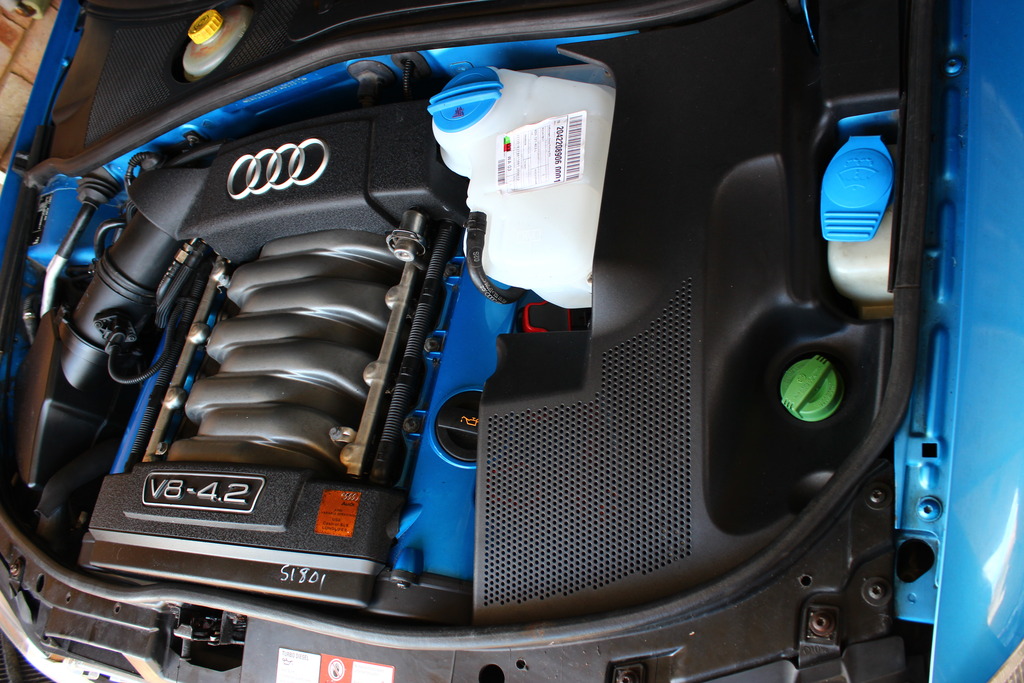 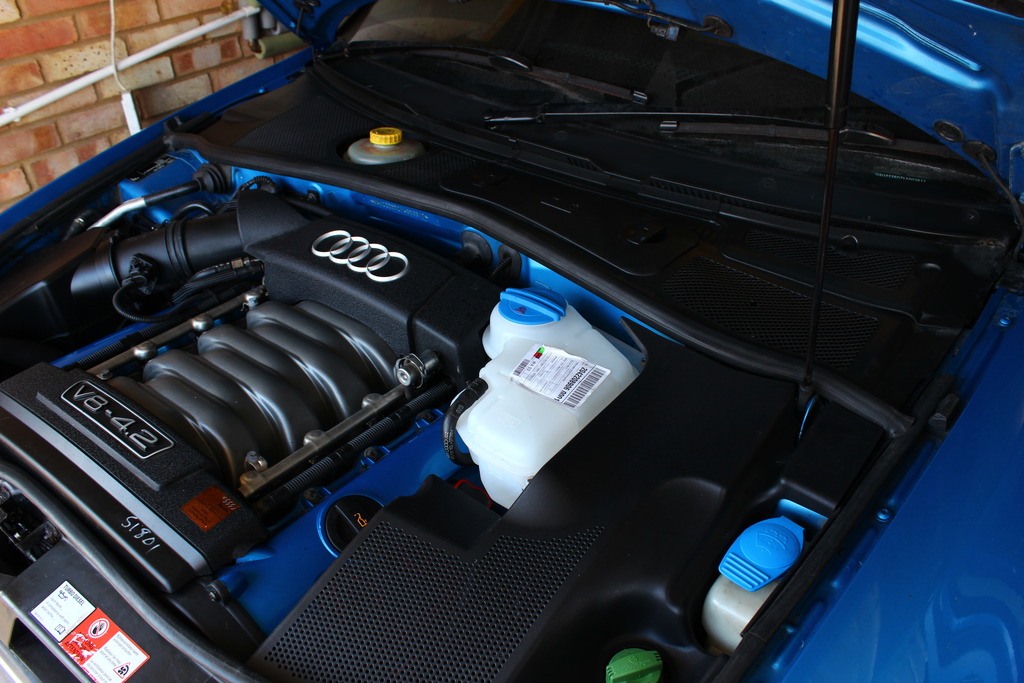 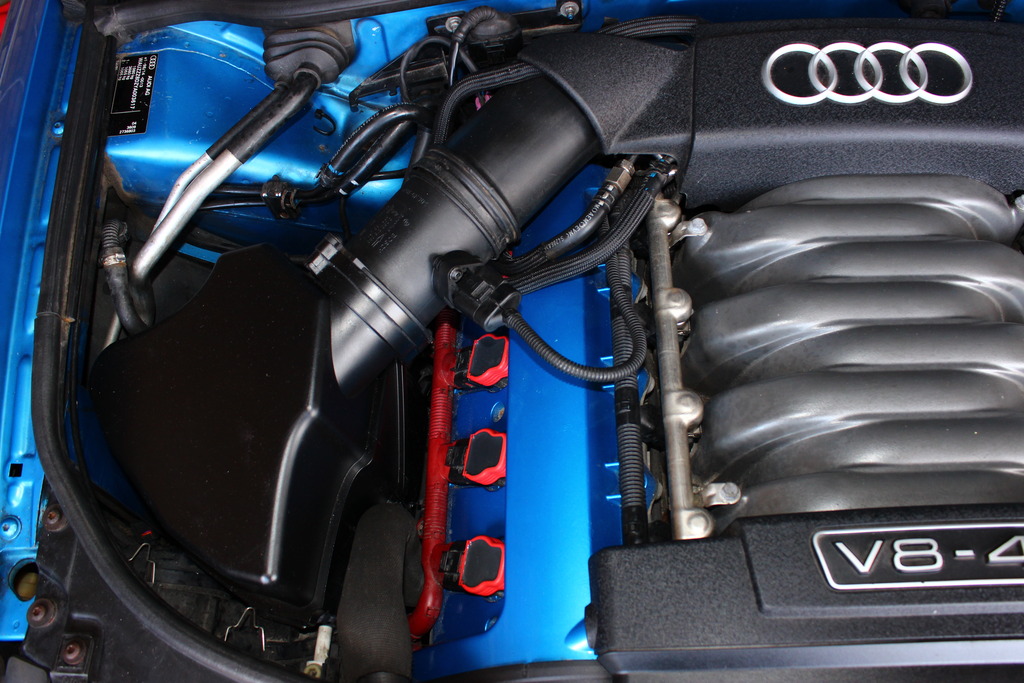 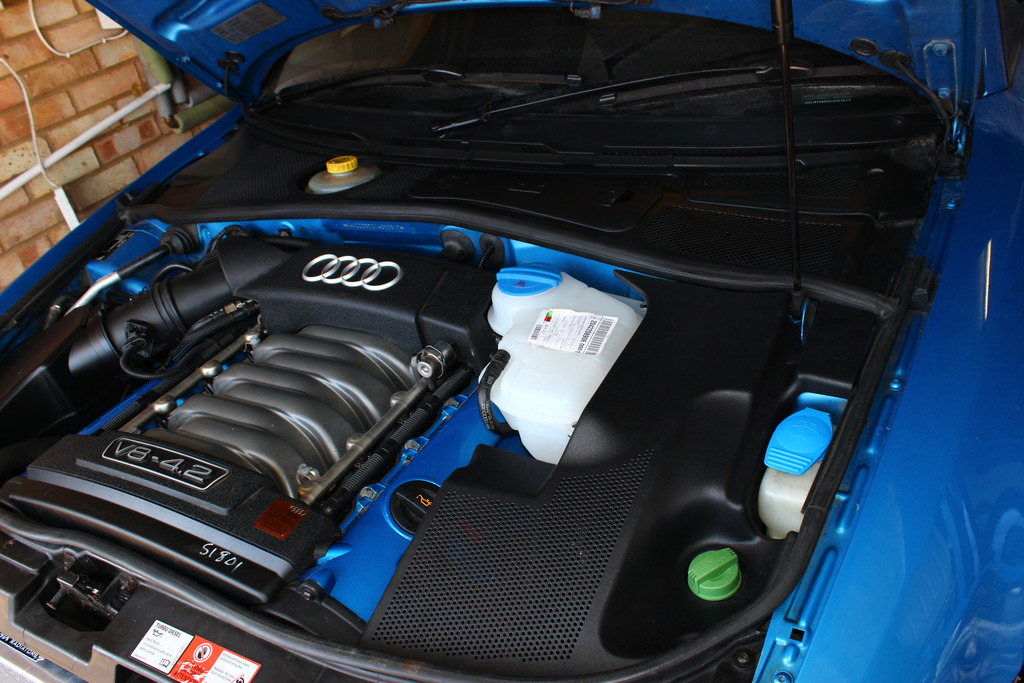 Greyham duuude, what was the result Got everyone on tender hooks!

Thread to watch!
NULL
You must log in or register to reply here.